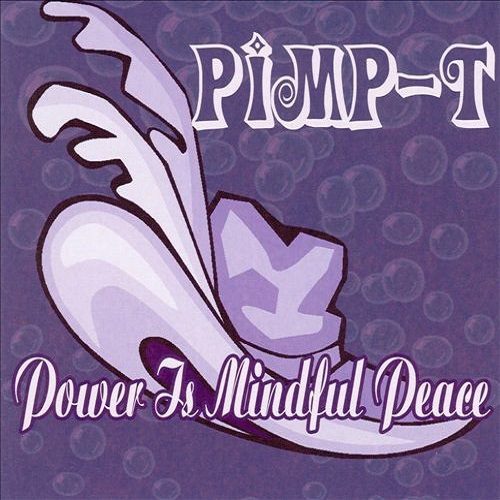 There’s no way this CD will receive even one rating point at the end of this review. It would be absurd. Giving this album any other rating than the lowest possible would be disrespectful to anybody who busts his ass to provide hip-hop fans with good music. Believe me, when it comes to hip-hop, I can take a joke. Bad or good, funny or not. But that’s besides the point. The question is not if I’m offended by the joke that PIMP-T apparently is, I’m offended by the awful music he makes.

PIMP-T is the rapping, retro-dressing alter ego of Troy Neilson from Fredericton, New Brunswick. Legend has it that he provided his high school and university basketball teams with hip-hop flavored warm-up tapes. His knowledge of the matter led to him writing record reviews for his university’s newspaper, The Brunswickan. At some point he started to rap himself, coming up with the PIMP-T Project in the summer of 2000.

PIMP-T is a comedy act and everybody can see that, which is already an achievement. Some rappers are funny and don’t even know they’re funny, while some think they’re funny but they’re not. PIMP-T doesn’t fit into either of these categories. Why? Because he’s not a rapper. He may rap, he may rhyme, he may use themes and topics that are prevalent in rap music, but he’s still not a rapper. He’s a comedy act. Having established that, we can’t dodge the question: Is his act funny? Well, funny can mean different things. Is the fact that Troy Neilson, a lanky, red-haired white guy with glasses that dresses like a pimp straight out the 70’s funny per se? Or is what he does with it funny? And wouldn’t we have to see him live to be able to fully assess his comedic potential? Or does he tell jokes and funny episodes, does that make him funny? Let’s face it, the way you carry yourself is a big part of a comedy act, or else it wouldn’t be an act but just some guy cracking jokes. I’m led to believe that PIMP-T is to be experienced in a live environment when he can put his act on with all the props necessary.

That is not to say that his album won’t garner any laughs. In fact, I’d be surprised to find anybody who wouldn’t show any reaction of bemusement when confronted with the utter wackness of the music on this CD. Neilson raps in a hollow, muffled, strangled voice reduced to a whisper, veering along tracks even Wal-Mart would deem too cheap. It’s unbearable. Straight torture. Makes you want to curl up in a corner of your room, ears covered. Can you understand everything? No. Do you want to? Hell no. To appreciate this CD you’d have to be so open minded you’d have to walk around with an axe stuck in your cranium.

The “Intro” is in so far misleading as Neilson initially sounds like one of the legendary Last Poets. But as soon as you try to get into the lyrics, you’ll get hit with the stench of pure wackness:

“…risin’ from the East, like yeast
in the belly of the beast
I explooooooode
into your brain I do corrode
like an ‘International Man of Mystery’
smoooooooothe when I groooooooove
ain’t no shame in the name of Pimp-T”

“Power Is Mindful Peace (PIMP)” breaks down that name:

“A lyrical map resides under my cap
uppin’ the ante with this pure hip-hop rap
Takin’ it back to the ooooold days
spellin’ it out what my name says
like Naughty By Nature did with “O.P.P.”
I be the P-I-M-P to the T
[…]
So let’s see, the first P stands for Power
In the last hour the tower of power
has planted a seed and bloomed into a flower
seeded with greed, seeded with greed
[…]
The rest goes like this: I stands for Is
M is for Mindful, last P, well, that stands for Peace
Ain’t it wonderful and slightly powerful
how it all hold into once piece
My name be Troy, so unravel the ploy
graceful like a flyin’ V of geese
Power Is Mindful Peace
and we see that the acronym be
P-I-M-P to the T”

Now you know. So you see that PIMP-T isn’t your average women-exploiting macho. He’s one of them conscious pimps. He has a thoughtful side. He’s a sensitive pimp. One that makes a song for his mom (“Moma”). One that worries about some “Petty Crime” he apparently committed at the age of nine. One that wishes he’d never got past the age of eight, as he confesses in “Hippity Hop”, where he reminisces about the innocence of a mind that found delight in nursery rhymes. I just don’t know why he now has to be a +pimp+ spitting nursery rhymes. Alas, wanting to be a pimp after all, PIMP-T also has to cater to the ladies. He does so in “Tha Pimp-T Theme” (“While you be leavin’ the ladies yawnin’ / I goes on and on and on and on and on and”) and “Bump-n-Grind Fiend”. Being the friendly type of pimp the he is, he steers clear of sexually explicit language and derogatory or demeaning terms. Some kind of pimp.

But beware, PIMP-T can also be “Pissed Off” (his bad mood song). This guy is really the complete package: He has treats for the party people (“Party Slam”, “Get Yo Groove On”), he lets other dudes rap on his CD (“Number One”, “No Production Budget”, “Funky Punks Anthem”) – there’s even a spoken word finale where he puts it all into perspective:

“With this album I do present
the gifts that God to me hath lent
Random is not the order of these songs
rather they follow in chronological order like psalms
And like a psalm each song contains a theme
listen intently to the words and you know what I mean
Many people have been plagued by striving for the norm
when in fact there exists no such form
Standards exist only at the personal level
difficult to grasp like a clasp upon the devil
The individuality found within this album makes it quite different
built from the many hands of those I consider gifted
On stage I might act a little wild
but I’m not claiming to be able to freestyle
I’m not asking anyone to move over
nor am I claiming to be a microphone controller
You might not like what I say, but I shall forever be a poet
And rap be the blessed way that I chooseth to expose it”

That’s deep, man. Suddenly it all makes sense. This is really a +concept album+, just like PIMP-T is a +concept+. It’s about originality and individuality, not about putting on a show to make your buddies crack up. And done with such ease, with such grace.

After all is said and done, considering that the character of PIMP-T isn’t some ignorant shit talker (more like an ignorant sweet talker), I can’t help but think of another guy whose work I reviewed for this website earlier this year. His name was MC Potbelly, and he was a rapping pimp too. He seemed much more serious about it, but maybe that was also what made him funnier than PIMP-T. Ultimately, it’s hard to tell how far you +can+ take and how far you +have to+ take a joke. When does it start to get funny? When does it start to look like you’re not joking anymore? Maybe we should ask Mike Myers. He’s Canadian too, you know? Yeah baby, yeah!