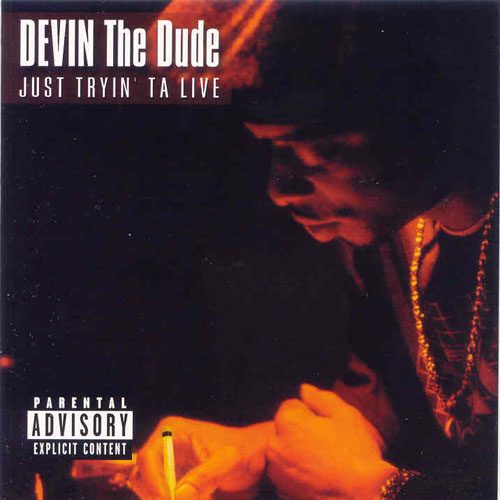 “I go out to the clubs, I try to fit in
The bouncers at the door thinkin I got ta lie to get in
‘You Devin, who Devin?’ Man you know I be rhymin
‘You ain’t no motherfuckin rapper, where’s your gold ‘n your diamonds?'”

If you drew a circle around the elite rappers of Houston, Devin the Dude would be standing right in the middle. Unfortunately for Devin, the words shown above from “Go Somewhere” reflect the kind of recognition he has nationally. People may remember him from guest appearances on songs with Dr. Dre, Scarface and Too $hort, but it seems only hardcore Southern rap fans came up on his self-titled debut album.

Take Devin’s nickname for example. Although “dude” is a word that historically meant a city slicker who was a square in the wild West, most people today associate it with laid back California surfers who smoke fat bongs in teen movies. “Dude” therefore not only became a ubiquitous word for a friend, but implied a sort of laid back and surreal coolness at odds with life’s rushed pace. It’s ironic that this word would come 180 degrees from it’s original meaning but it’s appropriate that as a Southerner, Devin the Dude would recapture a former cowboy-ism and embody it’s new meaning. It’s not so unique for Southern rappers to take things at a more relaxed pace, but this “Dude” takes it to the next level. A self-professed “square roller” whose idea of “R & B” stands for “reefer and beer,” Devin wants to share his high on life with the world. The issues in his life are not nearly as blood-soaked and violent as some of his contemporaries; rather he interchangably sings and raps about troubles like being broke when you want to get high. “Doobie Ashtray” sums this up nicely:

“You probably don’t have a big ol’ house on the hill..
.. but if you did, just imagine how it’d feel
if your phone got disconnected, no cash, yo’ gas cut off
And the gal that you had that was helpin just stepped the fuck off
She took the kid, the dog and the kitty
And everybody know you’re at a low, they feel pity
And what’s really fucked up is now, you’re just normal
No mo’ hoes, no mo’ clothes, can’t go to the show cause it’s formal
And you wonder.. why why why why why, and you resort to gettin high
But damn, you can’t find your stash
And you never took the time to ask yourself..     {*Devin starts singing*}
Whatchu gonna do when the people go home
And you wanna smoke weed, but the reefer’s all gone and
Somebody had the nerve to take the herb out of the doobie ashtray
Why’d they do me that way?”

Those who don’t know about his Southern background might be suprised that this Southern-fried guitar funk is by none other than DJ Premier. There’s plenty of talent to go around behind the boards though: T-Mix does a very Dr. Dre style beat on “Some of ‘Em” featuring Nas and Xzibit, Dre himself laces sinister pianoes of “It’s a Shame” co-starring Pooh Bear, Domo and Blind Rob get mad props throughout, and Rap-A-Lot alumnus Mike Dean does songs like the title track and the aforementioned “R & B.” The latter track is straight comedy, as a fictional conversation between Devin and a redneck turns into one-upsmanship about who has the best buds which finds The Dude trying to teach his erstwhile friend how to rap:

“I feel the need for beer and weed
Why don’t you smoke some heah with me? (Fire it up)
And we can ride through the ghettoes and trailer parks
And we can drank and spark until it gets dark..”

Unfortunately for the redneck, he gets kicked to the curb by Devin because he can’t learn how to pronounce the word “nigga.” Dudes of all stripes though will want to kick back and enjoy Devin’s stylings. Whether he’s pushing a hooptie on “Lacville ’79,” being laughed at by his peers on the song “I-Hi,” or cleverly mixing snippets of Ice-T’s “words you are offended by” on the song “Whatever,” Devin’s self-effacing raps and smooth beats result in a sonic experience relatively free of musical miscues. Only the Raphael Saddiq produced and guest-starred “Just a Man” seems out of place on this album; a little too urban contemporary even for a rapper who likes to sing his own hooks (and sing them well to boot). Given Rap-A-Lot’s mediocre promotions budget despite their self-proclaimed “Resurrection” as a record label, Devin’s latest album “Just Tryin’ Ta Live” may suffer the same fate as his last: tons of regional respect, a few hardcore fans nationally, and sales that knock wood overall. If you want a Southern rap album that’s slow without being “slowed” and not overly obsessed with being flossy and materialistic, Devin proves he’s an average Dude with a flow that’s anything but.