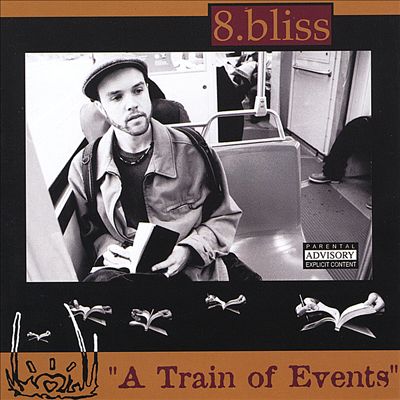 Let’s scroll down a couple of years to a time when scientists will finally be able to present a device that turns virtual reality into a complete, sensual and emotional experience. Hollywood, game developers, generals, teachers, and last but not least the porno industry will all happily apply the new technology to their field. Some software developers might even try to attend to deeper reaching emotional, intellectual, if not spiritual needs. We’re not quite there yet. So far, it’s still our ears and eyes that process the information contained on these handy silver discs. And maybe that’s a good thing. Because once every detail is taken care of, what’s left to the imagination?

So while some of us choose to follow the adventures of action heroes 50 Cent and Eminem, others might prefer listening to a vocalist who is more the philosopher type. On the front cover of his debut album “A Train of Events”, rapper/spoken word artist 8.bliss can be seen riding the subway, looking up from a bulky notebook, observing something off-screen. On the back cover he puts the following request: ‘Please, at least once, lie on your back, headphones on, and listen to this recording in it’s entirety.’

Do as you’re instructed and get taken on a mind journey through the streets of San Francisco and beyond, to a place where real-life action transcends into thoughts and images. There’s too much happening – or rather, too much thoughts are being shared on this record to give a full account. More impressive anyway is the attention that is given to musical detail. The parade of surprising features jumps off with what first sounds like a fog horn announcing the opening “Inbound”, which, as the track progresses, more and more resembles a buddhist chant. Track number two, “Poetic Shorts”, is an excursion on soulful sampling that would make Just Blaze proud. The DJ Denizen-produced “Sub Lounge Love”, one of the strongest selections, undergoes constant changes as layers of trip-hop and drum-n-bass shift according to the highs and lows in the relationship that is being described. “Eye to Eye”, an essay on the importance of communication, features suspenseful piano drops that provide an excellent background for the cautionary tale being spun. When it comes to creating different moods for different topics, main producer DJ Exacto and 8.bliss have enough expertise to create a musically sound longplayer.

One thing that “A Train of Events” certainly lacks compared to contemporary hip-hop is the punch. If you’re looking for a ‘sexy’ sound, this is not the place to find it. Nevertheless, the musical diversity on this album is highly impressive, from classical strings to beatboxing, from the low-fi approach of “Unscripted Strategy” to the brainwave vibe of “Face to Face”, there’s room for almost everything, and it’s all expertedly arranged, even when things get a little more experimental.

Lyrically, 8.bliss likes to go into great detail as well. What he serves is no lyrical fast food and needs to be chewed a little longer than the usual chart fodder. True to his own words – “thought keeps the soul alive and friction keeps the soul awake” – 8.bliss confronts the listener with nothing less than existential matters. Without having to be abstract, 8.bliss proves that he is a truly free thinker that is able to turn his introspection outwards, an attitude he encapsules in the truncated triangle of “free style, mind open, words spoken.” This is someone who is well aware of the power of words (“hate is one of the harshest words in the English language, I hate it when I say it,” he declares) and for whom communication is absolutely essential: “I want to share myself with another one, I’m tired of being selfish.” Probably the best (and most complete) showcase of this interplay between his inner mind and the world outside is “Face to Face”, in which he is able to give moral support to a homeless man and receives the same thing in return.

The catch to this is that while “A Train of Events” may be rich in information, it desperately needs trimming. 8.bliss likes to lay out his thoughts at great length, to the point where he is nearly overanalyzing things. The following excerpt is really a misrepresentation of the album’s lyrical content, but it shows how hopelessly long-winded 8.bliss can be. The way this album is being introduced, you know it’s gonna be a long ride:

8.bliss is not out to provoke people the way a Saul Williams does, he’s less eccentric and less expressive. He’s also less sublime, but what he lacks in subtleness, he makes up for with a refreshing honesty. Which occasionally brushes his whole act with a slightly naive touch. Then again, this may exactly be what makes this artist so special.

As “Hip Hop Therapy” is one of the very few tracks that just don’t work at all, we have to mention his delivery. Sounding comfortable when he’s either just talking or rapping, he sends confusing signals when he tries to do both at the same time. Thankfully, he redeems himself from the narrow spectre of his voice and his shaky sense of rhythm with a great care for vocal arrangement.

“A Train of Events” certainly isn’t for anybody. But customers longing for musical soul food might as well stop by and order themselves this big portion of carefully arranged nutritious elements.