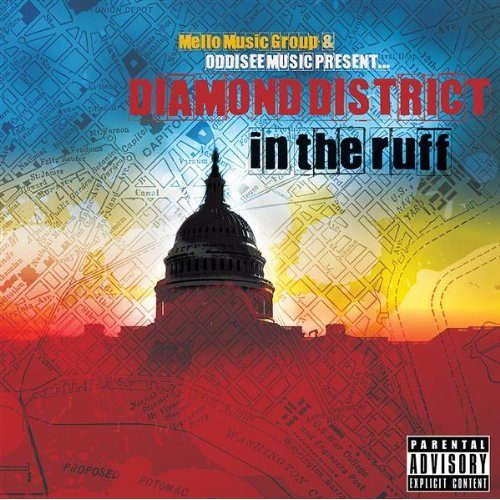 Diamond District :: In the Ruff

Sometimes the best things in life are free. Case in point, Diamond District’s debut album, which is available for the nada on their website. Usually with things that are free, there is a catch: the couch you get on the street has a funny smell you can’t get rid of, the free contest you enter gives millions of spammers and junk mail companies your contact info, the free lunch you go to ends with you buying a time share in Mexico that you’ll never use. With “In the Ruff,” there is no catch. This is just twelve tracks of quality hip hop.

Diamond District is DC crew made up of rapper/producer Oddisee, and rappers XO and YU. I’m not familiar with the rappers, but Oddisee has done beats for Freeway, Talib Kweli, and Little Brother, among others. In other words, he’s no newbie or amateur. This album is the group’s answer to the question, “where did the grimy East Coast sound go?” It’s full of hard-hitting beats and rhymes that sound like they came out of NYC circa 1995. In fact, the first time I heard this, I thought it was a classic East Coast album that I had slept on.

They come out the gates strong with “Streets Won’t Let Me Chill,” rapping:

“If my lining is silver and my flow’s cold enough
then my tongue stick to it like a window with frost
Then I woke up
Doped up on life
See, hustlin’s the motive of life like the mode of the song, right?
Develop the mic voice
Cuz if it don’t work
I gotta go to work and get a job with my white boys
And that ain’t the right choice”

“Who I Be” uses an Ol’ Dirty Bastard sample for the hook, further demonstrating the link to classic East Coast hip hop. “Back to Basics” has a thumping beat over spacey pianos and strings, and “I Mean Business” loops a drum fill over a languid, menacing synthesizer. “Let Me Explain” has a similar trippy beat, soulful and headnodding. “Off The Late Night” works a soul loop while the boys offer languid raps about chasing women, and “First Time” is a chilled out love song. The beat sounds a little Midwest and West Coast, specifically Dilla and Oxnard Beat Konducta Madlib. Like those two beatmakers, Oddisee knows his way around an obscure sample, and constructs his beats with subtlety and artistry.

The boys do the production proud, dropping intricate rhymes with fire. All three rappers hold their own on the mic, spitting hardcore hip hop that is a worthy homage to the NY sound they are paying tribute to. Since I’m not familiar with any of the rappers individually, I had trouble distinguishing between them on the tracks, but all three hold their own. Even more impressive, there’s not any profanity on the album, and you don’t miss it. Their rhymes hit hard without the f bombs, and the restriction on their language forces them to innovate and not fall back on the same curse words to prove a point.

“In the Ruff” may be free, but it’s anything but worthless. This is twelve tracks of banging East Coast hip hop. The free album marketing method may end up working for them; I’m already looking out for anything else that XO and YU are on, and I’m checking out Oddisee’s production work. Anyone with an internet connection and love of the 90s NY sound owes it to themselves to download this now.