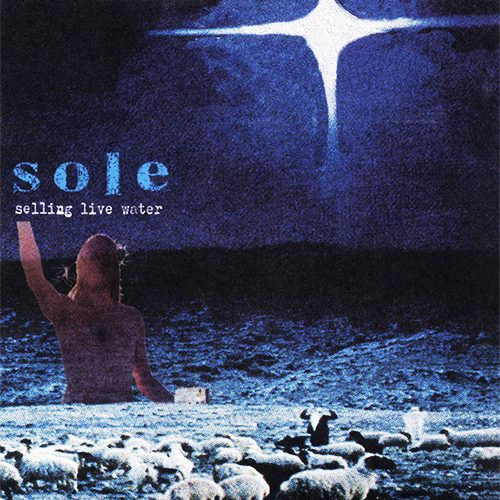 With legions of rookie rappers trying to master the art of rapping every single day, it’s hard to imagine someone establishing a rap career without relying on the genre’s built-in special skills arsenal comprised of spectacular flows, innovative use of slang, rhyming prowess, a commanding voice, etc. but based on emotion-driven poetics instead. Yet Sole and his Anticon cohorts have done just that. Then again, they’ve come a long way, despite their quick rise to prominence. Just press play on Sole’s second LP, “Selling Live Water” to catch a glimpse of where this guy is coming from:

“The white man’s a fuckin’ devil
I wanted to be black at age 14
so when they say I don’t respect the culture…
truth is, I only rap cause I ain’t smart enough to write a book”

Welcome to Sole’s world, where live water is a metaphor for humans, where self-doubt brings forth inner strength and where text fragments, despite looking like taken out of context, should +not+ be taken out of context. His debut’s clear message to inquiring minds – “and if you don’t understand it, I can’t explain it” – still echoing, “Selling Live Water” is a brand new collection of stream-of-consciousness excursions along the outer regions of rap music. To argue that to understand Sole, you’d have to understand hip-hop, would be a bold statement. But knowing where someone’s coming from sure helps you understand where he’s going. The album-opening “Da Baddest Poet” is where Sole reaches deep into his past, digging up a line he recorded way back in 1993 to reflect his younger, possibly gangsta rap-influenced days. It’s easy to imagine that the youngster that proclaimed, “cops ain’t shit to me,” also thought he was “da baddest poet” to ever grip a mic. Ten years later however, that title seems much more appropriate, as Sole has gone from a white boy imitating black MC’s to a twenty-something forging a new genre:

“Always wanted to be a rapper
but when I finally made it there, no one wanted me
Since no one wants me here
in the immortal words of Ice-T: shoulda killed me last year
But in the mere mortal words of me:
I’ve torn up some rebuttals and lost more friends but like the old saying goes
If you can’t nuke ’em, starve ’em or drop food on ’em
I’m half a brothel, half a novel, half a one man army
MC’s don’t want beef
they wanna shake my hand, then make a diss song about me”

Yes, Sole +does+ rap, just as there are multiple references to rap music throughout this album. But familiarity is not something that “Selling Live Water” offers, neither is it what Anticon aims for. Sometime back in his dues-paying past, Sole did flow, and did rhyme, but as time went on and mainstream rap music became even more repetitive, Sole must have realized that the true free spirit can’t be shackled no matter what. So when you meet him now, Sole is not a technically brilliant rapper, as he simply doesn’t care about his status as a ‘rappper’ anymore. On “Selling Live Water”, hip-hop is merely one of many references, its ghost of times past lingering over some of the songs, decorating the album with a few stripes and honor medals, so that we still may recognize the MC in the making of yesterday hiding behind the abstract poet of today.

From a literary standpoint, “Selling Live Water” probably isn’t groundbreaking. There’s pictorial quality in his writing, there’s some off-road rhetoric, wordplay, word association, etc. But treated like any other text, the album’s booklet definitely makes for a good read. In that respect, it is almost more rewarding than the record itself, because when we start talking about what’s actually going on on “Selling Live Water”, we can’t help but mention Sole’s hyperactive behavior. In a departure from the clear vocals of “Bottle of Humans”, on “Selling Live Water” Sole tends to dart frantically ahead, often leaving the beats stumbling after him. Add the strange habit of swallowing certain consonants and a voice that seems to suffer from a permanent slight cold, and you have a rapper that is rather hard to follow once he exceeds a certain speed.

Yet these same factors that prevent us from completely grasping Sole are what make his act seem so honest. Representing the restless and conquering the complacent, Sole conjures up a brainstorm and simply lets it rain. Studying self and examining his environment with an unsentimental focus on details, Sole scrapes up the few emotions left in a conformist society, balls everything up and throws it angrily at the world. And if his lyrics express despair and loneliness, then that’s what you will hear in his voice.

The beats are mostly in tune with these sentiments. The album is off to a good start with the solemn funeral march of “Da Baddest Poet” which gets blown up into a cascade of beats towards the end, augmenting the noise level together with the shouting Sole. “Shoot the Messenger” introduces itself with a set of barebone percussion that gets covered in spheric sound layers. The otherwise impressive “Salt on Everything” ominously looming over the rapper is jeopardized by some rather dull drum programming. Elsewhere, the drums are the breath of life blowing over soundscapes that are firmly grounded on the dark side. The best example being the Alias-produced “Tokyo”, whose (sampled) heavy heaving is more akin to the reaper’s breath, yet the drums are responsible for keeping this one among the living. Unfortunatley, Sole ruins the track with his frantic performance.

Tracks like “Plutonium” and “Sebago” on the other hand are standard sublevel-hip-hop fare. “Slow, Cold Drops” is overpowered by Sole’s performance, while “Pawn in the Game Pt. 1” develops a life of its own, with a melodic loop propelling it forward. “The Priziest Horse” keeps its head above water thanks to some very nice horn stabs, before Alias gets sentimental with the lounge music-like “Plastic Teepee on a Highway Blues”. The finale comes courtesy of Odd Nosdam, who builds the title track with a multitude of melancholic but harmonically grooving loops.

In hip-hop, there’s usually an element of routine holding everything together. The music follows various formulas, the most dominant being the fact that a certain quota of rhymes has to be met. By freeing himself from the rhyme structure, Sole and others of his ilk automatically alienate themselves from traditional hip-hop. Already rapping outside of the box, Sole takes an even bigger step away from it with “Selling Live Water”. While “Bottle of Humans” was a landmark release that is yet to be recognized by hip-hop historians, “Selling Live Water” is the logical progression for someone who always wants to be one step ahead. So be warned, compared to its considerably longer predecessor, “Selling Live Water” makes for a much more challenging listen. But then again, you can’t really be afraid of anything when you approach an Anticon record.