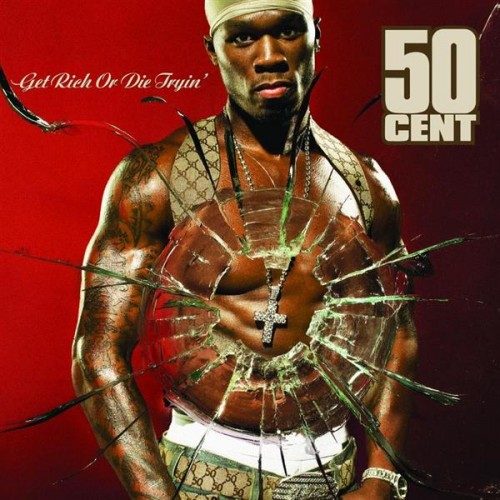 Even the 10-10-220 commercials say it – what can you get for just a dollar? Now split that. Come up the hard way like Curtis Jackson did; trying to make a dollar out of fifty cents. He hustled in Queens to survive, yet ironically his burgeoning fame as a rap artist may have overexposed his dirt on the street and almost cost him his life in May of 2000 when he was shot nine times. It’s hard to say whether this hurt as much though as being dropped from a major label deal by Columbia Records, right as his “Power of the Dollar” debut was about to hit stores. Either way, in his 26 years on this planet, the aspiring rapper has had more ups and downs than your favorite Coney Island ride. No one would have blamed him for cashing in his two bits, and getting out of the rap game permanently.

They say what doesn’t kill you makes you stronger though, and for 50 Cent that’s literally true. After making the rounds of New York’s mix tape circuit and garnering enough money and credibility to independently release an LP entitled (appropriately enough) “Guess Who’s Back,” Jackson was approached by numerous record labels and rap factions eager to ink the unsigned rapper to a deal. In what might seem like poetic justice to some after once being shunned by Columbia, 50 flipped them all the bird and inked a deal with Eminem’s imprint Shady Records. Having been put on by Dr. Dre after years of struggling in the underground, one could even say the oft-criticized white rapper had repaid the debt in kind. To date the relationship has been a good one – raising 50’s profile in the mainstream and getting his song “Wanksta” from the 8 Mile movie soundtrack into heavy rotation coast to coast.

50 has not been resting on these laurels. In fact, to feed an ever larger and hungrier audience he’s been releasing a slew of underground albums that feature him and his G-Unit click; albums with titles like “No Mercy, No Fear” and “50 Cent is the Future.” Amazingly enough he was recording a debut album for Shady Records at the same time, the aptly titled “Get Rich or Die Tryin’.” Truly blessed with a work ethic second to none, 50’s prodigious output may even exceed Nasir Jones and Shawn Carter for most rap songs in a 12 month span. And there’s no doubt the two of them are on his mind on “High All the Time”:

“There’s no competition, it’s just me
50 Cent motherfucker I’m hot on these streets
If David could go against Goliath with a stone
I could go at Nas and Jigga, both for the throne”

Where his previous independent releases had been filled with his wit and style but occasionally lacked in beats, this mistake has been rectified by his linking with Shady Records – which naturally results in his being tied into Aftermath as well. Dr. Dre’s big thumbprint can be seen all over this release, from his production on 50’s current single and party anthem “In Da Club” to his “clak clak gun-clap” beat on “Heat” and the pounding piano chords of “If I Can’t” among others. The latter showcases his determination to make it by any means, and even includes a lil’ tribute to the old school:

“Now Peter Piper picked peppers, and Run rocked rhymes
That 50 Cent’ll write a little bit, but I pop nines
I tell niggaz get they money right, cause I got mine
When I’m around quit playin nigga, you can’t shine
You gon’ be that next chump, to end up in the trunk
After bein hit by the pump – is that what you want?
Be EASSSSSY nigga, I lay your ass out
Be-LIEEEVE me nigga, that’s what I’m about”

The rapper even shows a penchant for occasionally busting his hooks and lines in a sung delivery, not unlike his label CEO. And just like him, 50 would never win a Grammy for best solo male vocalist, but he doesn’t hurt the ears like Guru did on “Brainstorm” or Biz Markie does on.. well, anything. So when 50 croons “I don’t know what you heard about me, but a bitch can’t get a dollar out of me […] I’m a motherfucking P.I.M.P.” on Denaun Porter’s track of the same name, you won’t hate. No love is lost at hearing him open the Eminem produced “Patiently Waiting” either:

“I’ve been patiently waiting for a track to explode on
You can stunt if you want and yo’ ass’ll get rolled on
It feels like my flow’s been hot for so long
If you thinkin I’ma fuckin fall off, you so wrong”

Eminem wasn’t content to just do the track though – he had to jump on the beat with his newest recruit croon a little himself. The sounds of a breathing tube and heart monitor sync perfectly with his track at his introduction, punctuating his delivery as well as his words and showing that he keeps getting better at all three:

“You’ve been patiently waiting to make it through all the hatin
Debatin whether or not you can even weather the storm
As you lay on the table they operatin to save you
It’s like an angel came to you sent from the heavens above.. {*flatline*}”

The best treat is yet to come though, hearing 50’s pleasantly musical flow on “21 Questions” be accompanied by none other than the king of rap hooks himself – Nate D-O-Double-G. Don’t think that 50 forgot to rap though, or that his own prowess on the streets and trash talking are his only subjects. This song slyly asks what many men would like the answer to – girl, will you stay down with me no matter what? He searches long and hard to find the truth:

“If I got locked up and sentenced to a quarter century
could I count on you to be there to support me mentally?
If I went back to a hooptie from a Benz;
would you poof, and disappear, like some of my friends?
If I was hit and I was hurt would you be by my side?
If it was time to put in work would you be down to ride?
I get out and peel a nigga cap, then chill and drive
I’m askin questions to find out how you feel inside
If I ain’t rap cause I flipped burgers at Burger King
Would you be ashamed to tell your friends you feelin me?”

Even thugs need love, and 50 isn’t ashamed to tell you how he feels no matter what the topic is. For those who have missed out on why 50 is so popular now, his stark honesty in lines like “Some say I’m paranoid I say I’m careful how I choose my friends; I’ve been to ICU once I ain’t goin again” from “Gotta Make it to Heaven” play a part. It’s also his sense of fun, a certain reckless abandon that may only come from having already brushed so closely with death; the attitude you can hear on songs like the bonus track “Life’s on the Line”:

“These cats always escape reality when they rhyme
That’s why they write about bricks and only dealt wit dimes
Leave it to them, and they say they got a fast car
NASCAR, truck wit a crash bar
And TV’s in the dash, pa
See ’em in the five wit stock rims – I just laugh, pa
I catch stunts when I ain’t tryin, I ain’t lyin
I sip Dom P ’til I split up, keep my wrists lit up
Get outta line, I get you hit up (wooooo!)
Now if you say my name in your rhyme, you better watch what you say”

Whether produced by the well known names of Eminem and Dr. Dre’s clique, or lesser knowns like Rob Tewlow and SixFigga on “What Up Gangsta” and “Many Men (Wish Death)” respectively, the album is very solid musically. Onle a few tracks really lack. “Blood Hound” has an electronic beat that makes progressive steps down in the background behind bars that’s really boring over several minutes – duhhhh, duhhhh, duhhhh, duhhhh – over and over. Rockwilder’s “Like My Style” seems to be trying a little too hard to be jiggy, and is not typical of the banging beats he makes for Redman. Eminem’s “Don’t Push Me” is decent; just not exceptional. It’s hard to complain when these are spread out over 19 tracks, with only the “Intro” not qualifying as an actual song. If you already knew 50 Cent from back in the days when his comical “How to Rob” made a sensation in the rap world, or heard any of his underground albums in 2002, the best of what he did before has been distilled and purified into a thorough CD. For those who don’t already know him but have heard “Wanksta” or “In Da Club” this album will undoubtedly be more than they expected, but also a window into the eyes of a man whom even 9 shots couldn’t hold down for long. 50 Cent IS the future.