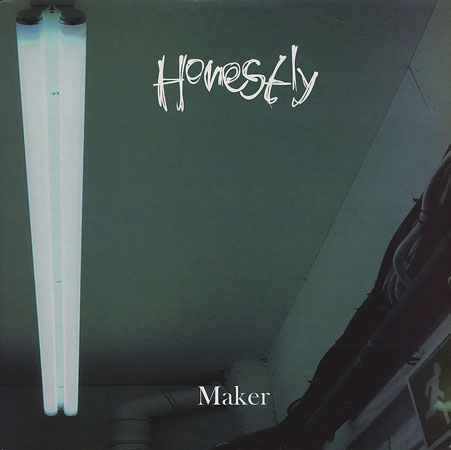 Hovi shoulda added ‘classify the unclassifiable,’ because these are my first impressions of Maker’s “Honestly.” More oft that than not, music that does not fit in a specific category usually IS wack. Nondescript music to me tries too hard to be “different” for the sake, and is seen as a lame attempt to stand out from other forms of mediocre music. These are NOT my sentiments of “Honestly,” because quite honestly, the shit is bangin’! Not in a Pharoahe Monch/M.O.P “No Mercy” manner, but in more of an Avalanches’ “Since I Left You” kinda way. This is by no means an attempt to pigeon-hole Maker’s music, but listening to this LP repeatedly reminds me of the sentiments I harboured in 2001 when I first heard the Avalanches. Throughout the listening period, you are aware that nothing you’ve heard before sounds like this, and as a result the music leaves an indelible imprint. I really like this album, and it ain’t just because I’m greeted by a beautiful-sounding woman in the sample-infused introduction, appropriately entitled “Hello.” (I got the impression that a vast amount of passion goes into Maker’s music, as some of it spilt over and flooded into my eardrums.) Her lush singing voice entrances you into immediately wanting more of the same.

“Jumping Lilly” is an ode to driving across country in a Honda Civic, and all I can say is that I’m feelin’ Adeem to the fullest. A rampaging drum beat opens up the gritty, urban sounds of “Ten,” and the script flips as the bass runs up-and-down the song, while some horns sing mournfully in the background. The extra fierce bass-playing is reminiscent of a young Ron Carter. What follows that miniature masterpiece is the title track, featuring Qwel, who spits indecipherable sarcasm:

“Pardon me y’all but I will be vomiting over yonder
by the brand new sauna, in your SUV limo
If you squint real hard and take the angle in account
It ain’t you we shoutin bout it’s just tintin on the window…”

The mcenroe-esque “Tomorrow By The Ocean” leads into “Abandon all Cargo.” Lord 360, of Slaughterhouse V, fame lets his oratory flow cut cavernous creases all over the grimy, metallic beat. Hear him and appreciate the flowing wordplay:

“Seems I started as a small forest then in fact just
Learned about your culture through Egyptian hieroglyphs
This recital IS, simply a tangent
From-the-man-that, just can’t sit still
And I probably never will, cause I’m filled
with the brim with the whims of them
pen-holdin deities incapable of sin
Too bad I’m not coz I rot in decaying corpses
That just dwarfs-es, potential I been born with
I’m a forlorn dick that just whips around this place
And I just rip Sun out of space
’til I get pissed and pound ya face in
I kick the bass in, wastin my minutes
And facin discriminate women livin illegitimate
Fittin in isn’t in the air anywhere I go, but, anywhere my flow
Shows foes, those mopes grow close, so quote this prose
Hold focus, words mold locusts out of the smokeless opus…”

Roughly one third of this LP’s tracks are blessed with rhymes and immaculate vocals of sorts. The rest of the cuts are sonic pleasures such as “54 Bucks Per Minute” and “Reflection.” Intricately woven samples and live instrumentals permeate these tracks, and are the result of the painstaking creation of the Maker. The overtly jazzy “Nacrology” features the Nacrobats. On this lullaby, soulful Psalm One laces us with her thoughts:

The second half of “Honestly” opens with “Dead of Winter;” a lackadaisical bass-thumper with a piercing piano hiding in the corner. A despondent howl is also accompanied by a sax and strings; and these sounds allow this track to personify the frozen tundra of the Midwestern United States. Sarcasm, Governor Bolts and Josh Martinez offer their talent to “Uphill Climb,” and “How About This” leads us right back into these mental instrumentals; which is precisely what “Enter the Mind” embodies. Here we take notice of mid-nineties’ Primo-esque piano riffs that are sufficiently accompanied by jagged string-pulling from an Upright. The fifteenth track features a ‘soundin-like-a-young-ass-Rakim’ Thawfor, and he justly deserves the comparison.

“Drum’n’Bass” is the order in “Reflection,” while “Funk up the Place” sprinkles some ‘Galt MacDermot’ (read: funk) on the LP. Guest star Costume makes an appearance on “Intended For” and “Goodbye” fittingly and hilariously closes the sermon. All in all, it suffices to say that “Maker’s debut solo instrumental album” is an “undeniable listening experience.” This album is a sonic masterpiece… honestly.