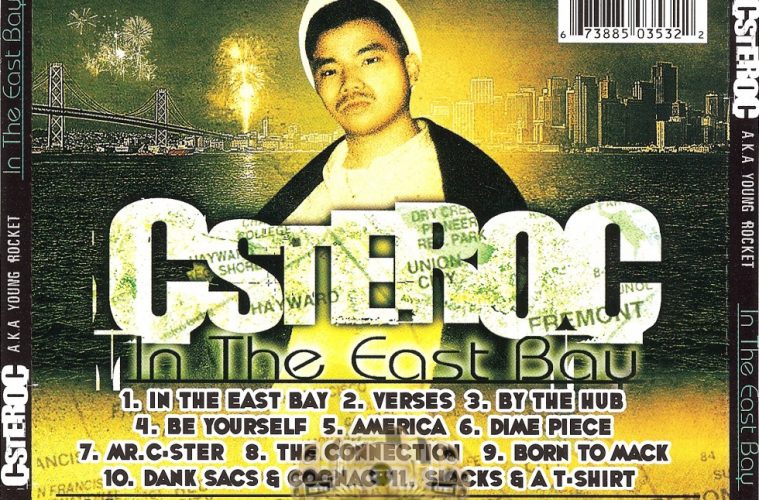 Csteroc :: In the East Bay

Back when I first got into rap from the San Francisco Bay Area, it didn’t seem that different. In the early ’90s I introduced myself to people like Paris, Too $hort, Digital Underground, N2Deep, the Hieroglypics, and adapted fairly quickly. But as time went on, the Bay began to produce a distinct style of rap music of which the infamous E-40 was only the tip of the iceberg. It took me many an intense listening session to get accustomed to the local slang, but that didn’t prevent me from soon standing knee-deep in records by 3XKrazy, Dangerous Dame, RBL Posse, Dru Down, Mac Dre, Mac Mall, etc. To this hip-hop fanatic raised in the ’80s, hearing mob music (as it came to be known), felt like being reborn, similarly to when I discovered old school hip-hop or when the Southern wave swept over us. It was hip-hop, it messed with your mind, it bullied your body, it soothed your soul, and it was fresh as f**k.

Since then, Oakland, San Francisco and neighboring communities have put out more rap records than the New York metro ever will, and they’re not about to stop. There’s a steady influx of new blood, keeping the scene alive and thriving. One such young gun is Fremont’s Csteroc (spelled ‘Cee-steroc’). With several tapes (like “Young Viet Vet”) under his belt as well as a compilation he put together featuring various Asian rap artists from the Bay Area (“Young Csteroc presents Reality Raps”), Csteroc is now coming at us with his first solo CD. Gathering new tracks as well as remastered older ones, “In the East Bay” is a short but satisfactory introduction to the “young Vietnameze” and how he puts it down.

For anyone not familiar with someone like Dubee, be warned. Csteroc’s vocals tend to be a multi-layered heap of breathlessly rushed slang phrases delivered in a characteristical twang that some might consider comical. But others who are attuned to this particular Bay Area sound, will instantly recognize the specific style of spitting game. Should you come across Csteroc or a similar rapper and feel overwhelmed by the waterfall of words, don’t give up hope just yet, it takes time to develop an ear for this kind of rapping, and even then you won’t understand everything instantly. In a nutshell, Csteroc presents himself as the typical young hustler “about his spinach”, still “puzzled, if I bubble, what’s gonna happen / or hit bottom-rock dead broke.”

“East Bay ways I was raised, got me in the action,” he reflects on the title track, a type of action that already got him detecting “gray hairs on my dome.” Instead of flossin’ on some imagined baller status, Csteroc keeps a low profile, because that’s what you better do when you engage in criminal activity as described in “Slacks & a T-Shirt”:

“I does my dirt then skitty-skirt through the residence
Eddie Bauer murder ones leave no evidence
I represent the Oriental, tracin’ you down like a stencil
turn you into a number two pencil
I hit the fence like the Olympics
leave no trail with a faulty eye witness
I’m at the finish line, before the other side
just in time cause the money train just arrived
I got my partner AKA the getaway
we car-pullin’ cause there’s traffic on the way-way
Back to the ave or should I say thee block
my heart’s racin’ like I’m high off some rocks
Premeditated so they ain’t on the jock
Dedicated so you know I got it on lock
Celebratin’, gettin’ faded and it don’t stop
On the grind full-time, I gotta re-cop”

Certainly don’t expect a refined rhetoric from “In the East Bay”. Csteroc may rap in a reflective tone all the time, but often he just rehashes the same ol’ lyrical fast food you’d expect from a record rooted this deep in a genre. Take “Born to Mack”, which refers a classic phrase in its title but contains lyrics that seem to have no relation to it. “By the Hub” doesn’t live up to Too $hort standards either, but at least it evokes comparisons to “No Love From Oakland” through its pessimistic chorus “The city that I’m from really don’t got no love / I’m by the hub slangin’ dubs, what’s up?”

While there are a couple of songs that feel like random rappers spitting random verses during some smoked out midnight session (“Dank Sacs & Cognac”, “The Connection”) which drag the album seriously down, it also features some respectable efforts. On “Be Yourself” Csteroc and guests Kaynine, Highness and Ridah stress the importance of staying true to yourself. “Verses” catches your attention with the following introspective intro: “I sit alone in my room, choppin’ up this dank I’m finna blow / […] I take a look in the mirror and see the only person that give a fuck lookin’ back / I’m like, ‘What’s up, I got yo back’.”

On “America”, C-ster describes himself as a product of the environment, lamenting that “America made me a monster, it got me actin’ so sick, so sick.” The most detailed autobiographical song on “In the East Bay”, “America” shows a young kid being instilled with the desire to “go get that green” and choosing the illegal instead of the legal route: “The Silicon Valley, Northern Cali where the money be / Work full-time for the next man? I’ll do dirt on the streets / […] / show no remorse, show no feelings / climax of my life is packin’ a knife and petty drug-dealin’.”

What makes “In the East Bay” ultimately noteworthy is its production. Producers such as Payola and Csteroc himself come up with some classic Bay Area grooves (“Mr. C-ster”, “Be Yourself”, “Verses”), and even a bit of vintage 808 boom (“Dank Sacs & Cognac”). With a few exceptions, every track has a different profile and is expertedly produced. The problem lies mostly with the vocals, which can range from understandable (“Slacks & a T-Shirt”) to a complete mess (“Mr. C-ster”). When you squeeze three vocal drops into the same damn bar, you’re simply asking for confusion, whether the listener is familiar with your style or not. But those well-versed in the ways of mob music, remember we told you about Csteroc when you catch him mobbin’ thru the East Bay.