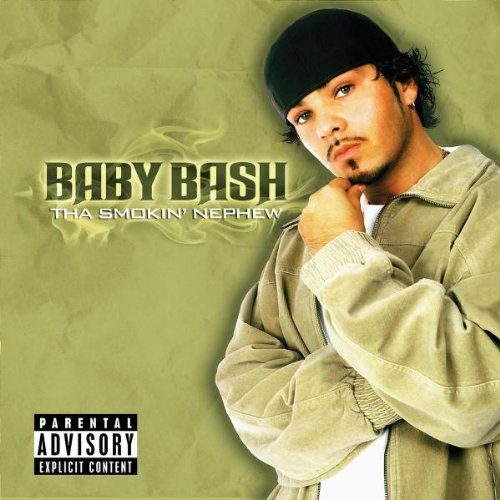 To clear up any confusion, the rapper on this album is also known as Baby Beesh. Since my reviewing partner-in-crime On Tha Cool” review, I’m going to opt not to break it all down again. If you’re not familiar with him, you can either read Matt’s piece or visit BabyBashMusic.com. Otherwise, take our word for it – spelled Bash or Beesh, Baby is a known factor in latino rap, from Cali to Texas.

This year, Bash came with a surprise for his fanbase and for the music world at large – a crossover hit. Many people are still trapped in the mental image of Cypress Hill being the lone latino rappers to score big crossover hits, even though from Frost to Mellow Man Ace to South Park Mexican, hispanic styles have always been on the cutting edge of contemporary rap. Still Bash had been something of an underground star like Dyablo and Lil’ Rob until the song “Suga Suga” came along. Southern beat impresario Happy Perez (who has produced for Master P and Mystikal among others) laced Bash’s entire album, but on this track he came with something EXTRA special. The softly strummed guitar, tinkling ivories, boom-tap-clap beat and Frankie J’s choral crooning all make this slow paced and cool song EN FUEGO on the charts. Bash’s rap is an unabashed ode to his favorite girl:

“You know it’s leather when we ride, woodgrain and rawhide
Doin what we do, watchin screens, gettin high
Girl you keep it so fly witcha sweet honeybuns
You was there when the money was gone
You’ll be there when the money comes
Off top I can’t lie – I love to get blowed
You’re my lil’ suga, I’m you’re lil’ chulo
And every time we kick it, it’s off to the groovy
Treat you like my sticky-icky or my sweet oohie-gooey (fa’real doe)”

While this song is so sweet it could give you a toothache, the speed with which it’s rising the charts is a testament to just how catchy and likeable the song is. You only need to hear it once and you’ll be hooked, catching yourself humming the melody at random and singing “suga suga how you get so flyyyy” all day and night. If ever a song sold an album, “Suga Suga” could push Bash’s album to the top on the strength alone. Fortunately Bash didn’t just phone in the rest of “Tha Smokin’ Nephew.” His smooth soft spoken style can’t disguise his skills on quickly spit tracks like “Shorty Doowop” and “Sexy Eyes,” both featuring Russell Lee. Perez proves himself to be a rising star in the rap world, producing harmonious tracks with a hispanic influence that don’t require cliches like mariachi horns or salsa swing to achieve their feel. By combining his clever grooves with Bash’s calm lyricism, the two create a sound that even No Limit couldn’t achieve with Snoop Dogg on their roster. And like Snoop, Bash may make ladies swoon, but he also portrays the “Image of Pimp” in his songs; and also shares a comedic streak with his contemporary. “Early in the Morning” is an ideal example:

“Ohh goodie goodie, got the mornin woodie
Roll over so quick, baby girl give it to me
Mayn, what a quickie, stabbin, with the stiffy
Bustin bigger nuts than Peter Pan AND Jiffy!
Give me a little lickie, huggie and kissy-kissy
And off last night, I’m STILL a little wiggy!
Forgive me girl if I damage-ya
But it feel like I’m on via-gra..”

It’s hard not to get caught up in Bash’s groove. Songs like “Feeling Me” and “Changed My Life” are the rule, not the exception – the rule being that Bash and Perez like to keep it fresh by not being too hardcore stylistically yet not becoming a PG rap icon of ire and satire like Will Smith (unfairly) is. The occasional track like “Yeh Suh!” and “Oh Wow” brings a harder edge to Bash’s music, the former with a bit of Screwed Up Click sound to it and the latter reminiscent of the Three 6 Mafia, both being only natural since they are Baby Bash’s contemporaries in the South. Still for Bash it’s only natural to groove at cruise control, and suck you into the soft sounds of songs like “Pollution” and the highly pimped out “Menage A Trois” in a MUY GRANDE way. By the time you’ve gotten to the album’s closers, including the bong piped out “Don’t Disrespect My Mind” and the funked up “Suga Suga Remix” featuring a reggae beat and dancehall artist Major Riley on the hook, you’ll be smokin with “Tha Nephew” too. Bash may be a long-time veteran of hip-hop and latin rap, but he represents the newest trends and emerging dopeness of regionally recognized hispanic hip-hop to the best and fullest. Easily one of 2003’s “must cop” albums, “Tha Smokin’ Nephew” will open many eyes and please just as many ears.