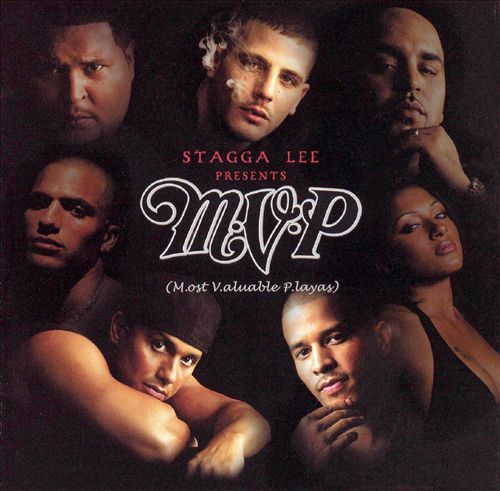 Stagga Lee fans have been waiting for his debut album “Game of Breath” to be released in stores for a while now. Keep waiting. In the meantime, all you “Roll Wit MVP” heads get the “Most Valuable Playas” album to tide you over. This is not strictly speaking a Stagga Lee album, even though he is the dominant MC on the record. Rather, this is a “Stagga Lee Presents” album. Who is he presenting? A crew of rappers, rudebwoys and singers that’s collectively produced by Robert Clivilles and Max Perez. If the former’s name rings a bell, you probably remember him as one half of the duo “C & C Music Factory.” It was Perez who brought Stagga lee to Clivilles, and Clivilles brought him into the fold of MVP. “Roll Wit MVP” was both his tribute to the duo and the smash hit song which rocked radio stations coast to coast this year, although most people think of it as the “la la la la” song.

Sadly, “Roll Wit MVP” is not included on this album, although Lee’s latest hit “Roc Ya Body (Mic Check 1, 2)” is in full effect. The Jamaican stylee of the song’s hook is provided by MVP’er Vice Verse, but the raps are all Stag’s. It’s essentially a party song, although Lee sprinkled a few gems into the mix:

“Now, this rhyme is for the masses
And schools that use Tupac poems to teach classes
Yo, try to follow when the turntable spinnin
The sound is leakin out on the crowd, gettin up in it
You see me coastin, the scene gettin frozen
He sound dope when the words are composin
D-Boys, break down, and flow like a slow jam
I be so damn ill ’til I’m an old man
STOP – ya makin it hot when y’all move
STAG – I bleach the top cause I choose
BRUISE – tracks like the cat, Lang’ Hughes
IN FACT – I’m nice with the rap, can’t lose”

That’s not to say Lee is spitting ill bars non-stop throughout. In fact, although Lee used to have a rep as a nasty battle MC, he’s more into party rhymes these days. It may seem like a somewhat odd role for a white rapper to fill, given the stereotypes that they’re either nasty like Eminem or verbose like El-Producto. Stagga Lee is not just another caucasian on the mic though – in fact some may not have even realized his race until reading this paragraph. Lee is conscious of the fact his strong vocal tones and New York accent make him marketable though, and he even jokes about it on the track “It’s About to Get Real in Here”:

“Kid, it’s almost like my hand wrapped too
Cause I spit ink deeper than my last tattoo
Turned blue when you found I was white, that’s cool
With the lights out, your wife might think I’m black too!”

With production by Clivilles and Perez throughout, there’s little question the music is going to be on point. The swinging latin heat of “Ride Wit Me (Hands Hi)” gives Lee and the MVP a chance to reference classic hip-hop quotes (“funky fresh, dressed to impress” and “something like a phenomenon” among others) yet take them in a hot new direction. Vice Verse sums up the track “Horny” well at the beginning with the words “Yes! Sex izza natural ting!” It’s not surprising that “The Go Go Song (Damn!)” sounds like some D.C. area horns and bounce, or that “It’s Gotta Be Hot!” heats things up with a track which sounds like a cross between The Neptunes and Kanye West. In this song, it’s MVP member J.R.X.L. who gets to shine first:

“Now what you want from me? I’m ready for y’all
Got the Cris’ for my miss and the Henny for y’all
Put the spliff to your lip, you ain’t ready to brawl
With a tall supermodel said she met me before
Like whatever – anything it take to get with it raw
We plush in the 6, so we crushin the 4″

There’s really nothing offensive here. MVP’s rappers are the average group of up-and-coming MC’s with decent-to-fair rhymes about chips and whips, with a little less than the average amount of rhymes about guns and clips. Lee is clearly the star of the group, but it’s just not his time yet to shine on his own. Still, until his full length album drops, this will do nicely. MVP drop an album full of strong beats, raps that are radio friendly without being overly corny or soft, and Vice Verse’s patois flows really punch up the feel of songs like “Bounce” and “DJ Pump it Up” – the latter being a “Boriqua Anthem” that’s a jazzed up remix of “Roc Ya Body.” The various elements come together to create a symphony of sound that’s strong, and while the “Most Valuable Playas” won’t win the World Series this year, they made the race for the wild card spot that much more interesting.