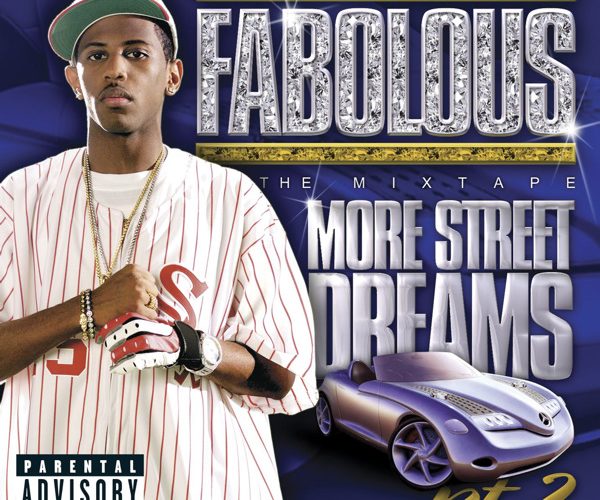 When you’re Fabolous, nothing is more fabulous than more Fabolous. For those Fabolous fans who felt that “Street Dreams” was a fabulous album, they’re getting a special treat – “More Street Dreams Pt. 2 – The Mixtape.” Mixtape may be a bit of a misnomer. Most mixtapes these days make music mixes with exclusive freestyles and remixes. Clearly though, Fabolous thinks it’s more fabulous to be the star of his Fabolous mixtape. Whether he or DJ Clue picked the songs, the intent here is clear – Fab gets more top billin’ than Audio Two.

That’s not to say that other artists don’t get some play, as long as they are willing to play the Fabolous way. One rapper who was obviously willing to play the game was Paul Cain, because you’ll repeatedly see his name listed on tracks. In fact, he appears on the first entry of the disc “Niggaz,” a song also featuring Joe Budden. Ironically when put in this form and labelled as a mixtape, this Fab/Clue/Duro produced track isn’t so great. It will remind you of the mediocre songs that make too many New York mixtapes drag on too long (with or without Drag-On). A simple piano loop and a shuffle drum track try to create a nostalgic sound that take you back, but it’s preposterous that they thought this track was in any way monstrous.

Things improve somewhat with the song “Now What,” a song with a pounding Clue & Duro beat that brings some heat. Even though Fab is still forcing his flow through a vocal monotone, on this song it works for him and he comes into his own. While to date some of his punchlines have been creatively challenged, here he finds a humerous balance that either implies he’s got a good ghostwriter or his skills simply got tighter:

“Nigga I’m in a aqua 5; with a button
that make the roof flip back like pocket knives
I can’t knock your drive; you feelin like Rocky
’til you get a beatin like he did in Rocky 5
That’s why I still hold toast; and get these bitches
to open they legs, wider than a field goal post
Broke niggaz don’t wanna stay in my grind so they knock it
Think my jeans got Mickey D’s signs on the pocket
The hydro combined with the chocolate; have your eyes
lookin like the tall dude who signed with the Rockets
The flow is so sick, sooner or later
these niggaz gonna need barf bags, bigger than golf bags”

While an unnecessary skit about rims slows things down, Fabolus comes back around with the first single “Now Ride.” Produced by DJ Scratchator, this song is also available for remixing later if you pop the CD in your PC and install the free PCDJ software that’s supplied. It’s an interesting gimmick true, but this isn’t a technology review, it’s a RapReview. Moving on to “Think Y’all Know,” Fab’s flow is acceptable enough but unfortuantely the Needlz beat is not up to snuff. In fact the dissonant noises will probably hurt your ears, so skip this here and the second needless skit that follows.

“Make U Mine” borrows from the Kelly Rowland (of Destiny’s Child fame) “Make You Wanna Stay” in some way, but truthfully I can’t say since I don’t remember the original. Fabolous is also borrowing from 50 Cent in his rhymes, and before you assume it’s criminal it’s quite possible that he meant this bit as a tribute:

“She say my man can barely move me
But boy you make me scream like a _Scary Movie_
On top of that, I’m smoother than the rest of the gangsters
And I proved that dude you mess with’s a +Wanksta+
Ohh! Daaaaaaaaaamn homey! (uh-huh)
Your girl is with the Street Faaaaam homey
And she ain’t fuckin witchu!”

In truth, it’s kinda cute. “Faboloso” is even better though, as it works with the R. Kelly and Fat Joe song “Who’s That” and makes it into something even fatter. This isn’t a deep song, but then what Fabolous song ever is? He handles his biz on the all too short cut, with the best line being “a shorty with an ass that bounce like hydraulics.” I think most men would want the girl with that butt.

Joe Budden comes back on track nine, but ironically Fabolous can’t say “this song is mine” because it’s actually a remix of Budden’s hit single “Fire.” The Just Blaze beat hasn’t changed, but it’s got new bars from Fabolous, taking the place of the original guest Busta Rhymes. While Fab isn’t quite the flower that Busta Bus is, he still handles his role fine. Joe Budden is stealing the show though with lines like “you pop lip like you got shit, that’s a minor congestion, you not sick.” Fab goes back to being solo on “I Usually Don’t,” but thanks to a mediocre Mr. Fingaz beat I won’t recommend it.

You should peep the “Renegade” remake that follows instead. I’m not sure Fabolous and Paul Cain are a good substitute for Jay-Z and Eminem (or Eminem and Royce Da 5’9″, as the case may actually be) but the beat still sounds hot. “F You Too” is a little more surprising, as it borrows from The LOX track “Fuck You” and manages to sound as good if not better than the original. On “B.K. Style” they borrow from Lil’ Kim’s “This is Who I Am,” and Fab brags that he’s “the rap LeBron James.” That might be premature, since Fabolous has actually been around for a while and James’ potential talent is still unsure and unproven. Regardless this song is groovin’, and leads right into the “Can’t Let You Go Remix” that was so popular in the underground. It’s the electronic Just Blaze style beat that he did for the “Excuse Me Miss (La La La)” remix for Jay-Z though, and as such doesn’t necessarily impress me much.

In total, while the amount of material here doesn’t make this “mixtape” long, the general quality of it is strong. Also, either because one eventually gets used to the way he raps or because he’s gotten better with the snaps, his monotone is progressively less annoying over time. I can’t say he authors the world’s greatest rhymes (and neither do I) but it would be a lie if I didn’t say that at times, it was impressive. “More Street Dreams Pt. 2” may be changing my mind about him somewhat, and it may do the same for you.