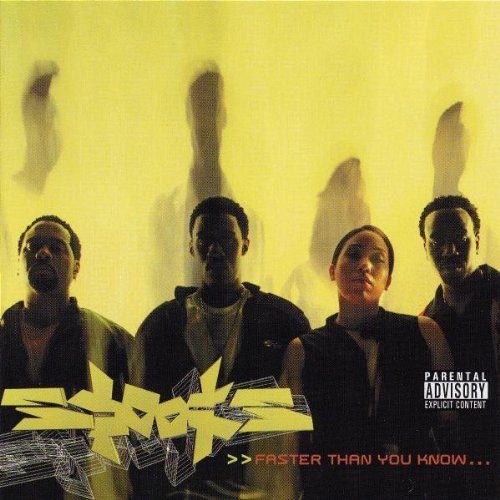 The Spooks :: Faster Than You Know

After a three year absence following the success of the “Things I’ve Seen” single and the complimentary reception of the subsequent album “S.I.O.S.O.S Vol.1”, The Spooks return with “Faster than You Know” to once again attempt to bridge the gap between Hip Hop’s two spheres â€“ the underground and mainstream.

If “S.I.O.S.O.S.” faltered at times because it tried to incorporate too many musical ambitions â€“ and a lot of the criticism about that album suggested it did â€“ then The Spooks have managed to sidestep this particular pitfall in making their new album more musically coherent, although this too has its drawbacks. Anyone who remembers the enchantment of “Things I’ve Seen” and â€“ to some extent â€“ the follow-up single “Karma Hotel” will be aware that a great deal of The Spooks’ strength lies in their ability to deliver melodic Hip Hop that sounds like pop rap on a superficial level, but which belies a deeper level of thought. That remains the case on this new album, so the title track and lead single “Faster than You Know” is a clear success with a beat that sounds like a polished J Dilla bump and Ming Xia’s typically affecting vocals. Jurassic 5’s Chali 2na makes an appearance to drop the track’s final verse and lend weight to the lyrics of Mr Book-T, Hypno and Joe Davis, as they collectively consider the improper messages sent out by a lot of chart-topping musical artists:

“Yo, these self-proclaimed kings of writing songs
Ain’t concerned with the distinction between right and wrong
Through love we face hate; it’s rarely a surprise
That the truth tastes great to a belly full of lies”

The message itself may not be a particularly revolutionary or insightful one, but The Spooks’ ability to craft it into a catchy and interesting track heightens its potential to garner broad attention, and therefore perhaps have a more positive effect. However, the assumption of pre-prescribed criticisms about the negative aspects of Hip Hop fail the Spooks crew on the skit track “A Hit”, as their vocals dance around the subject of negating intelligent and making a rump-shaking booty/guns/wealth track in order to gain commercial success. On this track, both the criticism they make, and the way in which they make it are simply too pedestrian to convey anything worthwhile, so “A Hit” comes off as a dismal parody at best. There’s also an element of irony in the fact that “Crazy” follows after “A Hit”, with a subject matter entirely concerned with the sex and the booty that “A Hit” just moments ago chastised.

“Faster than You Know” plays on, and for every track on which The Spooks formula of thought-provoking raps and catchy choruses works, there’s a less-successful track which uses the same formula in a less inspired way. So for every “Don’t Be Afraid” or “Change” which both embraces and supersedes the jazzy influence of The Spooks’ Philly-born members to produce a track that’s a satisfying union of Hip Hop and pop, there’s a “Part of the Game” or an “In on it” which is more a combination of grating sung vocals and ineffectual rap verses than anything else.

In fact, a strong contender for the album’s best track is the one which effectively breaks the mould: “Deadbeat” includes the haunting vocals and intelligent lyrics you’d expect â€“ this time considering the issue of deadbeat fathers â€“ but the beat is distinctly more drum and bass than Hip-Pop. “More To Learn” is a similar example of The Spooks expanding upon their established template for tracks, and its production, which features some great piano and Hammond organ, sets it far apart from the majority of the other tracks on the album.

If one defining criticism were to be levied at The Spooks and the music they produce, it would be that their continuing usage of what are effectively sixteen-bar raps and female-sung choruses is ultimately what leads to their undoing. Obviously, with three rap vocalists and one female singing member, this method of song construction is an obvious one for them to choose, but an album filled with such tracks will almost by definition be half-good and half-bad. Were The Spooks to tighten up the tracks they put out, discarding both the mediocre examples of the “Spooks template” and the tracks which seem only to rehash popular themes, their impact would be much greater. On “Broke”, the members of the crew consider the unattractive reality of living in poverty (either as an underground Hip Hop artist or in a broader sense), but address the topic with lyrics that really say nothing new at all:

“I’m broke: I don’t got no dough, no car, no ice, no spot to go
Yo, BROKE: I don’t have no wealth I can barely afford food to feed myself
Yo, BROKE: I can’t afford no rims; pack stacks of food stamps then roll out on timbs
I’m BROKE; y’all can relate, stop frontin
If you feel me don’t say ‘ho’ let me hold somethin”

The fact that this Intro/Chorus is immediately followed by a humorous and clever subversion of the lyrics from Clipse’ “When the Last Time” just proves that we should expect more from The Spooks lyricists than we sometimes get. Yes, “Faster than You Know” succeeds in retaining musical coherence but, conversely, it fails through its inclusion of tracks which may support the album’s themes, but which are below-par examples of The Spooks’ music-making ability. Ming Xia, Mr Booker-T, Hypno and Joe Davis are doing some good things, but they’re capable of so much more.

The Spooks :: Faster Than You Know
6Overall Score
Music6
Lyrics6