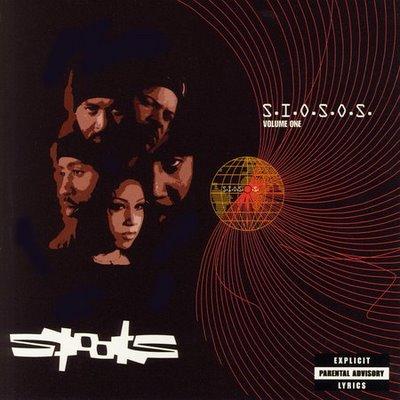 This album probably caught you off guard. Even if you recognize the name Spooks from their single “Things I’ve Seen” you probably weren’t expecting a full-length album from them this year. In fact, the Spooks themselves seem to be shocked it came together. Throughout the album are a series of skits about how a shady recording industry is trying to break them up or get Ming Xia (the singer who gave “Things I’ve Seen” it’s haunting refrain) to go solo a la Lauryn Hill.

First, to reassure the wary, the album’s title is not on some cryptic super-scientific mission – it’s actually quite simple: Spooks Is On Some Other Shit. Even Lawrence Fishburne (whose “Once in a Life” soundtrack they debuted on) seems to agree with that assessment. Before track two he’s asked “When you first heard the name of our group was the Spooks, what did you think?” and he replies, “They got a lot of balls! You know, either they crazy or they know what they’re doing.”

Listening to their album, you’ll come to the conclusion it’s a little bit of both. Members Mr Booka-T, Water Water, Hypno, J.D. and Ming-Xia are so large of a collective it’s hard to really key onto any individual member EXCEPT for Ming, whose haunting vocals recur throughout the album. As such it’s hard for this reviewer to say “Booka-T spit a sensational verse on track XXX” because there’s no way to identify which of those other four he is! That’s not to say that they aren’t spitting dope lyrics and dope flow; such as the opening verse of the aforementioned “Things I’ve Seen”:

“And I’ve tasted, the bitter tragedy of lives wasted
And men who glimpsed the darkness inside, but never faced it
And it’s a shame that most of y’all are followin sheep
Wallowin deep within the darkness, you’re fallin asleep”

Musically the album has it’s ups and downs. The near car horn-esque beat quality of “I Got U” (along with a corny refrain) are less than appetizing, while “Sweet Revenge” drifts along in a dusty, haunting flow of strings and pianos. “Deep Cutz” is energetic but kind of hard to nod your head to, while the “Karma Hotel” is laid back and eerie – and probably features the best individual verses of the whole album as each member tackles the theme with his own unique interpretation of karma. The experimental track which works the best here is “Safe House,” which could have just as easily been called “Jungle House” based on it’s hypnotic trance and Ming-Xia’s vocals.

The stated mission of the Spooks on this journey is to shake up the industry, although having come four years after The Fugees it’s not quite as groung-breaking. That may seem to be a cheapshot, but that’s not to say that the Spooks aren’t making dope music. “The unorthodox rhyme execution that Spooks use, may leave you the consumer mildly confused,” they rap on “Something Fresh” but it’s not the rhyme execution that’s confusing – it’s why they would wade this deep into the album before recording a song clearly indentifies to you who each rapper is. Even after hearing it, the names may not stick. Spooks function well as a collective, and aside from a couple of musical missteps such as “Bitch Blood” and “Other Script” have put together a musically unique album. Whether you buy into their claim that they represent a totally new direction in hip-hop or not, it’s not hard to enjoy the positive aspects of this album – it’s hip-hop, well done.