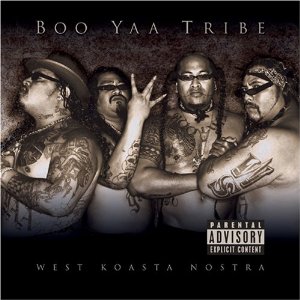 “Unheralded” would be a good place to star when discussing the Boo Yaa Tribe. Despite a career in hip-hop that spans all the way back to 1990’s “New Funky Nation,” many rap fans active during that time would still have no idea who they are. In the early part of that decade they almost passed the threshold of national public awareness. “Psyko Funk” was a hit off their debut, and they made contributions to the “Judgment Night” and “South Central” soundtracks, but unfortunately neither film was a box office smash. Island/4th & Broadway showed a lack of faith in the group and shelved their completed sophomore album, leaving them bouncing around small indie labels the rest of the decade.

Despite these setbacks, Boo-Yaa Tribe persevered through pride in their Samoan heritage and a West coast gangster style that never compromised or crossed over. Similar styled artists like Kurupt and Mack 10 hit it big, but the Boo-Yaa Tribe had to wait patiently to show up again on the radar. Both of these rappers show love to the Tribe on “West Koasta Nostra,” a release that finally hits nationally thanks to Oglio Records – best known for Kool Keith’s “The Lost Masters” and the Grammy-nominated George Lopez CD “Team Leader.” Packaged with a bonus DVD, this new album can be found nationally at retailers like Best Buy, with better distribution now than they had in 1990 when you combine brick and mortar stores with online retail. On “Heated” though their ire isn’t with distributors or retailers, just one man and his record label:

“Let’s take it back like +Pulp Fiction+
So you can, paint a better picture, of this conversation
It all started back in eight-nine
Chris Blackwell said, come to my +Island+ and sign
Headed to New York, +4th and Broadway+
We said – ‘That’s the nigga that discovered Bob Marley!’
You know, +No Woman No Cry+
But we was out there thinkin everything gon’ be alright
I’m tired, but I’m not tired of livin
Just tired of the bullshit this industry was giving
I’m not the first to complain
I’m just the first to say FUCK Y’ALL in every which way!”

The Tribe aren’t taking any chances with going unrecognized or getting played by the system this time. Their entire record is produced by Battlecat, another unheralded West coast pioneer who has worked on hits for everyone from Domino to Dana Dane, from Raphael Saadiq to Snoop Dogg. That is to say, their entire record sans the track “911,” which was produced by and FEATURESEminem, and has B-Real as a guest to boot. It would be easy to get lost in the mix, but Boo Yaa’s frontman Ganxsta Ridd still represents hard on the final verse, seemingly cueing off Em’s style in his flow while going a step further:

“When I – put it in motion, my focus is gettin branded
My appetite for destruction is blasted because I said it
Got you – stumblin for cover, this music dyin in numbers
But you wouldn’t pause and wonder, admittin it’s all glamour
When you – enter the business you thinkin you runnin shit
You witness that funny shit, your bitches they ain’t shit!
We gangsters we blast first, ask questions later
On these – imitators paradin like they some players
Tryin to – save hip-hop the task is somethin greater
Cause we old fashioned coded with loyalty motivators
Get caught and not tellin – or more like killin not carin
I’m ridin – a gangsta feelin, no fearin when gangsters dyin
I’m in a – full circle with homies that’s supposed to bleed
On an +8 Mile+ mission with +Cypress+ and O.G.’s”

The album is unapologetically gang bang, staying true to the style Boo Yaa has had their whole career. “My music retaliates in full/with the Blood from a G, through the veins of a Piru” are the words that open the track “Kalling,” whose funky flutes will no doubt remind some of Dr. Dre’s hit “Bad Intentions.” Which of these two sides are they on? It hardly matters, since you’d be hella foolish to run up on these guys no matter what set you claim. Ever seen a Samoan? Think Rikishifrom WWE SmackDown, and you’ll be on the right track (and by the way, big up to Chris Benoiton winning the Royal Rumble). In other words, the Boo Yaa Tribe are both musically and physically intimdating, and the pugnacious nature of their songs reflects it. Considering the number of noteworthy guests, from WC on “N Full Motion” to Crooked I, Eastwood and Kokane on “Take Yo Fade,” this is a good thing. Boo Yaa welcomes these fellow gangsters with open arms, but still dominate the funky Battlecat tracks and simply refuse to be upstaged.

Even if you weren’t familiar with the Boo-Yaa Tribe, this album has a built-in sound for success thanks to Battlecat. If you’ve enjoyed songs like Snoop Dogg’s “Stacey Adams,” Xzibit’s “Been a Long Time” and Tha Eastsidaz “G’d Up,” this album is for you. The album is filled with soul, from the slow and thoughtful “Beautiful Thang” to the krunked out “Legends” to the rambunctious Dogg Pound of “On Me” featuring Kurupt. As on many tracks, Ridd displays his wit on the latter with the line “I’m Smith Possible, with two Wessons.” No comprende? Check the line-up of Disney Channel on your cable guide sometime. In fact it’s rather ironic that the loveable icon of “Kim Possible,” the naked molerat Rufus, is fond of shouting “BOO-YAA!” whenever they foil the dastardly deeds of nefarious foes. While Ganxsta Ridd might not be the greatest punchliner since Supernatural sliced bread, he’s highly effective and vocally charismatic, with a deep voice reminiscent of Dub C himself. “West Koasta Nostra” proves that like fine, wine true G’s just get better with age. Indeed when listening, the beats and rhymes will make you react with joy too – so stand up and shout BOO-YAA for the Tribe.