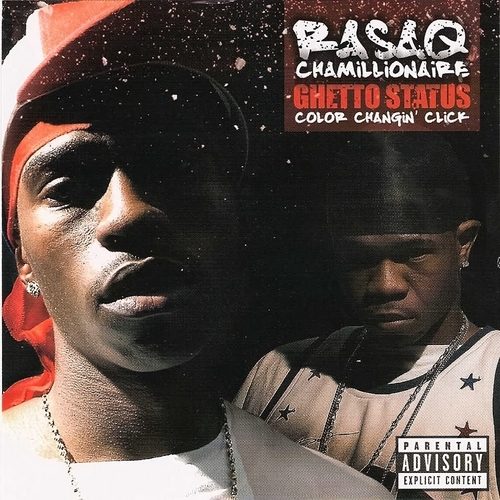 It may be redundant to say this the 20th+ time (and I apologize in advance for it) but RapReviews.com policy is generally not to review self distributed albums. That said, there are exceptions to the rule, and Rasaq & Chamillionaire’s double disc “Ghetto Status” is one. Why make an exception in this case? Chamillionaire should already be familiar to fans of the Color Changin’ Click and Da Swishahouse, and has already appeared on the national release “Get Ya Mind Correct” with partner Paul Wall. Rasaq is Chamillionaire’s little brother, or so says what little information can be found online, so even though he doesn’t have an official page on Big Moe perhaps, but definitely sounding slow tape mixed. In fact, with as little information about “Ghetto Status” online as there is about Rasaq himself (I had to cop my copy of the album from eBay of all places) it probably is a DJ Screw type enhanced style.

It may be that part of the reason you can’t find “Ghetto Status” in traditional retail outlets is that Rasaq is not rapping over original beats. Disc one’s boisterous cut “Gutta Gorillaz” remakes T.I.’s popular “24.” “Fight Right Now” heavily slows up the Youngbloodz track “Damn!” originally done by Lil’ Jon. Joe Budden’s “Pump it Up” gets the treatment on the track “Listen Up.” The best of all might be “Can’t Get No Money,” a humerous re-interpretation of Busta Rhymes’ song “I Know What You Want” over the same beat, albiet at a krunker pace and with Rasaq singing the hook instead of Busta and Mariah Carey:

“You can’t get no money from me, I know that’s what you want
But you can’t get it from me, don’t think about it
Got a lot of do’ but I’m cheap, greedy hoes on the creep
Trying to get you asleep, mashing in your wallet
Baby I know ya, wanna get close to
A nigga with most of, these women these vultures
If you think I’m spose to, be tricking my do’ for
You, then no girl don’t even approach us”

Rasaq’s pretty good as a parody singer, but it’s rapping we all want to hear:

“The chickens wanna find the, nigga behind the
Rims and recliners, seats who’s sittin inside ya!
Already know, but if you need a reminder
You need to go find ya girl who’s thinkin of cheatin behind ya
Creepin behind ya, givin me the vagina
As long as she ain’t a minor nigga, the teeth is gon blind her
The girl see that we shiners, see that we rhymers
Wanna unscrew your nuts, like they teeth is some pliers
They see us on flyers, try to keep up behind us
But them chickens bite the dust, when they squeal from the tires
She like no he didn’t, but yes he did it
Checks with digits, larger than your credit limit”

He’s the typical braggadocious Southern rap artist, with the catch phrase “Rasaq on the block” popping up frequently on his songs. With 36 tracks spread between the two discs of “Ghetto Status” there is certainly a lot of material, so whoever said there’s no such thing as too much of a good thing was wrong. There’s so much of Rasaq’s bragging to go through, it may be a negative in this case. The cleverness is starting to wear thin by the time you get to “It’s the Color Change” at the start of the second album, which remakes Jay-Z’s “La La La” and ends up making you nostalgic for the original. Is it any surprise that the next track “They Watchin'” remakes both Jay-Z’s “The Watcher 2” and Dr. Dre’s original “The Watcher”? The krunk slowed down sound is good to a Dre beat thankfully, and they do blend the song cleverly into the Clipse “Grindin'” beat, which has been changed into “Hood Envy.” The smooth mixes do go a long way towards helping things, but either from relative inexperience or an overly macho Texas style, Rasaq is not supplementing his trash talk with much charisma. As a result, whether or not the songs work often directly depends on how good the borrowed beats sound when mixed down. Beyonce’s “Crazy in Love” works well for “Platinum in the Hood,” but Clipse’s “Hot Damn” on the song “Fear in Ya Heart” doesn’t.

Rasaq claims to be “Houston’s hardest” while “y’all niggaz Immature like Houston, Marques” and does occasionally generate laughs with these type punchlines. Rasaq’s material on “Ghetto Status” bogs down over the long haul though. Eventually, the fact these beats are borrowed as opposed to original is what hurts the presentation the most. With no disrespect to Chingy, “Right Thurr” was not the greatest beat to begin with, and hearing Rasaq rap the song “Birds” over it doesn’t improve it. Lil’ Kim’s “Magic Stick” doesn’t sound right as “Holla at Me,” although if they could have gotten 50 Cent or Young Buc to guest on this mix it might have worked out. It just gets to be too much in the end. Even when it works pretty well on songs like “Screamin’ My Name” (originally Juvenile’s “Act a Fool”) you end up noticing what Rasaq & Chamillionaire use to rap over as much or more than what Rasaq has to say himself. Rasaq does sound like he has the potential to be the South’s next Lil’ Flip, but ultimately the “Ghetto Status” of this quasi-legit release and it’s borrowed music will keep a larger segment of the population from finding out about this MC. If Rasaq hooks up with Southern producers like Noke-D, Salih Williams, Mike Dean, or even some of the better known names who produced the original tracks he raps over and shows more emotion in his flow in future, he can move from his ghetto status to one that’s hopefully more gold or platinum.