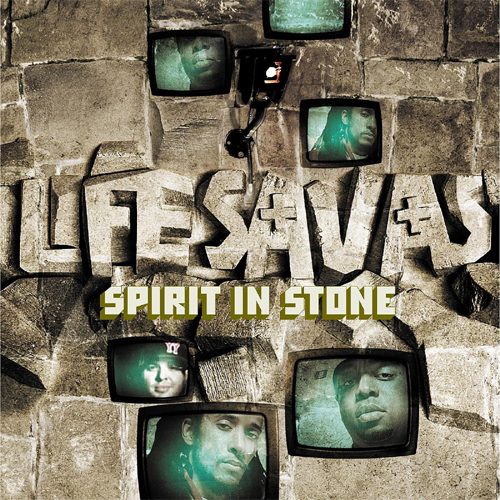 Oregon? Okay, so they’ve got “Ducks” that are perennially at the top of college football. And no doubt, Portland sounds like a fly-ass city. Who knew it would become a hip-hop mecca though? I should have. After all that’s where former RapReviews funnyman DJ Fatboy resides (even though he always used to talk about running shit in Salem). And back in the day, I even checked out the self-described “Hardest working hip-hop band in Oregon,” the Five Fingers of Funk for HEADz UP! magazine. Somehow though, I slept on Lifesavas.

Lifesavas recently signed to Blackalicious and Latyrx that was once known as SoleSides Records. Inking a deal like that puts a stamp on a group, no different than signing with Defintive Jux or Rhymesayers Entertainment. It says simply that you’re an underground hip-hop sensation, slept on by the majority of people who watch MTV and buy Jay-Z records, with phenomenal lyrics and headrocking beats to match. With the opening track “Soldierfied,” Vursatyl and Jumbo are certainly trying to live up to that rep:

Vursatyl: “Charge it to the game, but what if the game got bad credit?
With bullemic bank statements, and IOU’s that’s shredded
The block’s on borrowed time where I stand; seems like the game
is reposessin dreams and cancellin niggaz lifespans
The streets? The streets can go to hell, I want freedom
The streets is watchin the idiot-box and ‘Cops’ re-runs
My feelings hardly hard and hardly violent
Imitatin the dead man will have you course on auto-pilot
Blame the white man, I feel you, for us justice and who lost
The white man flew in 9’s and tec’s to flood school yards
The white man ain’t pull the trigger, and took it too far
And the white man ain’t goin to jail – nigga you are!”

With production by Chief Xcel and a funky guitar riff by Teak Underdue, you could hardly have a hotter backdrop to such provacative thoughts. Vursatyl has the nastier punchlines like “cowards who couldn’t get open in a C-section,” but don’t sleep on Jumbo: “If your cypher’s Chuck Taylor’d or shell-toe, imagine ice-skatin uphill as hell froze.” Jumbo’s voice is a mixture of Nas and Ras Kass, while Vursatyl is Portland’s answer to Pharoahe Monch. Ironically, one could interpret his words in the Jumbo produced track “It’s Over” as taking pot shots at overly verbal MC’s who “rhyme in Arabic with a Portugeuse accent and change your name to Acknickalous Guggenheim/recorded your demo 30 below zero in the basement of a buddhist shrine – YOU SUCK!” Far from being an hour long exercise in slaying whack MC’s though, the Lifesavas have fun with tracks like the carribean influenced “Fever”:

Jumbo: “Keep ya mood swing, inside ya mood ring
Ya got the good thing, brown velvet skin
Meltin hearts of men, you and your bangin friends
I sleep with angels for protection like I’m Spragga Benz
See I’m African, very African
Come and step in Brother’s temple, see what’s happenin!
We pack ’em in de dance, Jamaican renaissance
All woman quick to shive like dey inna trance
Den me tell a gwal, from Kingston Franklin town
Keep time and break it down with fever child, thank ya now!”

One can’t forget to mention DJ Rev. Shines in this mix, who provides many examples of his excellent turntable wizardry throughout. There are no shortage of excellent guest appearances either. “Livin’ Time/ Life: Movement 1” features fat flows from Gift of Gab. “Selector” gets down with J-Live, “Emerge” has damn near the entire Quannum roster on it, and Libretto drops in for a verse on “It’s Over.” Production may be one of the few challenges to Lifesavas having the trifecta for their national debut. Jumbo does a lot of the music, and while he’s never whack there are times the beats doesn’t strike a resonant chord. “Hellohihey” is a good example – a simple drum tap, a strummed acoustic, and music that is totally overwhelmed by the lyrics. “Head Exercise” on the other hand shows he can take it to the next level lyrically and musically at the same time, with a track making disjointed elements stumble each over into puzzling perfection like a DJ Premier “D. Original” style banger and snaps like “you couldn’t hold your weight on a Jenny Craig mixtape.” Hot shit!

Overall there’s a lot to love on the Lifesavas. The smooth swing of “Fa’ Show” lives up to it’s name, as does the creepy sound of “Skeletons.” The harmonies of “What if it’s True?” are tight, as is the simply effective closer “Me.” The Quannum imprint definitely seems to have been passed to Lifesavas, who definitely carry the vibe of being hip-hop’s next Blackalicious, except with two MC’s instead of one. If there was ever a reason to sleep on Oregon as the next home of dope underground hip-hop artists, there isn’t any longer.