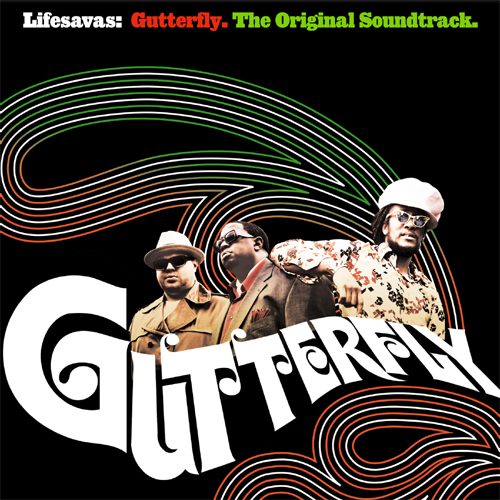 A soundtrack to a nonexistent movie? As a popular theme for concept albums, Portland’s Lifesavas, consisting of emcee/producers Vursatyl and Jumbo the Garbageman, attempt to continue the legacy of this accepted genre of music through their sophomore LP “Gutterfly: The Original Soundtrack.”

A significant jump from their debut album “Spirit in Stone” released in 2003, “Gutterfly” moves towards an entirely different direction ever since the Lifesavas inception into Quannum Projects, with the help of Chief Xcel in the late 1990s.

Inspired by a project from Baraka Feldman during the era of blaxploitation movies, it became a coined term combining “black” and “exploitation” that became popular in the early 1970s. At the time, these movies targeted the urban African American audience while mainly featured black actors and were the first type of movies to include soundtracks with soul and funk music. As if starring in their own blaxplotiation movie, Lifesavas reinvent themselves as the characters of Bumpy Johnson (Vursatyl), Sleepy Floyd (Jumbo), and Jimmy Slimwater (DJ Shines) who attempt to break out of the imaginary urban sprawl of Razorblade City.

With a mixture of sounds from horns and bass, the album’s title track, “Gutterfly” featuring Camp Lo, who makes reference to “Luchini,” breaks down the movement of being “G-Fly” as they show in the clever hook:

The similar funk and soul resonance are found throughout the album and constantly reminds us of the ’70s roots and foundation for “Gutterfly.” As high pitched strings reverberate in a constant, yet fast rhythm in “Shine Language,” the rhymes deal with socio-economic issues and proclaim that “we speak the language that’s divine.”

The issues of politics and society flourish throughout “Gutterfly” as seen in tracks such as “Long Letter” featuring Don Blackman. The track imagines a letter written to a soldier at war informing him of the changes in his family, the impact of the war back at home, and the political activism thriving throughout the nation. Also, “Freedom Walk” featuring dead prez and Vernon Reid of Living Colour, it discusses self-determination, choice, and the lack of restrictions that lies in each and every one of us. It challenges the individual to take advantage of our own independence and free will.

While Jumbo produced most of “Gutterfly” with the help of Vursatyl and Shine, they also had the help of producers Oh No, Vitamin D, and Jake One. In addition to the variety in production throughout the album, “Gutterfly” features some spectacular guest appearances to step it up a notch. With blaring horns for the introduction in “A Serpent’s Love” featuring Ish, better yet known as Butterfly of Digable Planets, it shows the deception of disingenuous friendship as the hook recognizes:

“Night Out” is a more somber track featuring “The King of Interplanetary Funkmanship” George Clinton and Meganut. Over an eerie, synthesized beat, the rhymes are devoted to encounters of close calls as Lifesavas relive stories of mistaken identity and the racial discrimination that is accompanied with it. “The Squeeze” features Brooklynites Smif N’ Wessun on this hard hitting bass infused track full of synthesized organs. The track compares Brooklyn and Portland, although in the end, the two hoods as seen as the same as “we in this together, you know the squeeze don’t stop.”

One of the more commanding tracks in “Gutterfly” is “Dead Ones” featuring the band Fishbone known for their fusion of punk, heavy metal, ska, rock, and reggae. With a more experimental sharp beat consisting of horns, drums, and harmonious chanting/singing from Fishbone, “Dead Ones” is a tribute to all of the fallen ones in our lives as:

“We’ve all got to live our lives somewhat good
For the dead ones this life is gone
We live our lives on the puppet strings attached to the universe
And from the inside someone call it the universe
Make your dreams come true ’cause the sky’s falling
Put your thinking cap on instead of yes yes y’allin
We got time one this marble of blue, but it’s so short”

If you’re fortunate, you can also try and snatch the “Dead Ones” remix that features verses from Nas in his “Hip Hop Is Dead” track “Hope.”

“Gutterfly” is a great example of a concept album that takes us on a complex voyage as the Lifesavas relive their lives through their fictional characters and make connections from real life situations through their music. Although other albums have come up with similar concepts such as Madlib’s “Beat Konducta,” Lifesavas mixture of solemn themes, serious political issues, and lighthearted humor encompasses what a valid movie consists of. Their gift of imagery through lyricism, beats, and authenticity is mind-boggling as we almost forget what this music was based on… nonexistence.