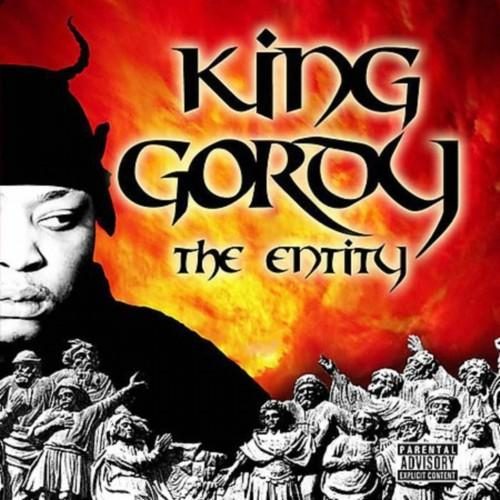 WEB Entertainment’s Mark and Jeff Bass done unleashed a devil-horned Rock City MC by the name of King Gordy. You may remember him playing the part of Big-O in 8 Mile, and now he steps into the arena with “The Entity.” A self-professed former crack slanger and ex-convict, Gordy seems to be tapped into the pulse of the ghetto streets with his dark and “grimy reality tales.” He himself describes his music as “hip hop with a rock edge.” I suppose that may be the case as the liner notes state that the bulk of the production is handled by “Mark and Jeff Bass for F.B.T productions, in association with EMINEM.”

The opening “The Entity” gives us a verbal collage of what the entity actually is. I found its sound bytes rather comical. “Nightmares” is the second cut which contains a lyrical interpolation from that insane flow’n’verse that Biggie spat on “Notorious Thugs.” Basically, Gordy spits his own gruff shit in the same path that Biggie took. Bad idea. I didn’t see the point. Why purposefully follow something already revered? You know it’s going to draw comparisons and it doesn’t exactly scream of originality.

Another Bass brothers’ beat is the order of “The Pain,” and here Luis Resto does some wicked thangs on the keyboard. A trend carried along admirably on this LP is definitely the beats. Gordy’s hoarse voice carries well over this tautly-constructed, orchestral sound. On the third verse, Gordy yet again steps on the toes of another hip hop milestone, by using part of Meth’s verse “I came to bring the pain, hardcore from the brain…” Shawn Carter recently stated that he only says a BIG verse to ‘big up’ his brother. Fair enough. I struggle to decipher what King Gordy is doing reciting Meth and Onyx rhymes on “The Pain” and “Fight” respectively. I see no need for that. As Sam Jackson said about Young Eddie in the “Raw” opening, “dat boy’s got talent!” He has no need to re-tread someone else’s footsteps.

Nevertheless, the no thrills/no gimmicks Obie Trice pops up on “Situations” to beg Gordy to commit murder. These are the results:

“When Darkness Falls” is a harmonic and depressive ode to the streets, that acts as a prelude to the murdering spree on the “Playground” skit. A killer cut with one of them deep, bass-laden backdrops is “Time to Die.” That black shower cap-wearing Dirty Dozen member Bizarre guest stars in this hilarious episode. Gordy tones down the hollerin’ on this one and puts his visceral flow on display:

“Ongoing investigation, I been compared to Jason
Voorhees for choppin’ up four teens by the lake
For God’s sake, they’re only fourteen
eyes open like wide awake, been dead for 4 weeks
Smoking weed takin’ Thorazine
Death is certain, homey please think morbid things
Self murder, what’s coursing through my veins?
Horrible, hurts the brain – listen to Jimi Hendrix
Worshipping Kurt Cobain
The ghetto Edgar Allan Poe
Sever your head with a staff to the throat…”

When Bizarre’s big ass comes on, you send the kids to bed and turn down the volume, coz it’s definitely ‘adults only:’

“I’m supposed to be playing professional hockey
short and stocky, with a hook like Rocky
I’m dimmed in full blown AIDS
Matter of fact I got full blown AIDS from fucking Jon Benet
My little girl died of heat exhaustion
I thought she should be alive after two weeks in Boston
Sexy women, I fuckin hate
Tied me up in a rope and feed me corn flakes
My grandmother she just turned 75
for a gift, I gave her a black eye…”

I’ll say it once, and and will repeat it if need be; Bizarre needs to seek professional counselling. DAMN! The ensuing track is by the “world famous Fat Killahz.” Gordy’s large clique spits punchline-laden couplets, in the company of a sing-songy beat by Silent Riot and Steve King. “Pass me a Lighter” is another Bass brothers’ construct, along with “No Lights” where King Berry Gordy relates despondent tales of his infancy. Jagged guitar riffs and chords are heard on “We Violent,” and Sindy’s lush voice makes observations on hiding behind an addiction in “The Mask.” The decidedly dope “Stress” is filled with a crude electric guitar ripping at the back of Gordy’s verse, while Sal from P.H.E helps out on the track.

Finally, the 45 King’s “Nobody knows nothing” is Gordy’s sonnet to loneliness, depression and hatred; an apt way to shut things down. On the whole, the dark Gordy manages to carve out an identity for himself and crew of overweight murderers. Thus, if your fiancÃ©e returns your ring, your manager gives you walking papers, or if the Vikes blow a season on one play and you feel a bit demoralized and disheartened, drop in Gordy in the disc drive and share the pain.