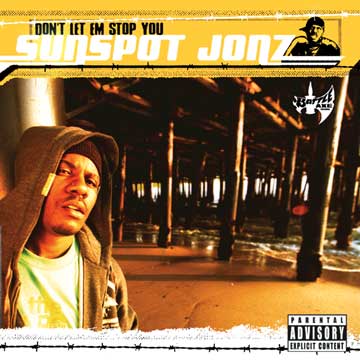 In underground West coast DIY indie hip-hop, they don’t come more tried and true or battle-tested than the Mystik Journeymen back when he was known as BFAP – an acronym which among other things can stand for “Bitch-Slapping Faulty A&R’s Pronto!” Whatever name you know him by though, his reputation has been shaped by a decade of worth of Mystik Journeymen albums and Living Legends cameos. His appearance on Moka Only’s “Lime Green” though was a sign of things to come, as it wasn’t long before he too was signed to Battle Axe Records, where Moka raps chiefly in Swollen Members when not on his own. Battle Axe has dipped heavily into the West coast underground of late, featuring legends in their own right like Project Blowidian mic wizard Abstract Rude and Long Beach’s own LMNO, who definitelydoesn’t roll with Snoop D-oh-double-G in the LBC.

Like the Legends themselves, Battle Axe is built on it’s indie hip-hop credentials, so bringing Sunspot Jonz in the mix seems a natural match. Produced entirely by Jonz himself except for three tracks, one apiece by Dirt Nasty, Moka Only and The Grouch, it’s the perfect opportunity for Jonz to showcase his skills on both sides of the board worldwide thanks to the major league distribution Battle Axe releases get. In fairness, the following words then are meant as both praise and criticism – Sunspot Jonz is not the easiest artist to vibe with. Think of an abstract painting whose hidden subtext you couldn’t discern. Think of a verbose novel you were forced to read in a lit class translated from Russian or French into English. Think of any five movies you’d see screened at an independent film festival. Sunspot Jonz is cut from that same cloth – obviously brilliant, but obtuse to all but the narrowest segment of his audience. The clearest message you may find on “Don’t Let Em Stop You” is on the spacy title track, where he holds back little disdain for any rap form even slightly pop:

“Runnin the streets with beats, comin with heat, defeat
Cunnin ways of speak, done in phrase compete, delete
Backspace you freak, when the keyboard meet
the spacebar, move, your feet
Return, I eat, and live, these beats
and lyrics, control, my spirit
Free, to a rhythm, lyric, slowly, the CD
Hold, a beast, that’s gonna shine light
Trick Daddy’s teeth, in a body contest
with Steve Harvey, who’s, beef?
Who’s chicken (Whopper) more finger lickin dough in the kitchen
Tryin to batter up I’m on a mission
I never hear that, like Loon’s solo LP
That’s unheard of, like Clarence Thomas ridin with me
And we on our way to MTV
To battle to make a band with P. Diddy
Fake shit must cease, imme-diate-ly”

Jonz is in the mold of Aceyalone and Pharoahe Monch rappers, who often look at the rhythm of a beat as oppressive bars to free their lyrical flow from. He goes on and off the beat at will, and rhymes words whenever he feels like it, as opposed to the end of each line. As a result, the best chance for a Living Legends neophyte to relate to Jonz is in hearing his beats, which on this album are a mixed bag of tricks. “Mission Begins” is a good start for this release, a mellow track which warmly invites the listener into the fold. “Escape the Past” is almost the opposite – twice as loud and hard, a jarring cacophony of pulsing bass and electronic noises. “Broken Wing World” goes right back to the intro’s mold, with Jonz singing the hook and admitting to his own eccentricities with the lines “I’d rather watch TV, than talk to people, sometimes I feel evil – inside.” Once you slide past a brief interlude to “Damnu” Jonz has that electronica style sound again, although in a more pleasing presentation. The discordance of Jonz’ production styles though can leave an unprepared listener feeling lost, as though the needle was jumping from science fiction soundtracks to Aceyalone records at it’s own whim.

There’s plenty to like about “Don’t Let Em Stop You” if you are willing to step up to the challenge. Despite his anti-pop predilictions, Moka Only’s work on “There She Go” as producer and guest give Sunspot Jonz a sound that would be comfortable in any urban contemporary mix. “Hello” sounds like a track that was recorded at 4:20 in the afternoon, in more ways than one. The all-star Living Legends track “Unstoppable” will make West coasters and underground rap fans alike hella happy. Saul Williams could dig Jonz’ on “Life’s Poetry,” and the Jonz instrumental “Time Travel” is prone to cause the opposite of suspended animation due to head-nodding. Jonz can be oddly uplifting on songs like “Pick Up the Pieces” and “Highlife” but can be equally as perplexing lyrically on songs like “Devilsfood”:

“Michael Jackson looks whiter, Liz Taylor for hire
And higher and higher, off drugs, off life, off nice
cough white china white soft lights (soft lights)
Dimmed right is my mood tonight
Have faith within it’s hard for me to trust women like Robert Blake
when, your wife is everyone’s past mistake
It’s hard to fake, holdin your poker face
MC’s got inner issues goin on like Will & Grace
that you can’t control, cause everyone plays they roll
Even if they sell they soul to get it, forget it, again
I’d rather hold my gun and
make terroristic threats like Iverson
and then throw a party while the po-po stake out my house”

It doesn’t hurt to brush up on pop culture and current events in the news before listening to Sunspot Jonz, because he’ll throw out more references than a Dennis Miller rant, of which like him you may only catch half. The irony of “Don’t Let Em Stop You” is that it’s clearly not an album meant for the majority of rap listeners, be they old school or new school, West or East coast, underground heads or pop rap afficianadoes. There’s a cult audience for Living Legends releases, which may be smaller than the wide distribution Battle Axe Records can reach, or which may in fact be larger than this writer perceives it to be. Nevertheless even the most hardcore of indie underground rap fans should only take Sunspot Jonz’ latest album if they aren’t afraid of an album requiring careful repeated listens to discern. At times it can make Company Flow’s “Funcrusher Plus” seem easy by comparison, but in the end it’s still worth the effort.