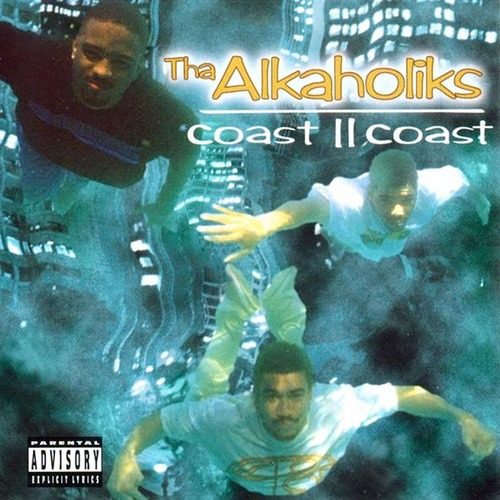 During my pre-teen days before I discovered the magical wonders of alcohol, a fun-loving, lyrically-skilled trio from the left coast had me enthralled with their first effort, “21 and Over.” Their second at-bat was “Coast II Coast,” and in my mind it cemented Tha Liks as no holds-barred verbalists with razor wit and flows to match. This is an essential party LP where these under-rated MCs showcase a cornucopia of skills; from the production table to the booth. “WLIX” is where the Lootpack “sets it off by sprayin” lyrics “in your face.” Mad Lib rocks the “mad vocab” but Tash steals the show with the “minimalist percussion-driven head-nodding beat” from resident producer E-Swift:

“No releases on the two steel wheels
Comes the lyrical skills that kills more ducks than oil spills
My niggaz run for the hills, I can track em through the mountains
Rico kick that kind of shit that got more bounce than Roger Troutman
So pass the weed to the top top seed
With lyrics as deadly as the VD’s that make ya lungs bleed
Plus I dig like coal miners through the crates of old timers
I be blowin up the spot like dynamite with one-liners
Oh reminder, to my ex-bitch when I find ya
I’ma smack you for them times I had to start sixty-nine ya..”

Reminiscent of the Abstract and Dynomutt, the dynamic duo of J-Ro and CaTashTrophe are accompanied by a bomb-ass producer in E-Swift. Punchlines, effective wordplay and caustic charm are on display throughout this legendary opus. The under-age drinking narrative in “21 and Under” is a masterpiece of beat construction and accompanying lyrics. Tash reminisces about running into a gang of truants that jack 40s from the local convenience store, only to share them with the sage in Tash; who drops knowledge before parting ways with the youngsters. J-Ro ain’t about to be undone though as he schools drunk MCs on hogging the mic. Tash ponders how his flows fold “MCs up like money” and how he “leaves â€˜em in the corner broke up like crash dummies” on “Read My Lips;” a vehicle for dope lyrics and a merrymaking mood. But the stellar noun-flipping antics of these two cats is ever evident on “Let it Out,” where “The Human Fly” loop from “Enter The Dragon” is woven into the beat and just adds that cherry on top. Fuckin’ wicked. Diamond D deserves a Nobel for creating such a memorable beat, that takes one back to the days of intelligent and experimental beat construction. The NFL-infused flows from J-Ro (“The rhymes I got, hit like Ronnie Lott”) and Tash are without equal:

[Tash]
“I bust the Alize on ice on down to Beck’s brew
I got more fame than Dana Dane I hold mics like Donahue
Cause I’m committed, admit it, you was +Too Legit to Quit+ it
Dancin with toilets now you can’t get busy with it
With the vintage Olde Gold gettin dusty in the cellar
I throw my shit deeper than Jeff Hostetler
[..]
With flows rough enough to cut ya, beats enough to touch ya
Known to rock the coolers with the liquid rhyme structures
It’s the man with vocal tones that hurt words to broken bones
I got flows throughout my body deep rooted like kidney stones
So tap into the cold while I torch MC’s
Cause I be itchin for a scratch like the Force MD’s..”

[J-Ro]
“I can’t hold it in my friend the Liks get the most clout
We be scorin points like Michael Irvin on the post route
And just like +Troy+ boy, I make your bones +ache man+ (Aikman)
Just how much punishment can a rapper take man?
The homes be like “Where you been?” man I been creatin
We had you salivatin like the dogs that be waitin
for the Kibbles n Bits, I love pits tits and rap hits
And +Bruce Lee+ flicks, and clockin yapes with the Liks..”

Now, y’all remember how Desmond Howard and his college Dante Hall-esque run-backs while he was a Wolverine? “All the Way Live” is something that’s gon get you amped like Michigan fans in Ann Arbour. Once again Tash lets that silk-ass baritone rip through the speaker as he delivers one of the quotable passages on the LP:

“Caps get peeled rolling in my force field
Like a nine with hollow points I keep rap flows concealed
So when you walkin down the block you better watch who you approachin
I’m not your R&B singer, so ain’t no need for vocal coachin
Just a forty and a roach and I’ll +evict+ you out the units
While y’all niggaz couldn’t +move me+ if you worked for Starvin Students
Downin all beer types, from St. Ide’s to Red Stripe (yipes!)
The menace stuffin mics down motherfuckers windpipes
Has returrrrned, to burrrrn, it’s time y’all niggaz learrrrrn
I neutralize y’all niggaz like relaxer in a perm
with flows that go against the grain with a story so compellin
I should mind The People’s Court, snatch the mic from Doug Llewellyn
and host my own show, after Bill Cosby comes Ricooooo!
Transmitting live to all my black people
Catch my drift, I’m down with my nigga E-Swift
My name is Tash, I’m from the group that you don’t wanna fuck with..”

The Abstract makes a famous guest appearance and maintains that the verse be “cuttin and slashin like Luke’s light saber.” That ain’t even the best part though. “Pow, bust my liquid-ass style.” J-Ro’s verse obliterates all opponents and tops it off with the signature move that was made unforgettable by Desmond Howard:

“I’m in this rap game so I’ma aim to be best
It’s fresh, but off the head it’s like the dunk contest
I don’t walk the street, I roll my Jeep in an instant
I rock the beat to sleep like an infant
The Likwit crew, comin like this on you
With that four minute Olde English piss on you
You’re bustin dumb raps off the cap, oh shit
But I got the pen and pad locked down like a pit
I let the, ink submerge into the thin wood sheets
Beats make my head bop, so I’ma rock it for the streets
I fill all my days with big butts and boom
I let my pants hang cause my big nuts need room
I’m not old school, or new school, I’m outta school, I’m ditchin
When my girl starts bitchin I gets hot like a kitchen
I fly down like the Chi-town wind
Cause I got the +iller noise+ (Illinois) to make the hardcore grin
When, the saints come marchin in
I’ma roll right by em in the fly Lincoln
Roughneck niggaz wanna box me down
Cause I got the ladies lookin like Foxy Brown
The Liks bring the beer Tip sticks it in your earholes
I drop the mic and strike the Heisman pose…”

GODDAMN!!!!!! You can’t fuck with that style. But what a pity because the instrumentals leaping into and out of these tracks are also masterful beats that should have stood alone. However, Mr. X to the Z makes his first appearance on this LP and drops a memorable verse on the quest to slap skins with a female on “Hit and Run.” Can someone tell me who uses pick-up lines such as “Can I get in your backfield like Cornelius Bennet?” J-Ro, apparently. Some of these one-liners are so acerbic with wit and charm that my descriptions alone cannot do them justice. On “2014,” the group’s creative vision is enhanced as J-Ro wonders and takes a profound gaze into the “apocalyptic future” of hip hop.

The party cut that gets at me is “Bottoms Up” where Tash yet again exterminates MCs and proclaims that he “be housin niggaz like they put up for adoption.” King Tee makes an amusing guest spot on this track that got more funk than Funky Finger Productions. BAAAM! Or should I say “DAAAM!” This bouncy escapade will make you consider arson as a career coz it sets shit off with its bravado lyrics and another astral pounding-bass beat from E-Swift. “Flashback” is a “relentless, breathless B-Boy hip hop song that would not sound out of place in 1987,” and “The Next Level” underlines the maturity and keenness to venture out musically.

1995 will remain in our minds and hearts as a year that could and damn well may have been the last great year in hip-hop. It all went to shit from there after the “Killing Me Softly” cover hipped the artist community about record sales. Since then, wicked-ass LPs have come and gone, albeit without the frequency and consistency of the pre-Nine Five era. “Coast II Coast” delivers sinful one-liners with the audacity of a Sam Jackson, gets you jumping like the Laker Girls, and has more references than the Physician’s Desk Reference. It’s So Necessary.