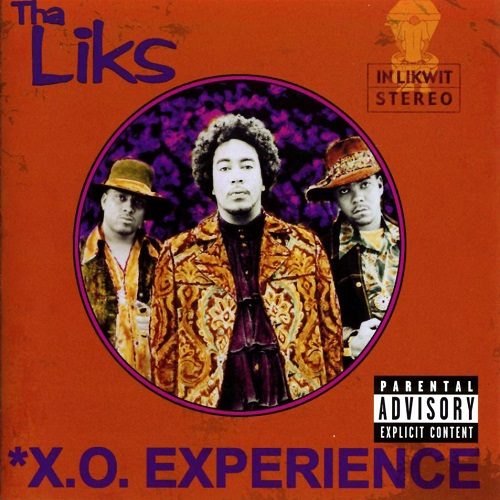 Tha Liks are going commercial. They changed their name to be more media friendly. They released a single that was (gasp!) produced by the Neptunes and even had Pharell singing the hook. There are rumblings that E-Swift completely changed the sound of his production. I am here to dispel all these bullshit rumors. Tha Liks are old school. They’re not gangstas. They’re not hustlers. They’re not pimps. They’re MCs. Plain and simple. In a day when everyone has to be the hardest, the richest, or the biggest baller, Tha Liks are still just out to have a good time, drop some humorous lyrics, and get the party started.

I’ve heard claims that E-Swift’s production on this album mimicked Rockwilders. That’s simply untrue. While I do acknowledge that “Bar Code” and “L I K S” have some Rocwilder-esque background effects, the beats themselves are pure E-Swift. As far as I’m concerned, there’s only three tracks on the album that sound like they could be Rockwilders: the two he produced, and one produced by DJ Twinz.

The album gets off to a tremendous start. A funny as intro is followed by the absolute banger “Bar Code”, which features Xzibit. Damn, this IS the way to start a party. The beat is bananas, Xzibit rips his verse to shreds, while Tash and J-Ro both come through dope. J-Ro’s drunken boasts may have been the tightest on this track:

“I drink a lot of ale, smoke a lot of L’s a day
I got kegs in my room and bales of hay
25 bowls’ powder in my ashtray
Some like it slow some live the fast way
All the ladies know I’m wild and nas-tay
I life the Rap Life like my nigga Tash say
I down the whole brew, never halfway
Back and forth to the bar in the Likwit Cafe”

Speaking of bangers, this is followed by one of equal if not greater value, the Rockwilder-produced “Run Wild”. This is supposed to be the next single, and I can’t argue with that call. The fast paced beat is pure Rockwilder, at his finest, and the back and forth Run-D.M.C. rhyme style is very well executed. Tash once again destroys his first verse, drawing the listener in from the very beginning:

“Niggas, bitches, back again to get it crackin
Smoked a blunt, drunk a brew, turned around and look what happened
(What ya workin with?) I’m on some party clique
Weed smoking drunk, ODB-Bob Marley shit
(We got that shit!) Some ladies come and get it
Custom fitted flows for all the hoes who fuckin with it
(Liks coming thick!) But where the party at?
You know how we act once we buzzed of that cognac”

The next song explains what each letter in “L-I-K-S” stands for, over a typical E-Swift style banger with a horn loop. This is one of the several songs in which Tash, widely acknowledged as the groups best lyricist, gets outshined by his Alkie brethren. E-Swift makes one of his welcome appearances on the mic in this cut, and does not disappoint:

“L: Lush, lewd
Leaning on the edge of the bar, loud, rowdy and rude
Longevity, lots of energy, legendary
Likwit crew niggas for life, large followings
I: Illustrious, impressive
In your rap section, not imperfection
International, inner city nigga
I’m the truth, in the isolation booth
Idolize my group”

Busta Rhymes comes through on “Bullyfoot”, and while it’s not as good as his guest spots usually are, his verse is still above average. The beat, produced by DJ Scratch, produced the video-game sounding beat. The only weak cut on the album is “My Dear” featuring Defari. Damn this song is the definition of mediocre. It samples the same Pharcyde song that Joe jacked for the “Stutter” remix, and it’s not much better. The verses are probably the weakest of the album, and Defari’s is way below standard. Thankfully they rebound with the filthy “Da Da Da Da”, in which Tash proclaims:

“Ayo, the Alkies set the trends that the whole world follow
Fuck a CD, fuck a tape, we should sell this shit in bottles
Are you a role model? Nah, CaTash’ll steal your beat box
I drink, cuss, and smoke and smack niggas with cheap shots”

Classic Alkie material. The “40 Oz. Quartet (Part I)” is one of the true highlights of the album. The beat is simply a baseline and a sound of people blowing on bottle openings, as J-Ro drops a beligerent verse, with gems like “They tried to send me to AA, I said ‘Eh eh / Not today-day, I just bought a bottle of Tangueray-ray’.” Rockwilder drops by for his second track, “The Sickness”, which features Butch Cassidy on the hook. Pretty typical Rockwilder beat, nothing spectacular, but a solid cut. One of the best tracks though is “Going Crazy”. The beat is E-Swift at his finest, and the drunken chorus is tight as hell. Tash is ill as hell on here, and J-Ro isn’t at his best but still has some good one liners.

The track on here that truly deviated from the typical Liks style is the lead single, “Best U Can”. Of course you’ve all heard it. The thought of Tha Liks over a Neptunes beat and Neptune-sung hook made most fans cringe at the very thought, but honestly, this song is tight minus the corny hook. But you can’t argue with the reasoning behind this song, and it worked: Tha Liks had the #1 rap single on LA radio stations and the #2 rap single on New York radio, so obviously they’re getting their name out to the public, which is what this track was designed to do.

Tash’s version of the “40 Oz. Quartet” isn’t quite as entertaining as J-Ro’s, but is still a worthwhile listen, except for the corny ending. “Anotha Round” utilizes an ill guitar rif, however, the verses are not Tha Liks best work. Still, this song is entertaining as hell, and is a sure-fire party starter. The founder of the Likwit Crew, King Tee himself pops up on “The Bubble”. This is one of the true highlight tracks, as Tash comes through with some of his trademark punchlines:

“Homegirl, we Likwit niggas
Take the time to get to blow us
tell your friends come kick it with us
All jokes aside, we slide slippers
Money falling out my pocket like I robbed nine strippers”

Xzibit comes through again on “151”, but this time he’s only on the hook. DJ Twinz’ production sounds a lot like Rocwilder’s on this one, but it is still dope as hell. Xzibit’s chorus is classic drinking song material, Tha Liks are once again on point with the rhymes. As usual, Tash steals the show: “So for the next 20 seasons Tha Liks is gettin even / While we drop, drop, drop… drop it like it’s freezin / Party down for now reason, I play hoop with the spins / I even celebrate the loss when the other team wins”

The final track is a fitting ending, with perhaps E-Swift’s best (or at least his most innovative) beat on the album, “Promote Violins”. The guitar rif and frantic violins provide an interesting backdrop for Tash and J-Ro, as well has guest star Kurupt, who actually drops a decent verse (a rarity these days, it seems). But the song is done in by a WEAK ass hook. Still, the rest of the song is sick.

Tha Liks are still basically the same in structure: Tash is the lead man on the mic, with J-Ro doing a solid job as the backup and occassionally stepping to the forefront. E-Swift provides most of the production and picks up the mic once in a while, normally dropping a good verse. Their lyrics are still purely based upon the topics of being an ill MC, drinking, smoking, and getting laid. This album has a very different feel this time around: E-Swift’s production is still dope, but it’s much less murky nowadays. He also produced less tracks than usual (9 tracks out of 15). And Tash didn’t come with as many punchlines as he normally does.

Bottom line: as long as you don’t come in expecting “21 and Over” or “Coast II Coast”, you’re not gonna be disappointed with this album. It’s truly a breath of fresh air; in a day when it seems like everyone’s gotta be a bad mothafucka, a flossy hustler, or a political activist to be taken seriously in rap, Tha Liks remember that’s still okay to just make songs about having a good time. Buy this shit, bump it in the ride, pop it in at parties, whatever. You can listen to it from start to finish (just skip “My Dear”), and be entertained by it. And hey, they may not sound like they used to, but at least take solice in this, old Alkaholiks fans: it’s a hell of a lot better than “Likwidation” was.