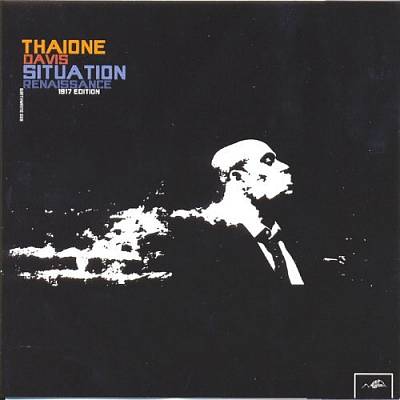 Few rap artists dare to use their real names. For every Lauryn Hill and 2Pac there are thousands of artists with fabricated nicknames. In certain cases, the choice to reveal one’s name comes with a certain vulnerability. From the get-go, these emcees are exposing themselves on wax. To an extent, rapping is an extension of thoughts and feelings, a way to get things off of your chest. By allowing the audience to know your true name, you permit them to feel that much closer to you. Then, if you dare, you can bare your soul.

Thaione Davis is his name, pronounced “tie-wan”. He doesn’t hide behind any moniker. There is a reason for that, too. To know this emcee’s music, in many ways, is to know the person behind it. “Situation Renaissance,” his follow-up to “Progress,” is a surprisingly intimate and intense listening experience. There are only eight tracks, but it is safe to say that there is no filler to be found.

The introduction to the LP, “One Year After,” features Thaione talking over a fantastic beat for a couple of minutes. This fades into “Monologue,” and the first thing to catch your attention will be the playful horns and flutes. Thaione speaks from his heart, and this is evident here. When he starts his verse, it is obvious he has a lot to say:

“Listen, he’s back, D-A-V-I-S
and I ain’t never felt this feeling before
(call it a transition)
monologue mission meant to whip you with precision
like my peoples in the field, cotton picking, but you couldn’t relate
it’s like a changing of the Gods, mad simple
hope your mental give advice
cause your stomach call my inner plights
an out of body experience”

This is a perfect snapshot of his performance on the EP. Because of the rapidity at which most of his bars are released, a lot of what he says is hard to catch. With the right attention, however, Thaione’s performance is one worth noting. He expertly combines insightful political lyrics with personal touches and battle rhymes.

The other side of Thaione Davis’ talent is producing. Each track is a unique fusion of jazz and hip-hop, layered to sound very complex. While maintaining each production’s individuality, though, Thaione manages to keep the continuity of the EP together. “Situation Renaissance” is a remarkably unified work, held together by the textured music. In terms of lyrical content, some cuts stand out. “Fieldsongs” is an exquisite ode to an unnamed female. Thaione puts the listener right there by her side:

“She likes to play the trumpet
fill it with cold jazz
she wears her feelings on her shoulder
she got plenty ass
she suck on nicotine early in the morning like a fiend
kiss the crack of dawn slowly she annointed
watch how she undress the rhythm
she fear the revolution
she had the right to vote but didn’t make a contribution
she been in love, she been put to the test
she sings a lullaby to deal with her stress
and holds her head high”

Davis is so descriptive that much of the material on this EP isn’t very accessible. He really is a superb lyricist, a throwback to the days when emcees wove personal rhymes and overpowered us with detail. He is doing this for himself, and in the process creating something well worth exploring. “Airplane” is the best song on the EP. A heavy guitar elevates the beat above everything else around it, and Davis’ rhymes soar as well. He reaches a new plateau in describing the crises in the world. Combined with the beauty of the production, the lyrics create a song to be remembered:

“Problems get solved as the planets revolve around the sun,
but who’s paying the price to gather light?
social warfare, economic extremes
little teens being exposed to television schemes
advertising kings and queens are things to please
and feed your brain something you don’t need”

The best thing about this album is how passionate Thaione Davis is about hip-hop. Every track is uplifting, and the production fits the themes he embodies perfectly. He raps about what he sees, hears, feels, and thinks about. In this age of hip-hop, that is nothing to scoff at. Even its brevity will not be mourned, as the 8 song EP is surprisingly full. The scary thing is, he might not have even reached his potential as an artist. Check this one out, and keep watching for the full-length. I know I will. This is a throwback in the best possible way.