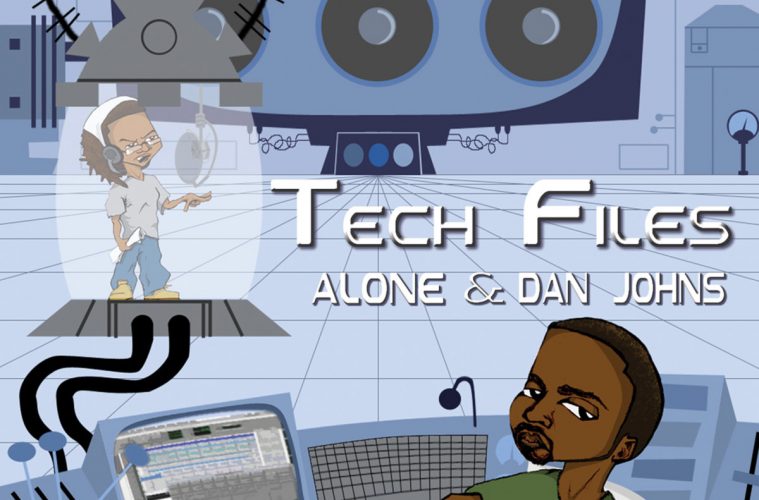 The underground rap scene is vast and encompassing. Having grown greatly in the past, it has reached areas and sub-genres previously unrecognized. Recently, it appears to be taking on characteristics that suggest that it embodies its own genre. This is mostly due to the incredibly wide variety of styles and influences. There is a niche for everyone, from local gangsta-rap to abstract. Others take the classic route, using the old-school bars and hooks style that hip-hop is most famous for.

Looking at this album’s name, you’d expect Alone and Dan Johns’ collaboration to be on some “crazy space shit that don’t even make no sense,” to quote Prodigy. The tech-themed cartoon album cover doesn’t help. In reality, though, this is just some straightforward hip-hop, coming to us directly from lovely South Carolina. Relying on production from an assortment of contributors, “Tech Files” is a tight, concise record dealing with typical rap topics, with a refreshing emphasis on love. The occasional focus on romantic feelings is a result of the emotion that both artists put into their music. They are far past the experimental stage, and are now concentrating on just putting their thoughts down on wax. Thus, while they don’t kick the most wordy or meaningful raps, the decision to write from the heart never hurt anyone. When all is said and done, those who are real about their music will stand the test of time.

“Take It Or Leave It” starts things off. Johns laces the beat for this one, a slick production with flourishes of horns on the hook. Both emcees come correct with nice, if largely forgettable, verses. What’s interesting about the opener is that nothing stands out, the music just floats in a void in your ears. It’s smooth and aurally pleasing, without anything piercing the mental in a positive or negative way.

Through the duration of the LP, the only real standouts are “Misunderstood” with Amen and “The Feel.” The latter has both emcees dropping their best work on the whole album, summing up their thoughts on their music and the industry. Backed by a melodic production from Dan Johns, the track really jumps out of the speaker. This is really the only case of a true banger, because most of the rest of the songs are proficient but not terribly memorable. Despite being the only true star of the album, it still fits within the context of the record.

There really isn’t any filler, seeing as “Tech Files” doesn’t contain much variation or experimentation. Each cut is crafted well, built with various samples, but all of the tracks come out sounding relatively similar. The result is remarkably cohesive album. If Alone and Dan Johns had made this type of album with a little more lyrical dexterity and musical assertion, it would have been great. As it stands, it still is an interesting work and a stimulating experience.

The title really is misleading. The duo kicks battle raps and love songs, with a touch of introspection from time to time. The fascinating thing about this album is that it easily could have been made in the early to late nineties. They are backed by laid-back production, they are relatively conscious, and most of all, they are positive. While not the best emcees, they seem to be rapping just for the sake of it. If Alone and Dan Johns are just doing it to get paid, they certainly don’t let it show. There is a comforting amount of passion that exudes from this record. By no stretch of the imagination is this one of the year’s best, but they’ve got their music figured out. With the proper practice, they can hone their skills and their next release will be near the top.