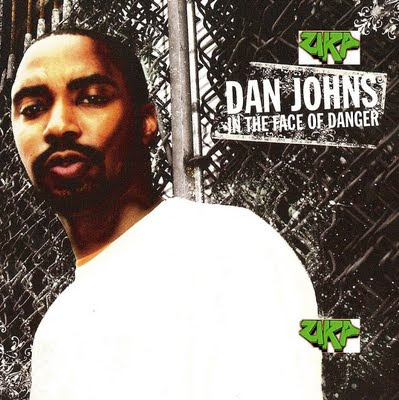 Dan Johns :: In the Face of Danger

Even though North Carolina might not be the absolute Mecca of rap music despite classic material released by Little Brother at least now it is actually on the map. Like wildfire, when great music is finally discovered outside the typically marketed areas it begins to spread and thus Dan Johns emerges from the state just South of Little Brother fame to present to true Hip Hop fans a quality release with “In the Face of Danger”.

To really nail down what is so satisfying about “In the Face of Danger” is a difficult thing to do. Dan Johns is a solid rapper with good breath control, but nothing really more. Structurally and lyrically he does not do a whole lot to separate himself from the Encore’s or Planet Asia’s of the underground scene, but sometimes if an emcee has an ear for beats and is willing to vary them that can be enough to really succeed. He does this with this LP by not relying on any one producer, rather he sticks with a core group of them that he knows that he can rely on for some heat. The scratches on several tracks also do a lot to add texture to his significant music.

Dan Johns first really makes his mark on this album with the anthem “Give Em What They Want” as he rocks over a driving joint that begs for a Pharoahe Monch verse. Not that Dan Johns does not hold his own with the following verse:

“Y’know the drama
You love to hear the never ending saga
Where rhymes are like novels
From a well-remembered author
Depicting all the tales of gunplay and drug raids
The rival crews and the dudes that are thug paid
While unfades, we just listen as the beat bangs
Throwin’ up signs created by the street gangs
Now peep game, just a few of us live it
And out of them, even less are musically gifted
Used to be if it was weak, by the rule of the street
We would ignore it but these days the bigwigs endorse it
And force feed us by the aid of mass media
The poor stay hungry while the rich get greedier
But we can change that–
Instead adding diamonds to your gold change the goals that you aim at
Then you can really lay the game flat
Because you can’t win the race if you ain’t runnin’ on the same track”

As previously mentioned none of this will really make you pull your tongue off the ground and make you hit the rewind button. However, it is certainly very well thought out and what impresses most is that the theme of Dan Johns songs do not stray midway through as most rappers tend to do. Instead, Dan Johns delivers songs that are all focused on a specific idea and hold strong to them.

“Coming from the 843” is a very strong shout-out track to his hometown, that gives South Carolina some much needed shine. It may seem like standard fare, there are whole groups that represent their home (i.e. 213). The tale is no different than most about harsh times as ghettos are the cancer of most states, so it isn’t an entirely optimistic viewpoint. The Jah Freedom beat definitely has a lot going for it between the backdrop of Dan Johns on the chorus “Dan Johns comin’ from the 8-4-3” which is complimented quite nicely by a soul cry and a heavy mechanical beat. The instrumental will conjure some comparisons to a more fully fleshed out version of “Intergalactic” by The Beastie Boys.

Dan Johns sticks to a tried and true formula that works for him and when he strays it can draw some interesting results. “To Whom…” featuring The Movement is a Del-esque intergalactic approach to his music and it does not come across as strong as some of the aforementioned tracks. The chorus sounds a bit too chanty as it overshadows the adventurous sounding music. It all fits the guest more than the featured artist. The second verse, provided by the guest, does plenty to save the track from mediocrity. Sometimes a simple song like “Need It All” is very effective. The track is a bouncy funkfest. The folksy sample that Moby would love is a delight. Most importantly, this shows the diversity of Dan Johns and proves that he can triumph on several levels and without inhibitions.

Sure, certain tracks get lost in the mix on this abundant 19-track release, but those are few in far between, squished between hotness like the chipmunk-influenced “True Definition” as the albums leaves you nodding until the curtain comes down on the experience. Unfortunately, the last two are not his best and this album in general, if properly edited, could be a near classic.

Perhaps it is time for South Carolina to get a little love in the rap music world too. If Dan Johns and his strong guests are any indication of the kind of lesser known talent the state possesses then there are great things to come. “In the Face of Danger” is an LP that does not break any new ground, yet does a great job of complimenting solid rhymes with solid beats almost throughout the entire course of the disc. Not much more can be asked of an artist and Dan Johns has delivered a beautiful sleeper album in a fairly lackluster spring of ’07.