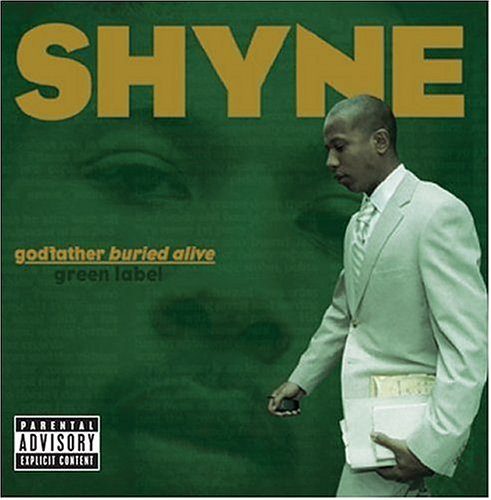 Next to Pastor Mason Betha’s reunion with the microphone, the incarcerated soldier Jamal “Shyne” Barrow is hip-hop’s most-publicized story this summer. Currently serving a prison bid after losing to the prosecution in his and P. Diddy’s club shooting trial, Shyne’s name has remained on the minds of rap community, anointing the Flatbush, Brooklyn-bred MC as an urban legend of sorts. Major labels began to court him, engaging in a bidding war that resulted in Shyne placing his Gangland imprint under the financially secure wing of Def Jam Records. One of the most anticipated releases of 2004, Godfather Buried Alive is finally here, presenting the world with new Shyne material.

Calling “Godfather Buried Alive” a “new” Shyne album is slightly misleading, though, because the majority of its featured tracks have been previously available within the mixtape circuit. Around the time Shyne Po was entering his jail cell, several mixtapes hit the streets with new songs, recorded during his trial. Previously unavailable commercially, several of these recordings are heard on Godfather Buried Alive. This is not a bad thing, however, as it seems that his trial led him to pen some of his most introspective verses. The disc’s opening number is “Quasi OG,” where Po addresses the truths behind urban plight over a moody sample of Bob Marley’s “No More Trouble.” Riding the dark backdrop, Shyne pulls no punches in his social commentary:

“I hear you muthafuckers talking, complaining
‘It’s too this, it’s too dark, it’s too violent’
Yeah, I’m what the fuck happened
when the CIA conspired and distributed crack in my environment
The roosters crowed
Man, Black people don’t own no ports or boats
So tell me, how the fuck are we getting’ all this coke?
Off of knowledge I choke, spittin’ them jewels
Hopin’ the young future soldier hear me
G.W. Bush fear me
They know I know, they wanna sweep us under rugs
Hopin’ we just keep killin’ and shooting each other with slugs”

Kanye West crafts the haunting soundtrack for “More or Less,” blending faint violins and alarming vocal wails for Shyne to spit over, while Just Blaze provides up-tempo bounce on the thumping “Here With Me.” Lifting the sample heard on Raekwon’s classic “Verbal Intercourse,” “The Gang” is a no-holds-barred lyrical exercise, with Shyne and guest Foxy Brown flexing their verbal muscles nicely. The hypnotic and menacing “Godfather” brings to mind pre-trial Shyne, delivering gritty street talk with obvious intensity:

“Oh no, big Shyne Po
Back in the muthafuckin’ heezy, fo’ sheezy
Give me a Tech that don’t jam (bang, bang)
I’m trying to jucks some more grams and work this whole thang
My mind is poisoned, corrupted and diseased
Three-hundred and sixty keys, money make the world spin
I’ll make your chest smoke, having your mother singing hymns
With particles of your brains all on your Tims”

The deepest moment on Godfather Buried Alive comes in the form of “Martyr,” a heartfelt brainstorming session where Shyne tugs at emotions while opening up both eyes and ears to his negative yet honest points of view. An avant-garde instrumental inspires his thoughts, touching on life, death, injustice, and other issues that Shyne sees problems with:

“Live every day like it’s my last, waiting to meet my niggas that passed
Alas, I can meet Christ and ask him, “Why the fuck you died on the cross?’
Cuz look at all these stupid muthafuckers, they still lost
Holla at Malcolm, see what it was like to fight
for civil rights on nights he thought he would die
What did he do? Did he grab a gun and bust a shot?
Get on my knees, praise Big and go fuck wit ‘Pac
Find out, did he really take five shots
Ask him, who shot ya? Was it the Feds?
Couldn’t have been Big Poppa, Brooklyn niggas aint bred like that
Ask Martin, “Why the fuck you ain’t fight back?'”

In moves that seem more record label inspired than Shyne approved, Godfather Buried Alive is tainted by three unnecessary selections. “Jimmy Choo” is an uninspired Murder Inc. song disguised as a Shyne offering, complete with an Ashanti-delivered hook and a beat that even Ja Rule would reject. “Behind The Walls (West Coast Gangsta Mix)” is a pointless remix of the Kurupt and Nate Dogg track found on the Oz Soundtrack, while “Shyne” sports a strong violin-driven Swizz Beatz creation that would be welcome if hadn’t been included on the producer’s 2002 G.H.E.T.T.O. Stories album.

With all of the hype surrounding it, Godfather Buried Alive is a worthy listen, showcasing Shyne’s unfiltered honesty in its uncompromising form. Even if the songs aren’t completely fresh, the overall product is strong enough to make his followers heavily await Shyne’s release from behind bars, whenever that may be. Rather than blatantly attacking Diddy and endlessly analyzing his trial, Shyne ponders larger aspects of reality, dropping several bars that should ring once-rusty bells in the minds of listeners.