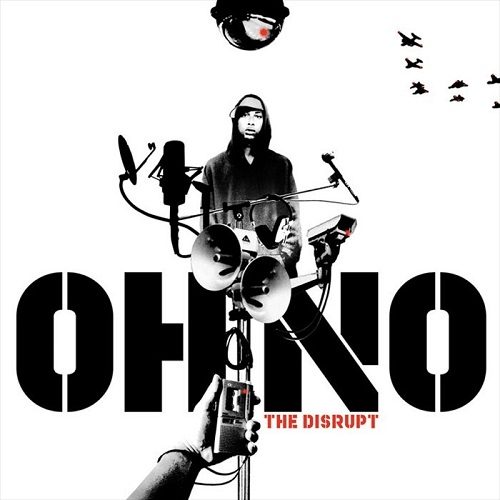 Oh No :: The Disrupt

Being tapped for the second of two featured hip-hop releases on a prominent indy label sets expectations pretty high. The pressure starts to mount even more when the first of these is deemed classic in many circles. Add to that the fact that Oh No’s older brother, Madlib, was half of the Madvillain team that produced this classic, and there are some serious hopes for his following LP.

There are a few fundamental differences between the two brothers. First off, the younger one can’t quite lace a track like his older counterpart. This isn’t anything to cry about of course, especially since we get a taste of both brothers on the boards here. The second is that Oh No is a living, breathing emcee. Undistorted and completely clear, he can clearly do one thing better than his bro. He raps like every bar is his last.

As I just proved above, placing your older, more accomplished brother on your record is just begging for comparisons. Oh No must be pretty confident in his skills, because the comparisons will come. There are several tracks produced by Madlib. Oh No, who provides the music for most of the others, actually shares a remarkably similar ear for samples as his brother. Each cut is crafted over sporadically chosen, often odd musical snippets. In this sense, it is remarkably similar to “Madvillainy.” Unfortunately, even on the joints that Madlib crafts, it doesn’t measure up to the zany, Bomb Squad-esque density of its predecessor.

Nevertheless, “The Disrupt” is an album of pretty high quality. “I’m Here” serves as the intro, and Oh No’s own beat is incredibly complex and catchy. Oh No reveals himself through his first few bars:

“Son of the dopest soul singers
Nephew to the great jazz trumpeter
Brother of the illest beat conductors, Madlib
But don’t judge me by it
I’m like weed, try it
If you don’t like it – fuck it
‘Cause everybody can’t be disrupted”

The first thing you’ll notice is that he sounds very comfortable on the mic. He’s got a feel for this kind of thing. Even when what he says isn’t notable, his delivery forces it on the listener, and it’s hard not to like his confidence.

“Right Now” is the first real taste we get of Oh No, though the track is provided by Madlib. The beat is vintage Madlib, and Oh No exhibits a breathtaking flow. The follow-up, “Move,” has a haunting organ sample, provided by J Dilla, one of the two tracks on “The Disrupt” that aren’t from the siblings. Oh No continues his rampage on the mic as well.

“Stomp That V. 2” is another Madlib production, but while the beat first sounds intriguing, it is ultimately sparse and lifeless. Oh No comes correct again, but it’s hard to feel a song that doesn’t have a bumping beat. This ultimately becomes the largest deficiency on “The Disrupt.” Each track is well crafted, but given the siblings’ offbeat production style, when they miss what is left is an odd, jerky beat that is hard to properly flow over.

Lyrically, Oh No is all over the place. He doesn’t have a very distinctive voice, but his delivery is so frenetic that he commands energy whenever he flows. No new or innovative topics are explored on “The Disrupt,” but he has enough talent to avoid monotony. Due to the manner in which he raps, the entire album has a raw, untamed quality. This is furthered by the nature of the production, which is similarly frenetic.

The biggest problem with “The Disrupt” is that there doesn’t seem to be a pattern to the madness. While the method to “Madvillainy” could be deciphered after several listens, “The Disrupt” seems to just be a collection of tracks with the same emcee. Each beat is crazy in its own way, but that’s it. For the most part, the production isn’t terribly catchy. There are even a few songs that don’t gel at all from a musical standpoint. The replay value is seriously altered when there are a handful of joints that aren’t appealing on a musical level. Oh No and Madlib’s work really is proficient, but I guess I just expected a bit more from this family. All of the elements are there, they just don’t mix quite right.

Regardless of whether “The Disrupt” measures up to its predecessor, it still is a very good record. Oh No is the star, as he easily outshines the production with his rapid-fire lyrics. There are several noteworthy musical contributions as well, and the result when both parts come together is inspiring. Given the personnel involved, it could have been great, but it stands as a solid first attempt, and a fairly worthy successor to “Madvillainy.”