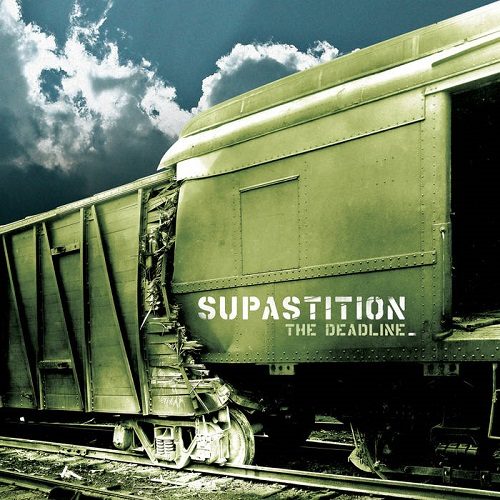 Hailing from North Carolina, up-and-coming rapper Supastition is following in the anti-stereotypical path of fellow Southern representatives Little Brother. Rather than relying on flashy techniques and club-smashing anthems, Supastition is taking the old-fashioned approach, filling his music with pure honesty, backed by a traditional flow and vintage production. While his debut release “Seven Years of Bad Luck” achieved regional success after it’s independent release, Supastition didn’t truly enter the minds of knowledgeable hip-hop listeners until his appearance on the recent “Okayplayer True Notes Vol. 1.” His contribution, “The Williams,” produced by overseas production expert Nicolay, stood out amongst tracks by the likes of The Roots, Skillz, Jean Grae, and Dilated Peoples.

In order to build anticipation for his February 2005 full-length disc, “Chain Letters,” Supastition has put together “The Deadline.” The Deadline is a tight ten-song effort highlighting his impressive lyrical abilities. “Deadline Intro” opens things up, with our host riding a funky blend of horn blasts and melodic percussion, leading into the incredible “Boombox.” Over Illmind’s solid piano arrangement, Supastition shows and proves in old-school fashion, firing battle raps and self-confidence boosters with ease:

“Now I respect a few rappers, but I know there is no equal
My flow is so lethal it gags and chokes people
Whether legend or has been, the best get floored
Stomp you and your producer, and whoever press record
I’m dead serious, so I fiend for legendary status
It seems that niggas only aim to be better than average
And that’s pathetic itself, medical health
when every other bar spit I try to better myself
Said it myself, the game and fame, man I’m gon’ love it
But I trying to water down my sound to go Banana Republic”

“Homecoming” finds Supastition delivering homespun narratives with a genuine feel, while the mellow “Soul Searching” will put minds at ease with its laidback nature. M-Phazes gives Supastition Pete Rock-inspired jazz to ponder his past choices on “If I Knew,” and “Adrenaline” has him kicking rhymes with an abrasive edge, dropping lines like:

“You want to make beef with Supa, don’t gamble with your life
The only time I shake hands is when I’m handlin’ the dice
Y’all amateurs compare to what I write (man let it go)
I’ll beat the dead horse like I don’t care for animal rights
May lightning strike a nigga down if I’m frontin’
They trying to decide if I sold more records or Rewind buttons”

Supastition is well-rounded MC, with proven capabilities in both conceptual fare and straightforward lyrical barrages. “The Deadline” serves as a successful buzz-builder for “Chain Letters,” giving just the right amount of heat, but not burning ears enough to suffice anticipation. With appearance from Little Brother and Apathy, and production from 9th Wonder and Jake One, Chain Letters promises to be an underground favorite. Until its street date, though, The Deadline should hold over rap heads nicely. Remember the name Supastition, because it’s only a matter of time before his authentic brand of hip-hop is broadcast to larger audiences.