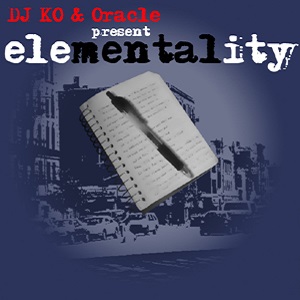 Let’s face it, hip-hop is fairly hit or miss these days. Whether it’s underground backback rap for the subterranean fans, or commercially glossy gangsta hop filled with unwarranted guest verses and big name producers, good music is still good music, and bad music is just, wellâ€¦.bad. With that in mind, fans have turned towards mixtapes and compilations to get their fix. At a cheaper price than regular cds, and sometimes even given away for free, mixtapes are where fans can get that real shit without all the red tape involved.

The problem with mixtapes and compilations is that everyone and their mother puts one out, and it’s hard to sift through the garbage to find the good ones. Rutger’s college radio jack DJ KO and Oracle make their second foray into the market with “Elementality,” a 25-track kaleidoscope of underground-influenced music from some fairly unknowns (outside of internet fan sites and chatrooms), and occasional guest spots from less-than-stellar-but-still-huge-among-the-backpack crowd rappers.

Over producer Analogic’s straight 4/4 drum hits and chopped “Yeah,” and “Ooh,” vocal samples, “Love and Revolution” finds Silent Knight offering his take on just that. Knight, with a uniquely polished flow confidently spits: “Leisurely desensitized so we don’t take notice/ so then we don’t take action, so then we don’t take what they owe us/ which is more than 40 acres and a mule to blacks/ or an apology for sending troops to Iraq.” Mphazes’ swinging boom bap comes to the aid of Raks One on “The Run Around,” where the filtered baseline and wind chimes accentuate Raks witty lines like, “I’m hot and unsigned, my blood boils/ been shot down so many times I’m surprised I ain’t struck oil.” Kev Brown’s crispy snares and piano loop work well with Cy Young’s slightly gruff voice on “Good Times,” and Reef the Lost Cause makes a strong case for himself with his rapid-fire delivery over Illmind’s up tempo atmospheric instrumental on “Get Lost.”

It’s right around the time when Reef starts turning your head when “Elementality” starts losing steam. In particular Forge and Amen’s “Legend Killer” is a weak attempt at professing love for the hip-hop culture. Though the beat’s vocal samples and string-laden backdrop provide an ample instrumental, the song comes off boring and uninspired, even given the subject matter. The rappers are just not engaging enough to hold the listener’s interest long enough to hear their hip-hop stories. El Da Sensei pops in for a freestyle, and though it starts off as a written rhyme, it clearly becomes a real freestyle. That will earn this compilation some culture points, but regardless, the actual rhymes are nothing spectacular, and all in all, it might have served “Elementality” better if it had been left on the cutting room floor. Then, on “Push Weight,” an obscure emcee by the name of Can U spits multi-syllabic rhymes with an all too nerdy voice, and the backpacker level of this mixtape gets subsequently stretched to the limits.

By this point, the listener has probably grown tired of hearing the same exact drum pattern and tempo, and it’s clear that all the heat on “Elementality” is present in the first ten tracks or so. Though there are many emcees on this compilation, it’s unfortunate that the talent pool is so poor, because the compilation gets bogged down with boring rhymes and beats to point where you really just don’t feel like listening anymore. And that will ultimately cause you to miss out on K Slack’s southern bounce-influenced “Right Now,” where the supposed lyrical neophyte spits with an aggressive double time flow, and easily provides one of the standout tracks on the album. But somehow, this song ends up last on this 25-track underground odyssey. Not smart a smart move for those of us whose fingers are permanently glued to the skip button on our cd players.