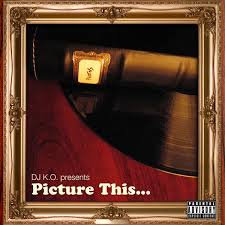 DJ K.O. does virtually the same thing as DJ Khaled on “We Global”; he doesn’t produce the beats and scratches are rarely heard, but he is the liaison between the rappers and beat makers. So, in this case, you could consider “Picture This…” the underground equivalent of Khaled’s latestâ€”without any high-pitched “we the best!” proclamations.

I’m consciously beating the Khaled horse dead, but, K.O.’s effort is similarly global in its line-up. Detroit wordsmiths Elzhi and Royce Da 5’9″ are found alongside North Carolina’s Supastition while Toronto femcee Eternia raps with the DMV’s SoulStice on “It’s Time.” What’s rather apparent from the guest list is that Detroit, North Carolina and the DMV are quickly becoming the prominent hotbeds of underground hip hop.

That is not to say that “Picture This…” is centralized in smaller market cities, or limited to up and coming rappers. Edo G, Diamond D and Buckwild team up for a neo-classic East Coast record, with Carolina’s Kaze holding his own as well. As would be the case fifteen years ago, though, it’s the Bostonian Edo G who steals the show:

Along with these legends more than proving their relevance are O.C. and Masta Ace, who compares rapping to “sleeping with the enemy” on the Analogic produced “Ladder of Success.” Still, it’s Phonte who rips the track with his opening bars: “It’s Phonte and K.O., delivering that new born shit, this verse is a day old // so handle with care and keep ya hands in the air when I’m on stage, hand in my face doin’ the Yayo.” Analogic also contributes a simple but effective sample of Donny Hathaway’s “Someday We’ll All Be Free” on “Someday,” but is ultimately overused. His five beats easily outweigh any other producer’s contribution and become staler as the record progresses.

While there are no tracks on the album I’d consider bad, this repetition of production mars the second half of the album before Black Milk provides a solid closing with his formulated chopped up vocal samples and live drum combo. Emilio Rojas (formerly Raks One) outshines the more popular Skyzoo and Median, presenting his own take on the H.E.R. metaphor.

The flat out best track on the album is however from the most predictable suspects. Released some months ago online, “The Best to Do It” is still fresh as hell. M-Phazes offers a chaotic amalgam of “oooohs” and guitar strings while DJ K.O. scratches up boasts from Royce Da 5’9″, Elzhi and Supastition. Each emcee makes a reasonable case for the title of the song applying to them, but none better than the Slum Village emcee:

“Get your weight up, and quit mean muggin’ niggas
Like you wit ya sister and she just fit a A cup
I woulda smashed you before my mustache grew
It’s like you crash when you pass through to get ya gas fuel
The ladies say I got a way with words, but they don’t know the half
I write a blind man a photograph
Subliminal, any imbecile in general
Can suck the identical genitals from the general”

“Picture This…” may be far from perfect, but is nonetheless a refreshing alternative of recent commercial attempts at gathering the best emcees and producers.