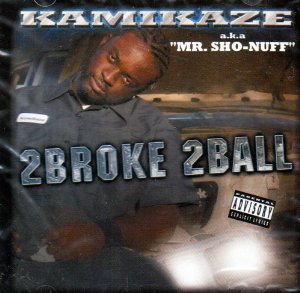 By now the hip-hop world should be more than familiar with Mississippi’s resident super-rapper David Banner. And while Banner has done his best to put his home-state on the map, most people still sleep on the crooked letter state in major way. Case in point, Kamikaze has dropped his album “2 Broke 2 Ball” with little to no fanfare. What’s amazing about this is the fact that Kamikaze isn’t just any Mississippi rapper, but is arguably the state’s illest MC. Turn back the clock a few years and you would have found Kamikaze and David Banner teamed up as the super-group Crooked Lettaz, who dropped the southern classic “Grey Skies.” Since then the group has peacefully separated and each member has pursued his own solo career. And while Banner has had great success as a rapper/producer, Kamikaze has been patiently waiting for his time to blow.

The album start’s off with Kamikaze introducing us to his alter-ego, Mr. Shonuff. Over a dark and thumping bass track, Kamikaze tells us what being 2 broke 2 ball is all about:

“Now with authority I steps in to announce my presence
Shonuff has arrived, the savior to your paupers and peasants
If you’ll excuse my behavior lord, this ain’t goin’ be pleasant
Cuz this is Missippi’s finest and I’ve come to give blessings
I’m too nice but for the right price I’ll give you a blessing
You said this industry’s fucked up, it’s a recession
It’s cuz these niggas rap about they chain
They rap about they range, they rap about they caine
They rap like if they don’t possess a brain
But see I live and die for po’ niggas who don’t possess a thing
I’m too broke and I could never ball, my bills got all my change”

Immediately following is “U Ain’t Heard,” a crunk club track with so much energy that it would sound right at home in any club across the south. And just so you don’t confuse Kamikaze for an imitator of Atl’s signature sound, one must only look to Crooked Lettaz’ “Get Crunk” to know these boys were down from day one. Kamikaze’s claim of being too broke to ball is further solidified by the hustler’s anthem “Same Old Clothes.” Instead of bragging about how much money his hustle has earned him, Kamikaze keeps it real when he says “I have the same old clothes I had on yesterday, I’m just a block-burner out here trying to get paid.” “Round Here” is an ode to his southern lifestyle and is appropriately laidback and energetic all at the same time. Kamikaze makes sure to shout out both the country and the city , making sure the entire south feels the love from this feel-good track.

Nappy Roots makes an unexpected and welcome appearance on the sinister “Get Em Back.” A flute sample is more than enough to set the mood for this track, best described as Southern fight music. Always sure to keep it keep and never monotonous, Kamikaze follows this track with the painfully honest “Loser.” Here Kamikaze details those bad-luck times we all go through:

“It’s like having a day off and it’s pouring rain
It’s like betting on the falcons and Vick miss the game
Boy it’s a shame how I bust my ass from 9-5
And I’m still broke, by the 10th I give off bad vibes
That’s why I have to put my credit in my momma’s name
The last one chosen every Sunday at the pick up game
It’s like we at the hottest club and they closed the door
Or fucked the neighborhood slut and the baby’s yours”

The beat is a mix of synths and guitars that form the perfect blues-like background for Kamikaze. The funk-inspired “Dope” calls out those who claim to be dope-boys both literally and on the track. Once again Kamikaze takes a generic concept and finds a way to flip it and keep it fresh. “Hustlin'” is another anthem that anyone can relate to. Rather than speak about the stereotypical hustle of today’s gangsta rap, Kamikaze represents for everyone:

Cuz if you’re spending hours on the block – You hustlin’
Slangin’ stacks trying to look out for them cops – You hustlin’
Babysitting, doing nails on the side – You hustlin’
Going to school while you bumming for a ride – Oh Yeah – You Hustlin'”

Tracks like these show that Kamikaze truly has love for his whole hood, from students to gangsters. It’s hard to find even one bad track on “2 Broke 2 Ball.” Kamikaze blends hardcore tracks like “Hee Haw” with heartfelt and honest tracks like “Change” in a way few rappers can. Even more outstanding is how well he handles all types of songs. The album really conveys what life for the everyday man is all about; Hustling during the week just to get by, and letting loose on the weekends to escape stressful times. The title track sums up this feeling, as it is a club track dedicated to those who don’t have enough money to floss in the club as much as they would like. After “2 Broke 2 Ball” comes “So Cool,” an old school inspired track that starts off with Kamikaze shouting out Jam Master Jay and even includes a reference to “Sucker M.C.’s.” The album ends with “Shine,” a song that while chronicling some of the tougher times in Kamikaze’s life still leaves hope for a new day.

Maybe Kamikaze is so skilled at representing for all walks of life because he embodies a little bit of everything himself. On “I Apologize” he proclaims, “It’s kinds sad that I’m a college grad, and still get mad I’m still at the pad.” For fans of Crooked Lettaz, it isn’t news that both Kamikaze and David Banner are no strangers to formal education. This unique perspective (amongst rappers at least) allows Kamikaze to have insight on both hustling the illegal and legal way. His ability to see the similarities between these two seemingly opposing lifestyles lets Kamikaze appeal to anyone who has ever struggled or faced hardship in life.

“2 Broke 2 Ball” SHOULD be the album to make Kamikaze a household name, if not nationwide then at least through out the south, but sadly it seems Kamikaze will have to wait at least a little bit longer. Don’t get it confused though, Kamikaze does nothing wrong. The music on the album is great from start to finish. It captures the essence of the south through the perfect mix of high-energy crunk music and more mellow funk, blues, and folk music. Lyrically, Kamikaze was always the stronger of the two MCs in Crooked Lettaz, a distinction that is quite a compliment considering the other MC is David Banner. Kamikaze continues his tradition of dope lyrics and storytelling on “2 Broke 2 Ball.” More importantly, Kamikaze represents for all walks of life on his album. Most rappers today claim to represent their hood and keep it real, but Kamikaze is one of a select few who actually do so. He isn’t afraid to admit that at times he is “2 Broke 2 Ball,” as most of us are at one point or another. The only thing that will keep this album from achieving the success it deserves is the lack of promotion. I stumbled upon it by accident, and I consider myself a big Crooked Lettaz fan. So if you are lucky enough to have a mom and pops store that keeps its ear to the streets, pick up this album, you won’t be disappointed. Otherwise, you’ll just have to wait and hope major record labels wake up and realize that although most of us are too broke to ball, we’re not too broke to support quality artists such as Kamikaze.