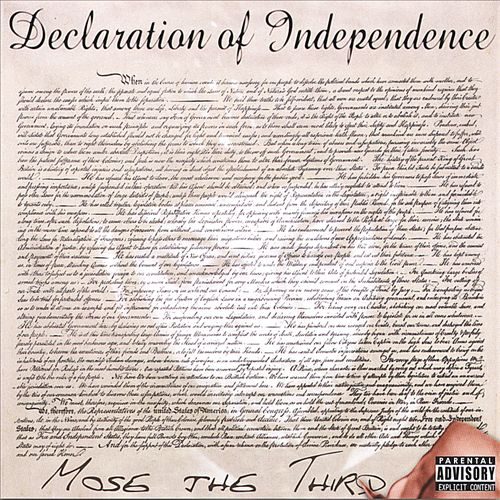 Mose the Third :: Declaration of Independence

Hailing from the Windy City and boasting a resume that includes appearances on Def Poetry Jam Radio, Mose The Third declares that its “time for him to be next on the mic for Chicago and national hip-hop mic controllers.” This lofty claim leaves the listener expecting great things from this relatively unknown Chicago MC. Setting high goals is by no means discouraged for anyone, but ultimately Mose delivers a product that doesn’t meet these expectations. Instead, “Declaration of Independence” leaves the listener with the impression that while Mose may be a very talented and positive individual, rapping may not be one of his greater strengths.

Musically the album is solid, with varied head nodding beats that appeal more towards the jazzy-mellow genre of underground rap, but do include enough changes of pace to appeal to a wider audience. “Mind Music” has an almost electronic feel thanks to V-TraxXx’s synthesizer driven melody. “Fists (Up Again)” is reminiscent of old school funk with a small taste of disco flavor, and while meant to be a club track, has enough soul to appeal to even hard-nosed hip-hop purists. V-TraxXx returns on “Hiphop Don’t Stop” but fails to connect on this swing as the electronic sound on this track sounds uninspired and unenergetic. DJ Emmaculate resurrects the soulful style found on “Fists (Up Again)” on “Come Alive With Me” where the beat reflects the title of the song very well with a refreshing mid-tempo track. Wyshmaster really flips the script with “Club Theme” with a guitar-laden club beat that is actually pretty good. “Destiny” is another dope beat by DJ Emmaculate with a hard hitting and bass heavy beat that is the perfect backdrop for J.U.I.C.E. to drop his verse on. Overall the producers come through with their part on this CD, with only a few tracks that miss the mark and enough good beats to make up for it.

Lyrically the album is outstanding, but that does not translate to an outstanding performance by Mose. On paper, it is clear that Mose is a very talented and positive lyricist. The whole vibe one gets from Mose is that he is indeed a very dedicated artist and does have a profound love for music. The liner notes contain personal notes regarding the motivation behind each track, a rare thing nowadays, especially considering the sincerity found in those notes. The topics Mose chooses to address are relevant and refreshing, ranging from his love for hip-hop to the personal experiences found on “I Know I Can Change” and “Problems.” His actual lyrics are also on point throughout most of the songs as Mose can convey his emotions through his lyrics very well. The biggest problem with the album and with Mose as an emcee is the delivery. His lyrics on paper do not translate very well to the tracks. At times his flow is a bit elementary and his rhyme scheme is too predictable. While not too bad as to completely overshadow the lyrical content, his flow still detracts from the end product. Other times Mose seems to struggle to keep up with the beat or sounds a bit awkward over the faster tempos found on the album. There is definitely potential for improvement, but from this album Mose comes off as a good lyricist, a good poet, but not a good emcee.

When Mose does stick to a slam poetry approach in presenting his lyrics, such as he does on “Realize,” his full talent as a writer and poet definitely shines. But otherwise, Mose comes off as a poet trying to make the transition to an emcee. It is a difficult transition for anyone to make and Mose has not yet finished it. This is not to say Mose may not improve in the future, but for now “Declaration of Independence” may be a tough sell. The music is solid and enjoyable, and the lyrical content is refreshing and positive, but the delivery keeps “Declaration of Independence” from being as dope and as fresh as it could have been.