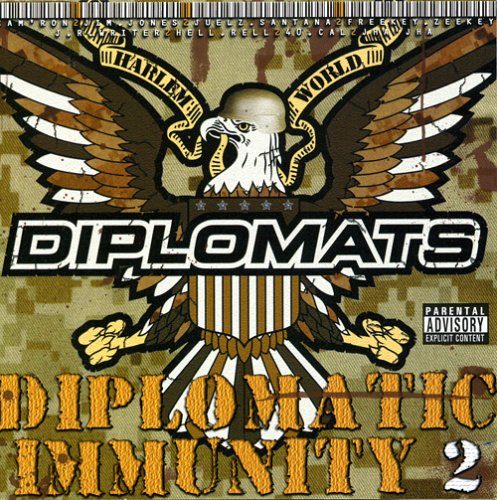 To many, the words “Dip Set” automatically conjure up outrageous images of undersized tots in oversized clothing, befuddled teenagers who rejoice in all things large and pink (or rather, purple this year)- t-shirts, jeans, fitted hats, chains, egos. In many senses, the phenomenon of the Diplomats seems to have eclipsed rap itself, as legions of rabid miscreants, all donning Footlocker t-shirts long enough to be deemed as maternity wear threaten to lay siege on the world as we know it, eager to maim (or â€˜goonie google’ in dip-set speak) anybody in their path. True enough, the Diplomats are quite possibly the most worrisome phenomenon in rap today, their incomprehensible slang and reprehensible fashion sense erecting a new standard for silliness in hip-hop.

Yet, through all the impermeable gibberish and over-the-top jewelry, the Diplomats have also been responsible for some of the most irresistible music in recent memory. With Cam’ron forming the lyrical backbone and street-proven ability of the group, corporals Juelz and Jim Jones compensate for technical competency with sincere delivery and irrepressible charisma, colouring their thugged-out rhetoric with equal parts heartfelt conviction and humour. I thoroughly enjoyed the first installment of Diplomatic Immunity, which married the charming, arresting styles of the three emcees with the madcap hypeman tomfoolery of Freaky Zeeky (a chubbier, blooded-out version of Flava Flav) and some of the most bombastic, forceful production to ever feature a chipmunk voice courtesy of the Heatmakerz and Natural Elements alumni Charlemagne. Therefore, it was with eager anticipation that I put this record in my stereo, expecting a fun listen chock-full of drunken, rambling verses and pummelling, subwoofer-blowing tracks.

One thing you need to note coming into this record: JR WRITER IS A MONSTER. While my better instincts had lead me to writer JR off as a novelty, a gimmicky rapper doing the A-Plus to Cam’s Canibus, he has most certainly made me look quite the fool on this outing. Over the propulsive, speaker-decimating thump of opener “Stop N Go,” JR absolutely mangles the microphone, spewing bar after bar of molten magma with merciless efficiency. Fittingly, Cam’s appearance at the end of the track shows just how much JR Writer has eclipsed his mentor- while Cam’s verse is absolutely stellar, his flow appears lethargic and unenthused when placed next to the ravenous young upstart. Juelz offers a solo gem with the following track, “S.A.N.T.A.N.A.,” which takes the clapping snares and throbbing bass of “Y’all Some Dead…,” throwing in some slightly irritating chipmunk voices on the hook and peppering everything with a frothy serving of Juelz’ assured, endearing delivery.

One thing that should be apparent to any Dip Set connoisseurs is the fact that there are a number of old standards included here. While some are more than welcome (the caustic Mase diss “Take Em To Church”), some are slightly off-putting, such as the “Purple Haze” castaways “Dead Mutha…”/ “The Bigger Picture” and the horrifying pseudo-patois shuffle of “Dutty Clap” with London’s Dip-Set affiliates S.A.S.

Another striking feature is the addition of new members- Jha Jha, Bugs and 40 Cal. While I can earnestly say that I was excited about these additions, I can now assert without any reasonable doubt that the usually astute Dip Set academy that spawned Un Kasa, Agallah and Taj Mahal have groomed some absolute stinkers here. Jha Jha mars the quasi-crunk of “Get From Round Me” with her misguided La Chat impersonations, 40 Cal’s self-titled solo joint is a disposable, hopelessly stale guns, drugs and punchlines pile of mulch with an atrocious hook, Bugs wastes a perfectly decent, weeping Heatmakerz track with his incomprehensible drivel on “Melalin.” These three emcees simply lack the charisma and character that Juelz, Jim, JR and Cam possess in droves- Jha Jha is an appalling facsimile of several emcees who were never remarkable to begin with, 40 Cal sounds like the dude you hear rapping about the same stuff on your street corner, Bugs appears to have no concept about coherence or comprehensibility, his flow a random mish-mash of syllables that run into each other with mush-mouthed clumsiness. Imagine Jim Jones if he had a speech impediment and was attempting to rap with food in his mouth, and you’re halfway there. I for one would have enjoyed more Hell Rell and JR solos, a McGruff guest shot here and there (where on earth is dude?) and no contributions from these three.

The consensus regarding this record amongst friends who have heard it is that it feels too slipshod, too haphazard to be termed an album, bearing a random feel that is more akin to a mixtape. I can’t say I disagree with this- the track sequencing can get somewhat random and disjointed, particularly the awkward segue of “Dutty Clap” and the two-step-gone-terribly-wrong excursion of “Wanna Be Your Lady” with newbie Roc signee Nicole Wray. A far cry from the cohesiveness of “Diplomatic Immunity,” this album does at times even feel less immediate and compelling than even the Diplomats Mixtapes. As forceful as “S.A.N.T.A.N.A.” is, it lacks the gutwrenching urgency found on the best moments of “From Me 2 U.” Even the album’s strongest offerings do not approach the heights of “Ground Zero” and “Real N’z.” As a whole, this album feels like a half-hearted attempt at replicating past glories, yet at the same time it is painfully evident that the Diplomats have lost sight of what made their first record so compelling- the lyrical genius courtesy of Cam, which walked the fine line between laughable and quotable, the sparkling charm of Juelz, the heart-stopping desperation of Jim Jones, whose sense of urgency bled all over each track with sincere aplomb. Even the beats don’t seize you by the jugular in quite the same way, something that isn’t helped by the fact that Diplomats aficionados have had certain tracks in rotation for a good year now- these tracks simply don’t have the same ferocious appeal the 25th time around.

Ultimately however, as half-baked as this effort may appear in comparison to the more accomplished “Diplomatic Immunity,” there is a conviction and sincerity to everything Diplomats-related that truly has to be commended. From their music to their videos, there is a distinct air of humour, one that almost borders on self-deprecation, that surrounds everything they do- it is apparent that they refuse to take themselves too seriously, that they truly enjoy creating music and establishing the Diplomats as a brand, as an alcohol line, as a subcultural force to be reckoned with. To even the most casual observer of rap, the Diplomats have become a ubiquitous influence in rap, welcoming attention in any form imaginable- positive or harshly negative, and unlike similarly-minded outfits like G-Unit, their thuggier-than-thou aura is tempered by a genuine good-natured ingÃ©nue that makes them that much more loveable and believable. That is, of course, unless you’re a jaded asshole who has nothing to do but whine about how hip-hop is dead.

To this reviewer, it is apparent that Dip Set do not aspire to be anything other than Dip Set, and that integrity speaks volumes in an industry that becomes more cosmetic and superficial by the minute. This may not be essential listening, and it may not even begin to approach the heights of the first volume, but surrender yourself to the sounds within, drop your irrational biases against these Harlemites, and you may find yourself enjoying it far more than you had previously expected. For Diplomats acolytes however, you’d be much better off looking into their new mixtape or the new Jim Jones record.