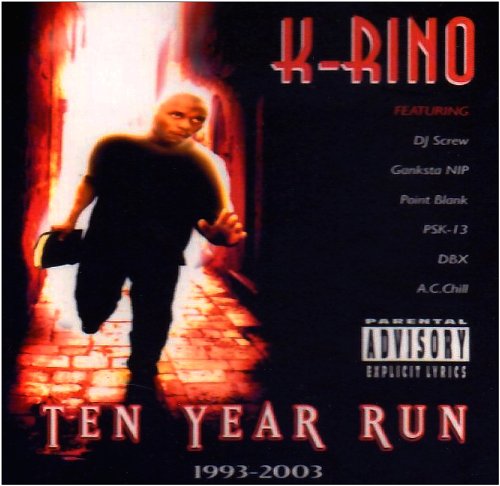 I’ve heard that K-Rino is Scarface’s favorite rapper, even though I have yet to find the interview this information came from. I’m left with two options, dismiss it as a very clever marketing ploy or take it as the unsubstantiated truth, after listening to “Ten Year Run” I am inclined to believe the latter.

Though Texas rappers only began to gain mainstream exposure in the late 1980s and early 1990s with acts like UGK, The Geto Boys, and The D.O.C. ( Yes, the funky one is a Texas native), K-Rino has been honing his mic skills since 1984. And though he has not released many albums in the twenty years since he first started rapping, the oddly titled “Ten Year Run” is meant to be a testament to his career.

K-Rino’s experience and knowledge of the game is evident in this compilation as he commands attention and rips the mic track after track. While you’ll find a fair amount of street tales on this album, a reflection of K-Rino’s experience in Houston’s notorious Southside, K-Rino does more than threaten you or brag on the mic. On “Ghetto A.B.C.’s” K-Rino flips the alphabet in a simple, but entertaining way:

“A is for the ammo
B is for the blood
C is for them crazy brothers shootin at the club
D is for the dope game
E is for the end
F is for the fool that’ll fuck over his friend
G is for the gangsters
H is for the hood
I means I’m ignorant, but thinkin it’s all good
J is for them jackers
K is for the kill
L is for the laid out victims of the steel
M is for the money
N I need it fast
O is what you say, when them bullets hit yo ass
P is for the pimps
Q is for the queens
R is for the rims on your ride when it’s clean
S is for that South Park
T is for the Trae
U better run when them killers come your way
V is for my victim
W is wake
X marks the spot on whatever I’ma take
Y is for these youngsters
Z cuz it’s a zoo
God kill America, the red, white, and blue”

“I don’t brag about cars and I don’t brag about clothes
I don’t call women tramps, sluts, bitches or hoes
I don’t sell out, kiss ass, or ball like a kid
But I bet the radio would bump my shit if I did
You see, I’m standing deep up in your face today
The realest lyricist droppin attomic verses ’till you waste away
Suckaz are tame when I spit the game
Aggravated narrarator, metamorphisize into a human flame
Battles intense, ??never straddle the fence??
The radio hating me cuz I chose knowledge over nonsense
It’s K-Rino in case you don’t recognize the tone
I terrorize your zone, while my foe dies alone
I do this well, while y’all scared to fail
Puttin a 100 different fools on your shit to try and make it sell
Killaz I’m draftin, cuttin snitches in half when
Agitated I’m smashin, do it sound like I’m laughin?
At random, droppin miscellaneous destruction
Causin opponents to suffer spontaneous combustion
Fraud rapper found dead, bucked by the song capper
His tombstone read “He Fucked With the Wrong Rapper”

Other songs more in tune with Texas’ laidback rap style include “The Hardest Click” featuring K-Rino’s South Park Coalition, a crew of rappers he’s helped come up in the game. “Suicide Note” is a deeper track addressing the issues that can come up when one isn’t as successful as one may have thought. The beat features a slick violin sample that helps set the mood and an intro that emphasizes just how quickly and how much things can change by featuring a child proclaiming “I am magnificent, I am special and unique, beautiful and dynamic, the best that I can beâ€¦” The contrast between the child’s innocence and hope and K-Rino’s depression is chilling.

Each track on this collection could be analyzed and would reveal only good things about K-Rino. He is a highly talented rapper and has been slept on in a major way, not only nationwide but even in Texas. No matter what your flavor may be, “Ten Year Run” has something for everyone. Rino is versatile and while he reps his hometown to the fullest, he has fun with hip-hop, and he can tear a rapper a new one with his lyrics. Even if he isn’t â€˜Face’s favorite rapper, one listen to “Ten Year Run” may have him creeping towards the top of your list.