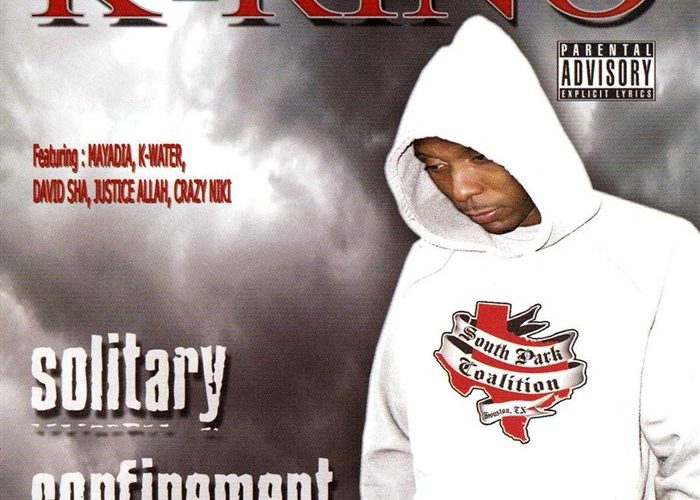 Conceptual music is often missing in the hip-hop scene. When an artist does decide to make a concept song or album, they often make such a big deal about it the music loses its luster. His concept songs are just one of many reasons K-Rino has remained a staple of the underground rap scene throughout his career. Each album is sure to contain at least one song that will have you hitting the replay button more than one time. “Solitary Confinement” is no different. Yet, even when you think you know what to expect from K-Rino, the man still hits you with surprises when you pop in the CD. His last album, “Blood Doctrine,” was a fierce and focused foray into the political and social situation K-Rino faces every day. “Solitary Confinement” was advertised as a darker album by K-Rino, but rather than giving us “Blood Doctrine 2,” he delivers an album that is at the same time darker and more balanced than “Blood Doctrine.”

After a tongue in cheek introduction, K-Rino gets down to business right away with the searing social commentary on “Soul Merchants:”

“We used to wake up fiending
To write words in between the paper’s lines that had meaning
Seeking hood recognition, fighting for position
Being strengthened by the competition
But once the game started growing
Struggles came without us knowing and the pain started showing
We took pride in intellect and skill
Now you gotta have some sex appeal to get a record deal
And if you did come correct they soon
Made you change your tune once they called you in that special room
They pimping you, but you too weak to fight
Without your manhood I don’t see how you can sleep at night
We the ones they tried to ruin
When we started spewing facts on what the government was doing
Somebody’s got to break the streak
Because master got these fake gangsters sitting down to take a leak”

The subject of realness and credibility is pervasive on “Solitary Confinement.” “I Got Stripes” is a trunk rattling anthem dealing with authenticity and credibility. “Who Killed Realness” is a moral telling story that deals with the honesty that is often missing from rap records. K-Rino touches upon more than social and political trends on “Solitary Confinement.” “Dem Laws” finds K-Rino and his brother K-Water voicing the common problems that arise between police and minorities. “The Love of Life” is a slower, R&B influenced track where K-Rino details the ups and downs of a particular relationship he had. Despite a few weaker lines, including “I started feeling like Tom, because I needed My Space,” K-Rino’s story telling is compelling and ultimately the song is about rolling with the punches and moving on when love goes awry.

For those fans worried that the sharp lyrical attacks are missing from this album, they need only tune into “Forensics,” “Barbed Wire Discipline,” and ” Grand Deception” to get their fix. “Grand Deception” is especially dope as K-Rino skillfully dissects the symbolism found on the common U.S. dollar. The concept songs I mentioned earlier are in full effect on “Solitary Confinement” in the form of the title track and “Talkin’ To Me.” Outside of the lyrical displays, K-Rino does a great job of making songs that will help people through tough times. “I Didn’t Ask” is told through the perspective of a young child caught up in a dysfunctional family:

“Man I wish that y’all would stop fussing
Speak to each other with out cussing
And have a grown up discussion
Because ever since the first moment that I got here
The plot turned chaotic and the true reason is not clear
Daddy’s going off daily, momma’s starting to nag
I felt more comfortable when I was floating in that water bag
Just laying there in serenity
Now anytime you all are in the same vicinity
You go to war like enemies
But the night I was conceived and both of y’all were embracing
I couldn’t wait to leave and seek placement
Racing, with millions more chasing
Just anxiously waiting to be placed in that sacred destination
And once I came into fruition and witnessed y’all crying and kissing
I never envisioned I’d be in this position
Proper attention I’ve been missing
And even though I can’t talk yet I still wish somebody would listen”

K-Rino’s ability to place himself in other’s situation is matched by few. His socially conscious songs continue with “Phony,” a cautionary tale about people who hide their intentions, and “Long Way To Go,” which encourages us to look at the positive side of things in life.

“Solitary Confinement” is the latest in a long line of dope K-Rino albums. There are few flaws in the album. Some fans may find “The Life of Love” to be too sharp of a departure from K-Rino’s previous work. “I Can’t Tell” may also not hit with all fans, though K-Rino’s observations are good for a chuckle. Outside of those two songs, there is not a bad thing to say about “Solitary Confinement.” From socially conscious songs, lyrical onslaughts, and dope conceptual songs, this album has it all and should be checked out by all.