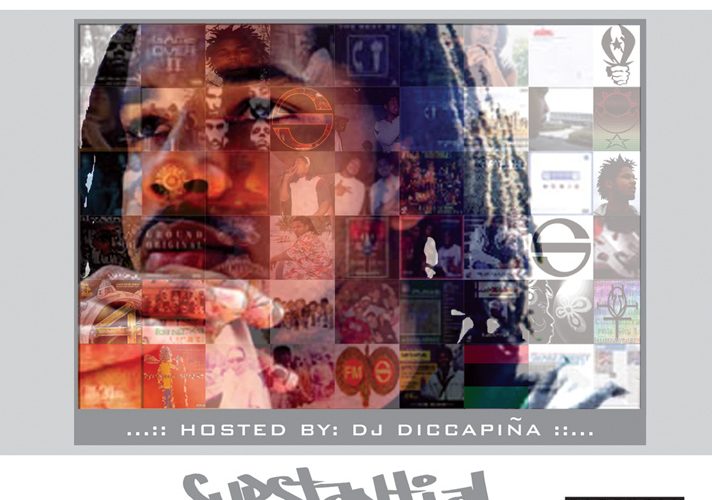 My boy Adam has been hot on this cat named Substantial for more than a minute. Other than the fact I’d heard he repped for Maryland like a motherfucker, the artist and his music were both completely elusive to me. Apparently I’m not the only one, as Unlimited Vinyl and Ope Entertainment collaborated together to create the album “Substantial Evidence.” Hosted by DJ DiccapiÃ±a, the album serves as a compilation of Substantial’s best work from 1999 to 2003, taken from various indie releases and cypher sessions someone had the forethought to record.

Perhaps we’re jumping too far ahead though. Here’s a little background from Substantial’s bio, for those of you who like this reviewer needed to be initiated on why his mic mastery merited a “best of” CD. Substantial grew up in the state sandwiched between Pennsylvania and Virginia, making him a East coast artist but giving him just a hint of that Southern flavor to his flow. As he grew up, Substantial considered Rakim, KRS-One and Common Sense the best of the best, and their styles influenced his own rhymes and his penchant for witty verbals and immaculate breath control. Sub has won prestigious events like the “Ultimate MC Battle” held at Rutgers U. in 1999, opened for artists from Beatnuts to Brand Nubian, and even headlined a “Hyde Out Productions” tour of Japan. Now residing in Brooklyn, Substantial continues to develop his lyrical skills while making guest appearances on records by hot underground acts like Extended Famm and Tonedeff.

Now that we’re all up to speed, let’s take a look at the “Substantial Evidence” that’s been piled up on this 74 minute long, 31 track deep CD. The simple and effective boom bap swing of self-produced tracks like “Invisible Man 2” highlight Sub’s baritone flow and smooth delivery, and I really dig the clever usage of Bobby Caldwell “What You Won’t Do for Love” samples in the chorus. With all of this put together and a title that seems to imply Ellison-like levels of depth in lyrica composition, does Substantial deliver on the mic? Indeed he does:

“Run mysterious melodies like Danny Elfman
Beat down rappers and paramedics for helpin
Trapped in this ice age, but it’s slowly meltin
Cause I’m a walkin blow torch, plus I’m real thorough
Got balls so big, they come in wheelbarrows
Commercial cats be funny to me, like Will Farrell
Talkin nonsense like ‘You ain’t keepin it real!’
When it’s just what you can’t relate to, we don’t feel
It’s just a fact of life, all you cats that write
need to know +Invisible Man+ I am
cause you don’t hear or see me though”

Damn, that’s fresh. Substantial’s not only got the writing ability going for him, his charismatic flow and well defined concept of breath control (being a fan of KRS-One’s work pays) make him a pleasure to listen to, time and time again. Not all of Substantial’s tracks are self-produced though. You can’t front on the dopeness of the DJ Spinna remix on “If I Was Your Mic” for example, which flexes a unique mixture of grimy heavy beats combined with light airy notes to create an atmosphere that Substantial is floating along somewhere in the middle of dopeness. Rappers have visualized themselves as guns and blunts before, but Substantial is so infatuated with his mic he wants to know just what that would be like:

“Hear footsteps headed toward me
Oh my God, there is a whack MC headed for me
To the wire I’m connected, unable to exit
Escape’s impossible, OH NO he’s got me
in a chokehold, please make him put me back
Why me black? I scream frantically, causin feedback
[…]
Losin it, slowly becomin suicidal
Cause of his weak recital, crimes is dumb homicidal
I’m trapped there, wonderin why the others didn’t want me
I coulda avoided this whack nigga spittin on me”

There’s no question from listening to “Substantial Evidence” that Sub is one of those rare versatile hip-hop artists who can flex on both sides of the board. His beats are up to par and his rap ability is a step beyond the most of the mediocre MC’s who debut today, which makes the various references to him being the “+Best Kept Secret+ since Diamond D” seem all the more apt. The collection itself might not be his best showcase though, despite being so laden with material. Things do start hot with “Home Sweet Home” and “Invisible Man 2” but some of the radio drops and freestyles that come in the middle tend to water down Substantial’s impact and leave you lost trying to catch the flavor that “Substantial Evidence” is supposed to be all about. It’s not clear to me that “F.Y.I.R.B.” needed both the original and the remix, the latter showcasing Extended Famm more than Substantial. It’s cool to hear his freestyles from “The Next 24,” but they’re not a good substitute for full length songs. Where Substantial is most on point is on songs like “Let’s Do It” with Flo Brown and “Without You” where Sub flies solo on tight beats and gets to draw out full-length concepts instead of just going for punchlines. There’s no question you should cop this album to hear some of the best of an up-and-coming fresh lyricist, but I would have been just as happy with a 40-50 minute 18 track album that winnowed out some of the freestyles and appearances by his homies and allowed Substantial to shine that much brighter.