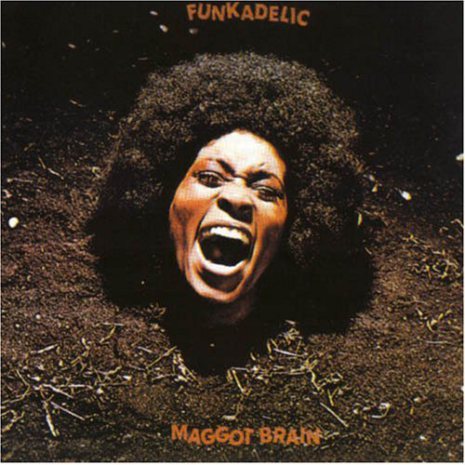 Seeing as how a Jimi Hendrix DVD review was sighted on this here site not too long ago, I thought I’d take the liberty to spare some ink to a record that remains, to this day, among the most mindbending musical excursions you could hope to embark on. Having been raised on a steady diet of Black Sabbath, Cream and Blue Cheer from an early age, my penchant for all things psychedelic and otherworldly had, up to the age of 16, been satiated by my father’s record collection and mixtapes I obtained from the smelly plaid shirted record clerk at Second Spin. Gradually, I became ravenous. You could only listen to Black Sabbath’s “Master Of Reality”, T. Rex and Hawkwind bootlegs so many times before you yearned for something even more grandiose, something that aspired to even greater heights of drug-induced depravity. Enter Funkadelic.

It is truly hard to describe my virgin experience with George Clinton’s ragtag crew of extraterrestrial funk commandos- here was a sound that had all the sonic density and mind-altering HEFT of a Blue Oyster Cult, all the funkiness of Parliament, all the hip-swaying sexuality of the Kinks, with an understanding of texture and dynamic that rivaled prog-rock champions like Jethro Tull, all anchored by some of the most sublime fretwork I had ever heard. How on earth I had neglected Funkadelic up to this point was flabbergasting, considering my love for bands like Faith No More, Bad Brains, Living Colour, Primus and Fishbone, all of whom clearly owed a tremendous debt to Clinton’s troupe of miscreants. Bluesier than Cream’s “Wheels Of Fire”, with as many licks as your favourite Humble Pie record, jammier than German Oak, arguably funkier than any of Clinton’s other endeavours, just as heavy as Blue Cheer’s “Vincebus Eruptum”, this was funk projected through a purely rock n’roll aesthetic, velvety soul on a major acid binge. A sweaty explosion of black expression that overwhelmed the listener and culminated into a brilliant burst of pure sonic orgasm.

This is not the funk you see appropriated for TV commercials, not the farcical caricature of pimp coats and Bootsy Collins sunglasses that graces magazines. This is funk at its filthiest and dirtiest, yet simultaneously at its most starkly evocative, soulful and emotional. Much of the record’s emotional weight is siphoned through the magnificent fingers of one Eddie Hazel, the breathtaking virtuoso whose jawdroppingly emotive and creative lead guitar work catapults him into a sacred pantheon where only Iommi, Clapton, Allman and Mustaine preside. The GLORIOUS title track that opens the album affirms this perhaps more than anything else on the record- while a 10 minute instrumental track sounds absolutely outlandish to anyone not familiar with prog rock and blues rock traditions, “Maggot Brain” is anything but tedious- on top of a bare, skeletal synth melody, Eddie Hazel transforms his Stratocaster into a channel for melancholia, loss and desolation. THIS is the track that should have been named “As My Guitar Gently Weeps”- in the hands of Hazel each note is a morose, mournful cry of despair, screaming with a poetic sadness and disenchantment that Morrissey would find hard to cohere in lyrical form. Better than Hendrix? Hell, I’d say so.

“Can You Get To That” is considerably more upbeat, though it treads a similarly unconventional path. The folky, jangly acoustic guitar-driven ditty is almost Fairport Convention, Pentangle or Fleetwood Mac-ish, certainly bizarre from a band lead by one of funk’s grand wizards. Yet, in Funkadelic’s hands folk pop is mutated into something different altogether- a gospel choir imbues the song with a profoundly soulful feel that is distinctively Funkadelic. “Hit It and Quit It” is decidedly different, a ridiculously infectious barnstomper of a track that is driven by a criminally thick, sludgey bassy groove, adorned with the sensual come-ons and flamboyant swagger of Brian Jones era Rolling Stones, ornamented by xylophone flourishes, choir backup and a great performance by keyboardist Bernie Worrell, who infuses the work with a piquant texture that would make Rick Wakeman (Yes) proud.

It is around “You and Your Folks, Me and My Folks” that things start to get really psychedelic. The drum sound here is warped and distorted to resemble the seismic rumble of the bass guitar, each hit of the toms sounding like a netherwordly eruption. While the constant “Yeah, Yeah, Yeah” refrains are innocuous enough, the serpentine groove and unearthly, extraterrestrial feel of the percussion suggests something much more nefarious, more nightmarish, a hellish romp through the gratuitous pits of unashamed sexuality. “Super Stupid” is the obvious peak of this trip through drug-induced delirium- the riffs are overdriven and blaring in a Black Sabbath way, Clinton’s vocals are more manic than anywhere else on the record, the rhythms are insistent, fiercely hypnotic, urgent. If “You and Your Folks, Me and My Folks” is the pre-emptive hymn at the gates of hell, “Super Stupid” is the bonafide celebration of all things infernal and wanton, Eddie Hazel’s blistering licks and George Clinton’s frenzied incantations stoked by the scorching hellfire of rock n’ fucking roll., the band affirming that they are just as good at writing rabblerousing rock as frothy soul and writhing funk.

Bizarrely, the proceedings get even more nightmarish at this point- Hazel’s lone guitar continues to moan at the conclusion of “Super Stupid”, serving as the prelude for the freeform jam that constitutes “Wars Of Armageddon”. Tribal percussion provides a zesty base upon which muted riffing, percolating basslines, warm keys, searing wah-wah’d licks (that pan in and out of the mix, in true drug rock fashion) and random reverbed vocal exclamations coagulate into one sticky, resin-coated mess. Gradually, the repetitious rhythms and screeching guitars coalesce into one ugly, snarling whole, dipped in swirls of white noise to conclude a work of absolute genius.

Everything about this release is genius, and this genius is absolutely beyond contestation. The production is bursting with personality- fuzzy enough to stand alongside the greatest hallmarks in analog classic rock, clear enough to allow each instrument to sparkle. It begins by thrusting you through the abysmal depths of solitude, explores the stratospheric euphoria of the purest high, the celestial heights of drug-induced bliss, the hellish caverns of the inevitable comedown. If there is one minor complaint, it’s that there isn’t another “Maggot Brain” to more vividly illustrate the somber sobering process that must entail every escapist episode. Still, this is a tiny complaint to lodge about an album that is, in every single way, a celebration of all things soulful, funky and mind-expanding about music. Anybody with any kind of interest in music should explore this record immediately, I guarantee you will be just as dumbstruck as I was 5 years ago.