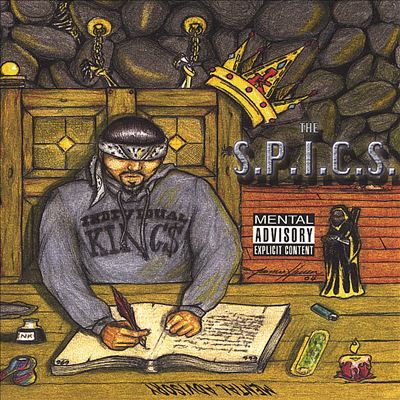 I must admit, I laughed out loud when I first saw the cover to this record. The side of the packaging indicates that the group is called Spanish Poets Invading Colorado Streets, but if you flip over to the cover, you’ll notice the acronym S.P.I.C.S. Gimmicky? Maybe, but it is certainly amusing. The cover art is also intriguing, a tastefully drawn cartoon with a mirrored inscription of the title. If nothing else, these cats must have a sense of humor.

Joel-C and Cryme Dawg make up the S.P.I.C.S., and they have been kicking rhymes for a minute on the local scene. A maxi-single from way back in ’99 made some noise in Denver, and they were featured on a compilation called “12K- Individual Kings Kompilation.” “Mental Advisory” is their first stab at a full-length album, though they have definitely had practice to prepare.

“Time 2 Get the Shit Started” opens the disc with some very formulaic clinky sound effects and run-of-the-mill drums. The production here is simply neither catchy nor creative. The duo’s rhymes are not complex, nor do they contain interesting subject matter, but they have commanding voices. The track is really just not memorable at all, because there is nothing even faintly new about what is said or heard. It is professionally done but doesn’t have anything else going for it. “S.P.I.C.S.” is more of the same. The beat should get the undiscriminating listener’s head nodding, but the rhymes are empty. Lines like “guaranteed to succeed even if it means slanging weed” do not tell us anything about the artists, and they are vague enough in describing feelings and events that their styles are nearly indistinguishable. The tempo is similar to the previous track as well.

Throughout “Mental Advisory,” the duo tries out a number of concept songs, with little success. “Phlatlighn” is an introspective track about death, but Joel-C and Mr. D-A-W-G perform muddled raps that are difficult to follow. Mr. D-A-W-G’s beat is quite similar to the rest of the production, but slowed down a bit for variety. One of the best moments on the record arrives with “Talez of Betrayal,” simply because the lyrics about fake friends are more descriptive and direct than nearly everything else. The beat sounds nearly identical to “Phlatlighn,” so there is not much variety on that front. Each song does seem to show the S.P.I.C.S. potential a bit, but does not realize it fully.

There is also a plethora of bouncy songs that are likely intended for club success. Unfortunately, they all suffer the same fate as the others. The same types of generic production tricks are used, and the rhymes don’t improve over the speedier music. Essentially, the club tracks are sped-up versions of the others. It’s not quite that simple, but each of the seventeen tracks ends up sounding quite similar. Over such a long disc, variety is needed badly, and neither the beats nor the rhymes provide. I mentioned earlier that I thought they would have a sense of humor. Well, they don’t, and it would have helped immensely.

There really is some promise shown on “Mental Advisory.” Everything is professional, which sounds stupid, but I’ve heard some pretty wack shit in my day. Conceptually, they have the right idea, their rhymes are just not honed enough to stand out. The musical side of things has a similar problem, because Mr. D-A-W-G is competent in the ways of rap production, but does nothing to set himself apart from the rest. Some refinement of their respective styles will get them a long way, but until then, they will have to be content with regional attention.