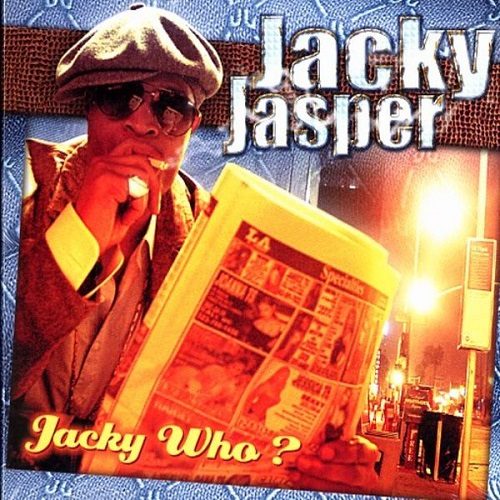 Jacky Who? To fans of a certain multiple-personalities-flaunting rap enfant terrible, the name Jacky Jasper is likely to have a familiar ring to it. Either as Jacky Jasper or under his original moniker H-Bomb, they heard him make appearances on Kool Keith-related releases by the Diesel Truckers, the Analog Brothers, Thee Undatakerz and Dr. Dooom. He joined Kool Keith and Marc Live to form the groups KHM and Clayborne Family. Again in collaboration with his mentor, he is due to realize another full-length later this year. But first, Sean Merrick gets ready to release his third solo album after 1998’s “Narcissism” (as H-Bomb) and 2002’s “Keep My Sh*t Clean” (as Jacky Jasper). For whatever reason, “Jacky Who?” reaches us by way of France, where it is released by Junkadelic Zikmu, whose DJ Junkaz Lou contributes four beats to “Jacky Who?”

Legend has it that Jacky Jasper used to be what many other rappers only claim to be – a pimp. Maybe that really is just a legend and an album like this is homeboy’s way to live out some personal fantasy. Or could it be his humorous take on all the self-appointed players and pimps that infest hip-hop and popular culture like a particularly resistent strain of bacteria? It’s hard to tell these days, and even harder when your subject hangs out with Kool Keith. You never know what’s gonna rub off there. Billed as a hommage to Iceberg Slim, the album, although off to a good start, reveals itself as rap muzak it’s hard to imagine an audience for, outside of a small core circle of Kool Keith completists. And even they have, I’m afraid, to be told that their idol makes no appearance whatsover on this record.

“Jacky Who?” does, at least initially, succeed musically, combining unorthodox samples with the mechano-funk of a Dan The Automator. After an attention-grabbing intro “I’m Going for Mine” shifts into gear, powered by a sinister surf guitar, decked out with sound effects from the Dr. Octagon library. The title track that follows is a “Superfly”-like theme song, complete with a sung hook. “I’m Smokin” with its airy but reassuring piano is like a soft cushion inviting you to fall back on. “Game So Outtasite” lays it on thick, blending big band horns with southern synths. When they’re at the top of their game, Jacky Jasper and co-producer Phil Cole have the ability to turn trash into treasure, incorporating a cheesy melody here, a bulky bassline there and coming up with more than just beats, but tracks with character. “Hurt U” for instance combines the most disparate elements to a soulful collage. Around halftime, though, the wheels begin to fall off “Jacky Who?” as it turns increasingly generic. “Pay Me in â‚¬uros” is a drab exercise in stuttering synths. “Want U” is what it would sound like if DJ Paul & Juicy J decided to be advantgarde on purpose. “It’s Jumpin” and “Get Down” might be potential club material, but they emulate established formulas too blatantly to score with any kind of crowd.

Clearly the album’s biggest asset are the vocals. It’s not often that an indie album displays such a professional use of background singers. But even more importantly, Jacky Jasper himself possesses the rare gift to communicate with beats beyond the mere levels of flowing or melody-mimicking. There’s nothing notable about his patterns, but he can add flair to a song. How he injects the title track with traces of melancholy is surprisingly sophisticated. On “I’m Going For Mine,” he comes close to Beanie Sigel’s defiant drawl. Unfortunately, a lot of that vocal potential remains unfulfilled. He’s trying to put on a show, he’s trying to be funny, but seems too lazy to put enough effort into it. Sooner or later, you get bored with his basic rap style, especially since there’s virtually no break from the simplistic content. If there’s one thing that pushes this album over the edge into oblivion, it’s the lyrics. Largely arbitrary, arranged in an abstract, choppy manner they reveal a rapper with no sense of direction: “I hit proper, chief rocker / show-stopper, bust back at a copper / Jacky Jasper hit the chali’ with the rasta / speak easy with a cappo eatin’ pasta / Get slick and get hip when I rip / Me, the captain, the skip / walked the plank and slipped / Trick, game come true / What you do, any crew got a Judas / cop-caller, crime-stopper, play the joker / Minor siblings playin’ poker / It’s precise, you poltergeist / I turn x to sess, murder the antichrist.”

To Jacky Jasper’s credit, “Jacky Who?” sticks largely to the script. “You a UFO posing as a MC” is about the only Kool Keith-ism you’ll get to hear. But he brings an out-of-place battle mentality to the table, which may ultimately be what prevents him from coming up with more substantial lyrics: “I’m slicker / your money slower, mine quicker / No lay-offs or day-offs, I pay cops off / You got kicked off the court, dude, stay off / Tell the truth in the booth, I’m overproof / jack your loot, shoot game my paper route / Exquisite, pay me to kick it / Street life restricted / I chop, you serve it / Extreme supreme game, live in a dream / misdemean’, directin’ all scenes / I spit what I spit, do what I do / hey, who say easy money has no value?”

Despite claiming otherwise (“Game So Outtasite”), this particular pimp’s game is far from out of sight. For an alleged “pimp extreme,” Jacky Jasper’s rhetoric is surprisingly limited. On the West Coast alone, there are countless rappers who put on a more convincing pimp persona. So if you wanna “re-up on your game,” as Jacky suggests, look elsewhere. Given the strong competition, Jacky Jasper would have been well-adivsed to take a different route and tell tales of joy and pain, of loss and gain. Sadly, “One For the Money,” which starts out like a song about the corrupting power of the dollar, joins the rest of the pointless babble. The best track by far his “Can’t Go Outside,” where Jacky relates the story of a big shot fearing for his life. Here, everything falls into place – lyrics, performance, beat.

If fully realized, a theme album like “Jacky Who?” would blend the effortless cool of the pimp with his insight into human behavior. Instead, you get half-assed player rap (some of it downright commercial) for a ‘underground hip-hop’ crowd who probably can’t tell the difference between a Suga Free and a Chingy. For the educated listener, this is a fun CD for the first couple of spins, but it fails to generate much replay value.