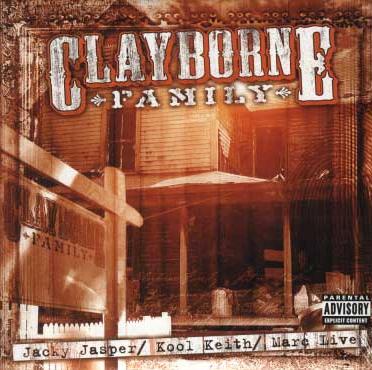 Even if Keith Thornton doesn’t go down in history as the greatest rapper of all time, he’ll certainly have a fair argument to being one of the most prolific. The fact he can simultaneously claim to be one of its most bizarre only enhances his already grand reputation as a hip-hop pioneer and recording artist. He may be best known as Kool Keith, but that’s certainly not stopped him from rapping under a dozen or more different aliases – Black Elvis and Dr. Octagon among them. He may be best known as a member of the Ultramagnetic M.C.’s, but that hasn’t stopped him from forming and being part of a variety of different groups – Cenobites and Thee Undertakerz among them.

Oddly one of the least well-known of Keith’s many aliases and side projects is the Clayborne Family, which may actually be one of the best he’s put together to date. The principles of the group are Keith himself and his two best-known proteges, Jacky Jasper and Marc Live. Individually each of the artists is talented but often find themselves hard-pressed to focus their creative energy into tracks that aren’t incoherent ramblings over inane (and in Keith’s case often self-produced) beats. By putting the three together on one album for an entire project, the worst parts of their tendencies seem to have been distilled away, resulting in a pure blend of interesting rappers over hardcore beats. Taking a drink from the slinky pulsating bass driven “New York City” results in total intoxication:

Keith: “Is that the best vocals you give?
I passed your structure, you think its okay?
Motown needs to see me, deliver your cassette
Amateurs embarrass me, give me somethin’ to play
I’ll sit in the big meetings with Damon Dash
Urinate on your shoulders, my delivery is arrogant, I expect cash
Don’t play anything cartoon in front of Mike Viv, ask Hiram Hicks
I’ll put my face on the console, my engineer sharp
I thought you spit on hits”

Jasper: “Thug ways, no way
Cabs some days, town call always, high all day
Honest but dishonest, regardless
I’m heartless cause money is endless
Not hard to get clip, you trip you’ll get clipped
The weak will slip, hit is what they get
Peeps walk, avoid the jack, don’t talk, guns spark
All money, shark fin, New York
Money’s fast, the city ain’t slow, the pay slow
With all those boroughs, yo”

Marc Live: “I like the city yo, we move quickly
Where the streets talk a lot, yo… (yeah)
And if you snitch them kids’ll get you at the chicken spot
And rock big leathers, and match the Timbs up
Lace the kicks up, a new fitted
A long chains make the chickens get real hot
Stop playin’ this the Big Apple, we take a bite out
Conference calls, blow ten thousand (yeah) – on just a night out
The Westside Highway I test my heat out
Five deep, we move fast and blow the seats out
The streets peek out, they like the Clayborne’s”

“Clayborne Family” is an album full of surprises. “This is How it’s Done” is a heavy track of black keys and mismatched chords that works like a Dr. Octagon track on acid. “Executive Decision 2004” rides over a funky synthesized horny horn track with sci-fi effects while the trio threaten to find whack rappers and “Oklahoma City your project” because “a lot of kids’ records and tapes, won’t go through their sister’s dollhouse.” On “Let Me Show Em” the backdrop sounds like a 60’s horror movie, while on the self-titled track guest rapper Guerilla Black does his gangster with “mo’ +Thriller+ than M.J. in the early 80’s” over a menacing backdrop that’s eeriely like a Carlos ‘6 July’ Broady track for Biggie Smalls. The biggest surprise of all may be that Tim Dog resurfaces on the tracks “Checkin’ Tha Doe” and “Stick ‘Em,” sounding not a bit different than he did back in the early 1990’s:

“Yo, why you rappers wanna cop my chain
Cause I’m ridin in the fo’-six Range
Are you mad cause you way in the back of the #2 train?
Yo, why you wanna make me bring the pain?
Put two in your brain and then cop a pint in Spain
Come back then drop the name a-gain
Tim Dog don’t stop the shame of fame
I come through with it, not new with it
Pass you the mic cause I’m through with it”

While on the whole this album may not be as dope as the much better known Masters of Illusioncollaboration with Kutmasta Kurt and Motion Man, this album once again proves that Kool Keith is often best presented in a group setting where his strange tendencies and fecal fetishes can’t be allowed to overwhelm an album and drag down the other interesting musical and lyrical components. “Clayborne Family” is not the easiest album to find on CD or vinyl, but it’s definitely worth copping if you see it.