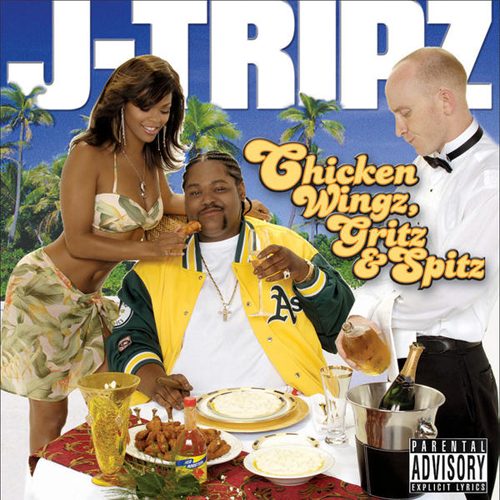 California’s J-Tripz has a prerogative: to party. As the album’s title indicates, this disc serves as a musical Sunday afternoon barbecue in July. Funky, cool, and unassuming, the album is easy listening. J-Tripz has a distinct delivery, polished flow, and respectable wordplay. But it’s his charisma that stands out. You get the impression that J-Tripz has been rocking parties long before picking up a mic.

That said, J is definitely in his comfort zone with his debut “Chicken Wingz, Gritz & Spitz”. He glides easily from track-to-track as few stray from the good vibes. There’s definitely no shortage of party anthems (“J-Tripz”, “Let’s Party”, “Smokin'”, “Clap the Nation”, “So Easily”, “3…2…1 Contact”). Fortunately, J-Tripz’s clever rhymes and the album’s musical variety prevent the album from getting overly repetitive. He describes his album’s sound in “Nassau Royale 2065”:

“Kill emcees that sound like they spit from they ass crack
Return to the studio, get your scratch back
Why you waste money on shit that’s that wack?
Take a little rock and mix it with raw rap
Take a little crunk and mix it with boom bap
Heard about it from your boy J-Tripz, a true mack
Had sick flows and big titty hoes since way back”

True indeed. The album covers the entire sonic spectrum: the synth-heavy G-funk of “J-Tripz”, the haunting piano and violins of “Gangsta”, the twang of “Smokin'”, the uber-smooth jazz of “Keep It Movin'” (assisted by highly-regarded horn player Chuck Finley), and the screaming electric guitars of “So Easily”. The glue that keeps the album together is our host. J-Tripz spits surprisingly well over each soundscape.

While the album’s dominated by party anthems, J-Tripz proves that he can diversify. Not only that, he seems to really SHINE when stepping through tougher lyrical terrain. The powerful “Misery Celebration” is prefaced with a fitting interlude:

Po’ Baby: “A lot of Black folks, a lot of po’ folks, we all in misery. Why sit there and burn in the hell of it when you can celebrate it ’cause regardless, you still gonna be stuck in it.”

J-Tripz: “You do with what you got. If you starvin’ and you get a cracker, that’s gonna be the best damn cracker you ever ate…”

Another gem is the reflective, deeply-personal “My Past”:

“A black face means an assumption of a bad life, a sad life
And the funny thing, the fact is
the hood life on TV is raising Black kids
I think about just as a people what we’ve been through
I’ve seen a lot of white cats doin’ bad too
I got a history of battery and drug charges
But that don’t mean that I’m a thug or I’m cold-hearted
I’m just all about my paper and protecting what’s mine
Threaten what’s mine, I promise I’mma bomb every time
Some stepped outta line, I had to put them back in they place
Got in my chest, got louder, got cracked in the face
Punk, you backed me in a corner and you forced me to smash
I ain’t gonna say I’m sorry but that shit’s in the past”

The album ends with “All 4 One” and heads are in for a big surprise: a “Niggas Bleed”-like narrative! After listening to the previous 18 tracks, you get the sense that J-Tripz is solid, but you have no idea he’s capable of THIS! No, I’m not saying his storytelling skills are on par with the late, great Big Poppa, but when’s the last time you heard a decent hood story, let alone from an indy label artist? J-Tripz even manages to work in affiliates Po’ Baby and “Sonny” Black, both of whom pull their weight and keep the story alive. This is how you’re supposed to end a debut album.

Even with sub-par tracks (“Smokin'”, “Clap the Nation”, “Definition” (sub-par with regard to execution, not concept)), you can’t help but admire J-Tripz’s potential. As I said, while his m.o. seems to be party tracks (and let’s face it, it’s the more profitable route), J-Tripz actually sounds BETTER when tackling trickier subjects. You can count all the artists that can do that on one hand. The key for J-Tripz will be consistency. Can he come back with a full album of “My Past”-caliber songs? It remains to be seen. “Chicken Wingz, Gritz & Spitz” is above-average, but for J-Tripz the sky is the limit. While we’re on the subject….Po’ Baby, when are we gonna get a solo joint from you?!