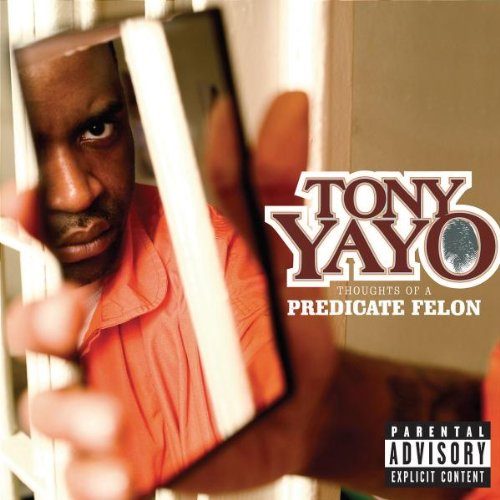 “Hate it or Love It, the underdog’s on top”

Sure this isn’t Yayo’s song, but the hit G-Unit/G-Unot collaboration describes Tony Yayo perfectly. The oft-incarcerated emcee is equally hated and loved even by self professed G-Unit fans. I myself couldn’t stand Yayo after his nursery-rhyme delivery on Young Buck’s “Bonafied Hustla.” But time has a way of changing things and before I knew it I too was “on the Greyhound bout to move these birds.” So I admit I like Yayo enough to go out and cop his album despite everyone claiming it was the worst album of the year after it leaked. I didn’t expect too much, just an entertaining album from a hustler I respected. After bumping “Thoughts of a Predicate Felon” for the last few days, it’s clear that the album isn’t only entertaining, but its also damn good music. Hate it or love it, Yayo’s debut CD features some of the best beats on a commercial release in a long time and a rapper who infuses each song with enough energy and attitude to make up for his obvious lyrical shortcomings.

The album starts off with a completely unnecessary intro that consists of a prison guard reciting instructions to first time felons, including the requisite “spread your asscheeks” detail. “Homicide” serves as the album’s true intro as Yayo attacks the track with his usual voracity. Domingo’s latin sample on the beat takes on a sinister tone as Yayo brags about murder of all kinds. Of course as hard as the track is, it suffers from too much energy as its almost impossible to distinguish between Yayo’s verses and the hook. “It Is What It Is” follows and features G-Unit’s sole West coast artist, Spider Loc. Sebb and Eminem team up on the production to deliver a pretty good impersonation of West coast funk, complete with the murky bassline and background flute. The track’s rowdy hook makes for an anthem for both coasts. “Tattle Teller” is up next and once again finds Yayo taking it back to preschool, using the childish insult as the hooks focus. Before you hit the forward button, you might actually give the track a try. The majestic beat and Yayo’s seriousness actually make the term “tattle-teller” sound at home on a rap track. On top of that Yayo’s verses feature interesting references to famous snitches and a vicious diss directed at Fat Joe.

The album’s lead single switches up the pace, as G-Unit once again finds a hot new producer to provide the background for another surefire club hit. To top it off, you can’t help to chuckle at Yayo’s attempts at singing, whether you love him or hate him. “Eastside Westside” is one of the album’s weaker tracks as Yayo’s second attempt at a bicoastal anthem will probably only appeal to diehard fans. To Yayo’s credit, the Focus beat hits as hard as any, but Yayo’s performance fails to do it justice. “Drama Setter” may be the album’s best track, even though Eminem delivers another typical dark, slow moving beat. Marshall handles the hook well but it’s Obie Trice who steals the show:

“Since Yayo is home, them AR’s is drawn
Obie’s Gorilla-Unit, fuck affiliation
We are one, it is senseless for you to prevent this
The 40 cal’ll put you up under some photosynthesis
At any given instant (gunshot) another incident
You just got a glimpse of Obie and Yay’s temperment
And we holding them Ks, that’s why homie won’t age
Isn’t it that Tony’s enraged, they thow him in cages
But now my nigga’s loose, our crews is bulletproof
All brought to you from whom’s pupils’ baby blues
His short fuses put your portrait on the news
Nigga, them screws is loose when you fuckin with them Shady dudes”

Yayo follows that verse with his own solid contribution:

“I got fat while I was gone, but now I’m here
And yall rappers only bust shots only in fear
Chinchillas on my back, itchy fingers on the Mac
Get scrilla off of crack, get 50’s shooter back
Listen homie, don’t let them niggaz amp you money
Cause I got niggaz in Queens that kill for Pamper money
Move like kaiser, Jayson Williams slaughter the driver
My daughter Maniyah, know that the kid spit fire
Reality rap, nigga check my salary cap
I give guns to my soldiers with a battery pack
What you know about light planes and heavy coke
And them drugs being smuggled on them fast speed boats
It’s the rap tycoon, Tony yall all know me
See me on MTV, I’m a parolee
I was out for twelve hours and went right back in
For three hots and one cot doing time in the pen”

“We Don’t Give a Fuck” is another posse cut that finds both 50 and Lloyd Banks spitting fire. Olivia handles the hook, and while I’m not a fan, her high pitched, breathy vocals give the track a nice touch. “Pimpin” is another track that only Yayo fans will appreciate as the unoriginal concept will probably turn most listeners off, despite the track’s bouncy production. The album’s second single, “Curious,” is noteworthy not only because its yet another successful Joe/G-Unit collabo, but mostly because it features Sam Sneed on the production. The former inmate’s subdued guitar plucks and Westcoast bass make for a catchy concoction.

“I’m So High” is another track with a Westcoast feel, that sounds a lot like â€˜Pac’s “Shorty Wanna Be A Thug” as far as production goes due mostly to Kokane’s George Clinton impersonation. It’s not a bad track, but non-Yayo fans can probably find a better weed anthem elsewhere. “Love My Style” is probably one of the album’s craziest tracks as Megahertz flips the same sample used on Britney Spear’s “Toxic.” What was once sugar-sweet pop takes on a menacing and minister tone and Yayo takes full advantage as he attacks the beat with confidence. “Project Princess” finds another G-Unit member doing what they criticized Ja Rule for, and though the track may get radio play for the smooth hook and slick beat, Yayo doesn’t necessarily make the track better. Yayo does a 360 on the next track as “G-Shit” attempts to be as hard as any M.O.P. joint, but once again makes for an anthem only diehard fans will bump.

The album ends on a high note with “I Know You Don’t Love Me,” “Dear Suzie,” and “Live By The Gun.” “I Know You Don’t Love Me” finds 50 declaring that despite the abundance of groupies, G-Unit knows what’s up and won’t mistake groupie love with real love. “Dear Suzie” details Yayo’s time in jail, specifically his interactions with a female pen pal. “Live By The Gun” also makes a run as the album’s best track. Focus provides another hard-hitting beat and Yayo, though not saying anything knew, spits with his usual energy and attitude. The only complaint is that the track is too short, with only two verses from Yayo.

Despite all the criticisms of Yayo’s rap skills, the truth is he does it as well as any commercial gangsta rapper that’s popular right now. Some may not consider that a good thing, but the truth is that Yayo is unfairly criticized. He’s by no means original, but he has an original voice and style. Take his verse and add adlibs and you have Young Jeezy, give him a southern twang and T.I. pops up. Heck, if Yayo name-dropped Kane, Rakim, and Marley Marl enough he’d be no different than Game. Sometimes this rap game boils down to picking your poison, and in this case Yayo has added a different, but equally potent, option to the list. So while others prefer their gangsta Southern-fried, or served alongside chicken and waffles, for the time being I’ll take Yayo’s robust combo of hard-hitting beats and Eastcoast attitude â€“ a dish that the game seems to be serving less and less often these days.