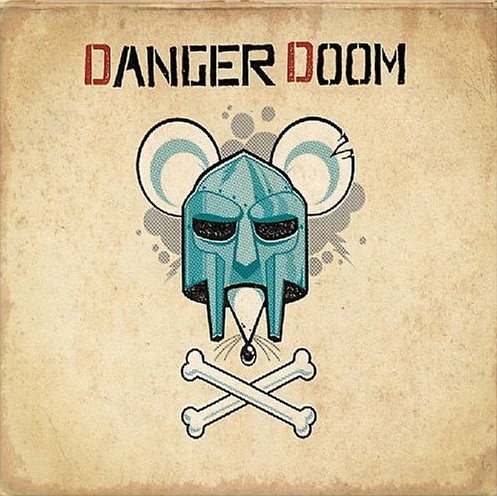 Danger Doom :: The Mouse and the Mask

My cat thinks Danger Doom is the shizzle.

Esoteric, abstract, dope and a little bit weird. You could apply that description to either producer Danger Mouse or rapper MF Doom and it would fit equally well. They have more in common than being on the lunatic fringe of underground hip-hop though – they both have a passion for animation that also fit that description. That’s easy enough to guess based on the fact the latter named himself after a Fantastic Four villain, while the former is a cartoon about “the greatest secret agent in the world” that has a suave British accent and a cult following with children and adults. Suffice it to say that both artists draw a lot of inspiration for their work from the refuse of pop culture, which in some cases is readily familiar to the listener and other times is ridiculously obscure.

The inspiration for their demented collaboration “The Mouse and the Mask” is a late night block of cartoons known as [adult swim] – the key word being ADULT. While children would likely appreciate the off-beat animation and hilarious voice acting of shows like Aqua Teen Hunger Force and Harvey Birdman, the shows do have mature situations that parents of young children would not want to expose them to. How do you explain to a child of six why a talking drink cup and a balding middle aged man are both trying to marry a Russian mail-order bride to have a live-in cook and sex slave? You can’t.

While Cartoon Network doesn’t tone down the content of the shows that appear in their late night block, they do occasionally censor the F bombs that characters like the Aqua Teens speak. This isn’t surprising really since shows like Comedy Central’s “South Park” carry a TV rating of M for Mature but still routinely bleep out the crass cuss words of their cute characters (with the exception of an occasional special episode). It is a bit irksome though that “The Mouse and the Mask” treats MF Doom like a TV cartoon character himself and bleeps out any profanity he raps. This is immediately noticeable on the opening track “El Chupa Nibre” when Doom drops the line “Rappers suck, when they spit I doubt ’em/the crap they sing you’ll wanna slap the {fuckin shit} out ’em.” It makes sense to censor a foul-mouthed cartoon that airs on basic cable television, just in case a parent unknowingly lets their child watch it before realizing that the M rating was not facetious. Why Epitaph Records would censor a rap album for adults though – a rap album inspired by a block of cartoons equally intended for adults – is utterly unfathomable. It makes you want to take Doom’s advice and find an executive at their record label so you can “slap the fuckin shit out ’em” too.

Other than the unnecessary censoring “The Mouse and the Mask” is an excellent album; that is to say, it’s an excellent album IF YOU’RE IN ON THE JOKE. If you’ve never stayed up late at night watching shows like Robot Chicken and Space Ghost Coast to Coast, the concept of this album will miss you entirely. It helps to know who the characters from the AS shows are given they make frequent cameos throughout the album. Master Shake’s are by far the most hilarious. He repeatedly calls Danger Doom’s answering machine, leaving equal amounts of both begging and threatening messages trying to secure a guest rap appearance on his project. There are guest appearances from non-cartoon characters as well, such as Ghostface Killah on the ill multi-layered dusty samples of “The Mask” and Talib Kweli on the swinging horny horn 70’s funk of “Old School.” Still it helps to be familiar with the shows so that you’ll get the inside jokes, like what the title of the song “Sofa King” is a reference to and why Carl and Meatwad’s debate about what real music is at the beginning of “A.T.H.F.” is so hilarious. The irony of the latter track is that the theme song for the show itself is a short rap by Schoolly D. Doom breaks that mold and resets it with extra attitude by telling listeners who don’t feel Master Shake they “can suck his straw, it’s hot pink.” Damn! For those who can laugh at Harvey Birdman, a former superhero turned inept lawyer that represents criminal cartoon characters as his crazy clients, “The Mouse and the Mask” will be right up their alley.

By the by I wasn’t kidding about my cat. Usually she runs away when I turn on the stereo and blast hip-hop beats, but she happily curled up on the floor and listened to “The Mouse and the Mask” from start to finish. Maybe it’s because it was produced by Danger Mouse. I wonder how she’d feel about an album produced solely by Kool Keith.