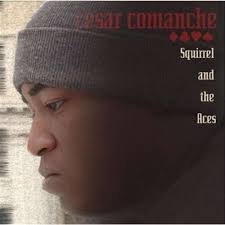 Cesar Comanche :: Squirrel and the Aces

The most interesting aspect about this album is that Squirrel and the Aces was the name of a band the rapper’s parents played in in the 1970s. For some reason, Cesar Comanche doesn’t deem it necessary to disclose that fact anywhere on “Squirrel and the Aces.” As vital as it is, it is an information you have to obtain elsewhere. He repeatedly refers to himself as the Son of Squirrel, so maybe that could serve as a clue, but it’s still a strange omission considering the amount of less relevant comments the Justus League member makes during his 50 minute set. To Cesar Comanche’s credit, “Squirrel and the Aces” does give off some sort of retro vibe, partly due to his own vintage adlibs and intros, partly due to the soul-infused production courtesy of fellow JL-ers 9th Wonder and Khrysis. The Jacksonville, NC native has been working with 9th Wonder since 1996, is a founding member of the Justus League, and has two longplayers on his own Defenders of the Free World label to this credit, 2000’s “Wooden Nickels” and 2002’s “Paper Gods.” In 2005, we’re to expect “better beats, “better words, better songs,” Comanche promises on the 9th-produced opener “Get Ready,” before he’s “off for the ride.”

It is, by all means, an uneventful ride. To be perfectly clear, there is nothing wrong with keeping any course of events at a smooth and steady pace. Repetition is one of the key elements of hip-hop. But it’s always been understood that a certain energy level be kept, that there is a force which, while being held under pressure by certain established patterns and a cohesively shaped style and sound, powers hip-hop from within. From albums like “Squirrel and the Aces” that engery has been drained to a point that makes even the ostentatious laziness of 50 Cent seem like the demonstration of power hip-hop was meant to be. When Little Brother’s Big Pooh rhymes on Cesar Comanche’s ominously-titled “The Future,” “Cats is on a come-up / we changin’ the way that tracks is gettin’ done up,” I’m afraid I perceive this as a threat, and not as a promise.

“Squirrel and the Aces” suffers from the same paralyzing complacency that plagues many Justus League releases and 9th Wonder productions. But where Little Brother make up for the lack of musical restlessness with intellectual prowess, Cesar Comanche keeps both his lyrical content and his vocal performance utterly and completely basic, repeating his simple findings ad nauseum. He ponders the “Up & Down” course life takes, but doesn’t really touch more profound levels than “Those times when you win are sweet / It’s mad when you taste defeat.” On “The Downpour” he declares: “I’m a newcomer, but I’m old-fashioned, [fuck] that off-beat rhymin’ [shit],” but I sure wouldn’t mind him being more ON beat than he is at the present time. Cesar Comanche is a rapper that lacks character in almost every department, from the flow to the voice to the rhymes. He sounds unconvinced, and therefore is unconvincing. I don’t think I could stand next to dude in the studio without giving in to the urge to pinch him to put him out of his wavering misery. With only the best intentions, of course. Like making sure that his own words “A lot of rap crews get laid off because lyrics are not enough, beats ain’t up to snuff” won’t turn into a self-fulfilling prophecy.

Thankfully, not all tracks are as simplistic as “Miss You (Remix),” where Cesar and 9th compete for who can get on your nerves first. The latter comes up with a dreamy soundscape for “The Life,” a soft cushion filled with harp-like string notes. Nicolay’s ambient “Wrong One” would work without the swishing snare, DJ Resident makes acceptable use of the scratched hook format on “The Future,” Khyrisis reaches back into the blaxploitation era for the full-sounding “The Grind,” while “The Downpour,” produced by Cesar in conjuction with L In Japanese, is almost funky. But overall musically “Squirrel and the Aces” borders on easy listening slash elevator muzak and features a rapper who seems unable to come up with any insightful input. He may have been around the world with the Justus League, but that seems to have provided him with little inspiration apart from wanting to make songs about touring and being away from home. With his guests (Supastition, Eternia, Tajai, various Justus Leaguers) and producers acting as the Aces, the Son of Squirrel leads through a CD that leaves a lot to be desired. I found that there is only one way I can possibly enjoy this album, and that’s by closing my eyes. Otherwise, every speck on the wall is bound to pull my attention away from “Squirrel and the Aces,” which quite frankly is one of the most boring rap albums to ever cross my path.