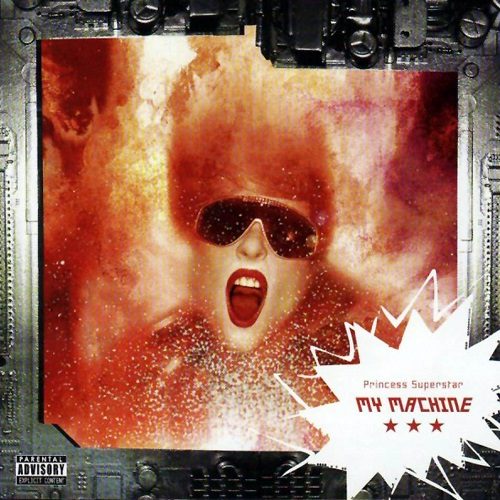 Years ago I was introduced to the eclectic stylings of the self-appointed dopest Jewish princess of hip-hop with the song “I Hope I Sell a Lot of Records at Christmastime.” I’m sure you will note the irony. As a result of the title and her association with Prince Paul, who often throws out goofy or weird hip-hop records just to shatter traditional conventions, I incorrectly dismissed Superstar as a joke. That’s not to say the song wasn’t fly, or to say that this goy wasn’t intrigued by the idea of Superstar shoving her way into the male machismo dominated rap scene of New York, but to be perfectly honest I never thought I’d hear from her ever again.

Little did I know that on the low Princess Superstar would develop a cult following worthy of her idol Kool Keith, whom she not only cut a duet with but wrote a very lascivious ode to on “Kool Keith’s Ass.” Some of his fans probably crossed over to her as a result. Others may have been recruited to her cause by rave reviews in College Music Journal, whose pages couldn’t get enough of her funky white stuff. Others may have bootlegged a few of her tracks along the way and eventually decided to pay – something the Superstar herself seems to encourage. Regardless of how she did it, the joke’s on me. Princess Superstar was already four albums deep and critically acclaimed long before I ever jumped in and picked up an LP.

Her fifth and most recent project, 2005’s “My Machine,” is a heady science-fiction trip the average rap fan might not be ready for, but those who freely mix Dr. Octagon with Devin the Dude won’t be put off by her concept. The album is ostensibly sent to us from the future, at a time beyond which people stopped keeping TRACK of time (no more calendar years) and vocal chords had become rusty and unused due to homo sapiens evolving into telepaths. Fortunately for us the envoy she sent knows the language and slyly informs us he’s got “the real story, not the press kit version” that Superstar intended us to hear about herself and her album. Follow so far? It gets deeper. It seems that at some point during the 20th century she preserved her mind (perhaps cryogenically) until such time as cloning technology made it possible for her to have thousands of “duplicants.” Her duplicants wreaked havoc on the world and future history now considers her an evil genius, although she or some cloned descendant of herself is still around in future times, and is one of the few people alive versed in the ancient art of words and rhymes. In fact in the song “The Classroom,” she’s teaching this art to the people of her era, who are used to “pathing” instead of speaking:

“Well this is fun, I know it’s difficult without tongues
But you’re young, still have lots of time to sunscreen under one of the suns
Now who wants to start, will it be you Intel Inside, or you Just Do It
Perhaps Got Milk wants to begin, oh, Coke Is It, stand don’t sit
Hit it, “Ba-da-ba-ba-ba, I’m lovin’ it,” you begin your report
Don’t use your port, use your rusty, a little dusty, mouth and larynx
Right where you used to put a sandwich
See if we can manage
But we’re gonna need a beat, in order for you to handle it
Uh, I’m teaching you in rhyme
Since archaeologists found only Shakespeare and B.I.G.’s “Ready To Die”
When time and age was counted, measured, money was pleasure
Babies branded out the ad campaigns forever
The old world was confused
Attaching themselves to the biblical by the umbilical
Ironically so much like the amoeba they sprung from, the evolution was cyclical”

The concept is only made more obtuse by the fact the people she’s addressing are named after ad campaigns, since somewhere back in the 20th people became so inured to advertising that companies started to buy the naming rights for living people AND their future descendants just to get around it. This is not the first concept album for Superstar, who on “Last of the Great 20th Century Composers” envisioned a transmission from the future after “Porn Wars” had destroyed modern society and made her music one of the few artforms to survive – hence the title. I’m also tempted to say Superstar would be better off directing these energies into writing Asimov style “Foundation” novels about psychohistory, but at least the psycho bitch be slangin’ some good rhymes. It would be too simplistic to characterize her flow as “on beat” or “off beat,” because at times she’ll do an entire rap to the tempo and others she’ll flow a stream-of-consciousness rap with more pop culture references than you can catch without pressing rewind. As interesting as the sci-fi concept and the tracks that forward the story arc along are, some of the best songs on “My Machine” could exist outside the concept altogether. Superstar is unabashedly vulgar, unapologetically crass, convinced she’s the bomb and more often than not right about it. Her raps are often intensely personal, as she professes on “Coochie Coo” that she’d like her man to “take one for the team, eat some cookies [and] lick the cream” (if you don’t get it I won’t explain) and on “Quitting Smoking Song” she vents her frustration with the toxic addiction:

“Well this is the hundredth, billionth time I’ve tried to quit
So sick of it, wait, shit, I gotta cough and spit
I was a bitch before but now a triple bitch, bitch, bitch
Slipped on day six and stick patches on both tits, oww
Ripped ’em off with a rash, sick of the crap
Sick of payin’ nine bucks a patch, sick of keepin’ track (anybody got a match?)
Throw the pack in the trash and blow one fast and light it up
(You shouldn’t do that), you know, I know, uh, I don’t give a fuck
Can I get to the end and feel bad again
Can’t call your friends cause this is the tenth time you said you’d quit
And this time I’m really gonna do it man, I got a plan
Acupuncture and bran, Nicorette, treadmill and Zyban
Man I feel weak, I feel so dumb
I got ninety-nine problems, cigarettes is number one
Gonna curse Benson Hedges, curse Philip Morris
Gonna curse you motherfuckers till I make it to the chorus”

Coming from a lesser rapper such words might come across as trite, whiny and/or self-absorbed, but the Superstar delivers with wit and panache and is often as self-deprecating as she is egotistical. She’s developed a good sense of timing over the years, knowing when to hold back a word or phrase and then punch it in for better emphasis. “My Machine” doesn’t always deliver on the promise of her potential though. As interesting as the sci-fi concept is, at times it feels forced and might put off listeners who aren’t already her fans. Superstar wields her outsider status as a weapon to both intrigue the listener and bash potential criticism, but should worry that her real credibility problem would come from beats that are occasionally lacking. Her “make me a caviar sandwich” raps on “Famous” are hilarious, but the beat is monotonous and borderline irritating. More often than not though she hits the right notes both literally and figuratively with songs like “On Top Bubble” and “Perfect,” tracks which any self-respecting hip-hop DJ could happily mix with no fear. By the time she closes the final chapter of her sci-fi escapade on “The End” it’s been quite a ride – mostly good, occasionally bad, but certainly far from boring. “My Machine” is an album where Princess Superstar decided to forgo cliche and trade it in for foreplay, and the main course is kosher white meat rap that’s surprisingly delectable even to a hardcore head more used to the pork fat raps of Scarface and The Game.