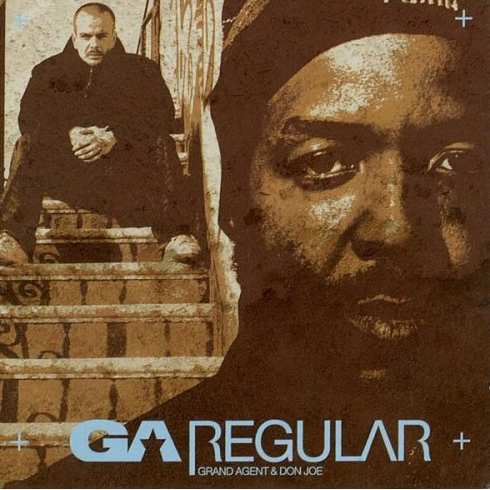 Grand Agent is a name that is new to me. His press kit states he was a Philly based rapper who relocated to Europe when the city of brother love didn’t show him enough. Rather than an indication of his skill, his relocation overseas is a trend that many rappers follow after being frustrated with an often fickle and difficult rap audience in the U.S. European fans and artists are more than willing to embrace anyone with a semblance of authenticity and realness in the rap game. It seems his relocation overseas has meant success for G.A. as he has found both a recording home, stable of artists, and producer. â€œRegularâ€ embodies all that is good and bad about rap’s international appeal as it showcases both the talent available overseas and also the different standard overseas may have for American rap.

Grand Agent is not a bad rapper by any means, as his flow and breath control are definitely on point. His lyrics even shine on tracks like â€œRegularâ€:

“(Do the math) Do the math
if every rapper shot a rapper and a half
who would hold down the ave?
need regular dudes too
but who wanna do what regular dudes do?
scrape and grind
who wanna do what regualr dudes do?
take the time to recline and make your mind up
now line up, ones to the left, twos the right
regular dudes is better than loose screws and I’m being polite
when I say “don’t get it ucked-up-fay”
hip hop hooray, you got paper to launder
hip hop hooray, paper to squander
I let ’em find ya like someting in Ruwanda
you must do it to bother me
cuz I do it for everything it’s hittin’ for
just a reminder B, yo this is just a reminder B”

But outside of a few standout moments, G.A.’s lyrics and overall style lack the complexity, energy, and creativity to compete in the rap game. Tracks like â€œClub Dogoâ€ and â€œIn The Buildingâ€ suffer from horrible repetitive hooks and generic lyrics delivered with little to no enthusiasm:

“Window to the wall and all that y’all
+Okayplayer+, I’ma make that call
+Mos Def+, I ref the whole set
since I’m one of the last official
It’s all copaset(ic), no this ain’t government issue
It’s G.A., the discovery channel from PA
be regular, I’m still the funky editor, known sexual predator
I cuts deep, what freak? you ain’t see nobody creepin’ with me
actin’ indecent with G, won’t catch me at the precint for nothing
I be on Summit ‘tween Griffith and Hutton
up in the crib, up in the lab, up in the booth
only dip out to hit the ATM and snatch loot
maybe grab some food, that’s that dude”

Only on tracks where Don Joe handles the hook with a sample of some sort does G.A. sound good. Left on his own he still needs some development in song writing. The supporting cast of rappers tend to sound more energetic than G.A., though the fact that they spit in another language prevents me from assessing their lyrical dexterity. Of the rappers who do flip it in English, Liv L’Raynge stands out only because her gruff flow and equally menacing lyrics sound forced and rehearsed.

The true highlight of the album is the production from Don Joe. Assuming Don Joe is from overseas, his production is testament to what the American rap crowd is missing out on. While you can peep his production with emcees on it, the label decided to take advantage of the empty space on this rather short release (8 tracks) and include instrumental versions of every song. Don Joe’s approach on the boards is completely old school, relying exclusively of samples of all kinds to provide his melodies and lacing those samples with mostly straight-forward hard-hitting drum beats. This approach could spell disaster for someone simply trying to mimic U.S. rap, but Don Joe flips samples like a pro and comes through with truly dope material. â€œClub Dogoâ€ is a prime example as the track on its own shines much more than it did with emcees spitting over it. Don Joe laces a hard-hitting bass pattern with sparse horns and adds a dope vocal sample and expands the horn arrangement on the hook. On â€œIn The Buildingâ€ the production once again outshines the emcees as the piano melody and deeper brass undertones make for an energetic and uplifting track. On the rest of this release Don Joe continues his trend of dope production, making the instrumental tracks the main focus of this release.

Don Joe is definitely a talented producer and hopefully one that will make his own jump overseas in the near future. Though some of the samples flipped do bear semblance to tracks already released in the states, his ability to put together tracks should serve him well. Grand Agent is a decent emcee that at times can put together good material, but needs more energy and attention to detail before he comes back home (if he even chooses to do so). While as an emcee G.A. has plenty that should appeal to hip-hop fans, both domestic and foreign, when faced with the abundance found in the U.S. its no surprise he found more success elsewhere. The combination of G.A. and Don Joe doesn’t hurt either participant as G.A. gets dope production while Don Joe gains exposure he probably wouldn’t have with local European emcees. At the moment this works well for both but don’t be surprised if Don Joe’s beats ultimately steal the show.