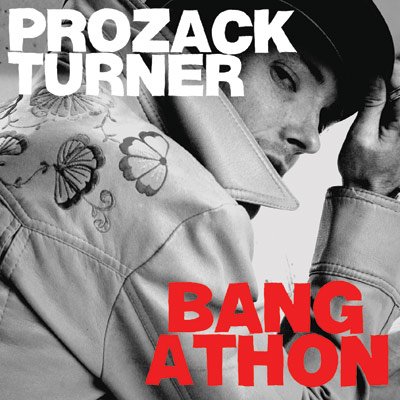 Ever since man put lyrics to music there have been songs inspired by women. From “Bette Davis Eyes” to “Roxanne” to “Come On Eileen” women have long been the muses of contemporary musicians. Then you have Prozack Turner and his contribution to this list, “The Ballad Of Adriana Sage.” Sting’s “Roxanne” may have been about a fictional prostitute, but Prozack’s ditty is about a very real adult film star.

The infatuation with Ms. Sage started while he as recording with his group, Foreign Legion. The trio of Prozack Turner, DJ Design and Marc Stretch were working on a song titled “Nasty Lady” when DJ Design mentioned her name in a rhyme. Prozack remembers “I was like, who the hell is that? Then one day I was smoking a joint and I looked her up on the web and I dunno it was just more human to me, I kinda saw the human aspect of it.” With over-thinking things being his natural reaction to being high Prozack decided to write a love song. “I don’t mention having sex with her or anything on the song, it was more a thing like you don’t have to live this life and it was really kind of hard to pen it because I didn’t want to insult her because we ended up mailing the Foreign Legion record (“Nasty Lady”) to her and she really liked it. She emailed me and we ended up talking via email and it wad never like I was trying to holler at her or anything like that, but it was just like chatting with her and I was like this girl is actually like a normal cool person, so I was lookin at her website and I was like man, that’s so crazy, the dichotomy of a porn star being a real human being.”

It was the human aspect that intrigued Prozac. “I started thinking about her family and her parents. I’m like, I wonder if she’s cool with her parents. I was high. I was like, where does she go for Christmas? You sit around the dinner table and Uncle Johnny’s like ‘hey so what are you up to?’ Is it a secret. I don’t know, I never got super personal with her, but she was always real kind when I would speak to her and it was just weird so I wrote a song. It was a fantasy like I’ll take you away from all that. It was a total high song.”

While the song may have been at least partially a result of some THC enhanced thoughts, Prozack still mailed her the song. “She’s heard it and she dug it,” he says happily. “I just didn’t wan to offend her so I’m like God I hope I didn’t hurt her feelings, that’s why there’s a lyric in the song ‘I’m not judging you / but aren’t you sick of having dudes all up in you?’ I wasn’t really judging her, but I was just like man it was more of a curious situation because I’ve got a girlfriend that I’m happy with, it was never really a literal thing like hey, let’s run away, it was more of a figurative thing.” He describes the finished product as “kind of a creepy stalker song. I had to do it, and there’s humor injected into it, as well.”

Porn stars aren’t the sole topic matter of Prozack’s album, Bangathon!, nor are they his sole inspiration. Hip-Hop, however, is one of he few things that no longer inspires him, which some might find odd being that Prozack is an MC. “I don’t get inspired by Hip-Hop the way I did when I was a teenager,” he explains, “when you’re a kid and you’ve never done it and you’ve never recorded and stuff you listen to these rappers and the beats and everything and it’s the most amazing thing and ‘how do they do it?’ Then after you’ve been doing it for a while you don’t hear a lot of stuff that inspires you anymore. I don’t hear a lot of guys who I’m like oh I couldn’t do that, or I don’t hear as many great ideas as I used to as a kid so now I look for my inspiration elsewhere.”

Musically, Prozack prefers a special breed of artist. “I like people that are loose and take risks and you can actually feel what they’re feeling.” He continued, adding “I really love Stevie Wonder, he’s on of my all-time favorites. James Brown, Parliament.” The connecting feature of all the artists he likes is “it’s all about being human and expressing yourself. I think that’s your job as an artist, to get your point across. If you have something to say you should definitely say it and share your stories and your point of view and not be afraid of the criticism of your point of view and stand by it.” Prozack also notes, “I read a lot of biographies of legendary people that I really respect and that’s how I get my main inspiration.”

Others may, in fact, be inspired by Prozack’s own life story. Though he may not be an old timer he’s already been through his fair share of pitfalls and interesting situations. Starting out as one third of Foreign Legion Prozack was associated with ABB records, which released the group’s first album. He remembers, “we did a couple albums as a group and then we were gonna get signed at Grand Royal. Mike D was gonna sign Foreign Legion way back in the day.” It never happened, but Prozack marched on. “I had a really good work ethic so I just kept recording songs and I ended up recording more songs on my own than I was with the group, just a little bit more introspective type stuff, more personal things that you wouldn’t write about in a group. Grand Royal got a hold of those songs and were like ‘hey, we want to sign you as a solo artist.'” Before they could get the contacts signed Grand Royal went under.

The Grand Royal relationship still continued, however, as Prozack explains “one of the guys there ended up getting an A&R job at Dreamworks and he called me a few months later and wanted to hear what I was up to and he ended up signing me.” Dreamworks, much like Grand Royal, would fold before Prozack could release anything. Prozack was back at square one.

Being on his own, however, provides Prozack with a freedom he enjoys. “I just kinda got tired on depending on other people to put out my music cuz it never seemed to get done right, or even get out. It was like God I have too many songs that I’m really proud of that haven’t seen the light of day, so finally I was like I’m gonna start my own label and that way nothing’s gonna stop it from going on.” The label he started was Hunger Strike and Bangathon! is his first release on it.

Now that he’s running the show Prozack looks back at his days at major labels and realizes how bad things were for him. “I had a radio department lady tell me she didn’t know how to sell my record and I needed to be more ignorant in what I write,” he remembers, “I’m like, I’m pretty ignorant, one of my lines is ‘I get more pussy than the cat box.'” While Prozack admits ignorance is an important thing to have in his music he also believes in moderation, he like to keep things both moderately ignorant and moderately intelligent. “I think you need to sprinkle your views a little bit in your music because you can scare people away if you’re too preachy or try to bang stuff down people’s throats because the youth doesn’t want to listen to that stuff. Hip-Hop is the music of the youth and the youth want to rebel so if you’re like don’t smoke, don’t eat meat, that’s boring man, you want to have a little bit of ignorance in there, at least I do.”

With ignorance and intelligence in tact Prozack feels that a release the major labels would have been happy with might have killed him as an artist. “As an artist you get this pressure to sell records, but your fans aren’t stupid, you can’t just switch it up. I had people like Mad Lib and Jay Dee and Pete Rock on my album because I though they were great, but I had the budget, I could have gotten Timbaland and The Neptunes, as well. And I like that kind of music to listen to, but that’s not the kind of music I make. I’m sure when I was on a the major they would have been real happy had I gone that route, but they still would have folded and I’d be sitting here looking like a sucker because all my fans from back in the day would be like, well dude you tried to switch it up. So at least I have my dignity in tact.”