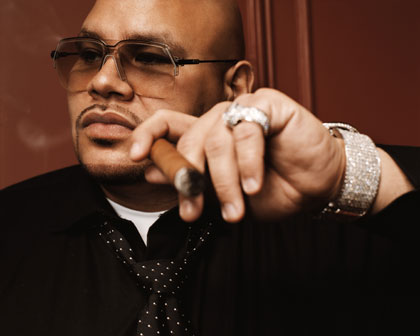 Fat Joe has seen the highest heights of success with worldwide hit songs, and the lowest lows of tragedy, losing one of his best friends. This week, with his latest album The Darkside

hitting stores, RapReviews caught up with Fat Joe to find out what he’s been up to lately, as well as who he is, and isn’t, talking to, why we don’t see huge tributes to Big Pun, and his involvement with the New York Knicks front office.

on July 27th. We got the first single with Jeezy and the second single featuring Trey Songz. We got everybody on the album from Too Short, to Lil’ Wayne, to Cam’ron, The Clipse, R. Kelly, Busta Rhymes. I’m really proud of this new album.

AB: That’s a lot of guests. You’re on the album, as well, right?

FJ: Yeah, I’m definitely on the album. What’s so crazy is you wouldn’t even realize that many people are on the album when you listen to it because I got a way of collaborating where the other artists are almost like a musical instrument.

AB: I notice you said you have Cam on your album. Are you still not friendly with 50 Cent?

FJ: Yeah. Chances are I’ll never be friendly with that guy. I just don’t like this guy. I don’t like nothin about him.

AB: So what can people expect from this album topic-wise and beat-wise? What’s the vibe like?

FJ: Real boom bap hip-hop. That hardcore hip-hop. That early Fat Joe, diggin in the crates, early Terror Squad. I just took it back to that.

AB: Have you been able to stay in touch with Remy Martin at all during her prison stay?

FJ: Nah, not at all. Me and her, we had a huge fallout before she left and we just left it at that.

AB: You aren’t exactly a stranger to legal problems yourself. Is it possible for big name rappers to stay out of trouble?

AB: I spoke with Treach earlier today and you two have something very big in common; you’re both turning 40 this year. What does it mean to be 40 in hip-hop? There’s no blueprint for this.

FJ: Yeah, wow. {*laughs*} There is none, but you really gotta truly understand that hip-hop isn’t even 40 years old so we’re making the blueprint as it goes along. There’s nothing to follow. There’s no way to say you can’t rap no more. Jay-Z’s 40 years old selling millions of records. Puff Daddy’s the biggest mogul in the world, he’s older than 40. So it’s like we’re setting the rules right now. It’s not like “yo, you got too old to rap.” There’s no such thing.

AB: Since you’re setting the rules right now, what are some of the things you’d like to see for the 30 and up crowd in hip-hop? We’re totally different than the younger crowd that’s listening to the radio, so what should the 30 and up crowd be doing?

FJ: Supporting the guys that’s bringing them the kind of music that they want to hear. Supporting meaning buy.

AB: I’d like to talk about Big Pun for a little bit, if you don’t mind. Every year we see tributes to Biggie and Pac, but not a lot is done for Big Pun. Why don’t we see more of an outpouring of affection for Pun?

FJ: You know, I think it’s because of the people who are handling his estate. (They) ain’t doing a good job at that. Part two is there’s a pretty dark side to it when his wife says the happiest thing that ever happened to her was him passing. Shit like that just turns people off from celebrating. I woulda done a much better job, but I’ve stood clear of them. I don’t really get along with his wife, so I just stood out of that circle, but unfortunately there hasn’t been (an outpouring of affection). I try to represent him everyday. Every day I’m alive and I wake up and I breathe I represent for Big Pun.

AB: Switching gears, a handful of years go you did a song with Ricky Martin. I don’t think anyone really saw that coming from you. Are there any artists out there today that people wouldn’t normally associate you with that you’d love to link up with for a song?

AB: Why do you think you’d make a great song with her?

FJ: We would just make a song from the heart, and I’m a huge fan of hers.

AB: Has her music resulted in you having any children?

AB: I know, like me, you’re a Knicks fan, but from what I hear you’re also doing some recruiting for the Knicks right now. Are you like a co-GM at this point?

FJ: Nah man, I’m an avid Knicks fan and I just want to win. I’m tired of losing. I’m a fan and they appreciate that. I’m one of the biggest voices in the hip-hop community and they know hip-hop and basketball go along and they reached out to me and it was like “Joe we really want you to help us get (Amar’e) Stoudemire.” I’m sure the $100 million got him. Me as a Knick fan, I gotta go at him and beg him to come play for us. That’s basically what I did. I did it for you.

AB: Thank you! Finally, I know you’re a huge sneakerhead. Have you picked up anything really nice recently?

FJ: Well, I got the Spike Lee Knicks sneakers that never came out. There were only four pairs of them ever made. I got those recently. I’m excited about that.

AB: Would that be a pair you keep in a safe place?

FJ: Yeah, it would be in a safe place. I would have to bust it out at the finals or a championship game.

AB: Would you wear a different pair of shoes to the game and then switch into them once you were courtside?

FJ: {*laughs*} Nah, I don’t think so, but that would be a good idea. That would be a great idea. Maybe put tape, or cotton, under them. Put a booty under it.