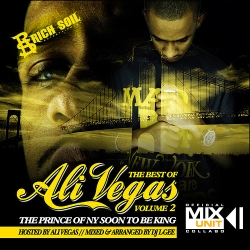 Ali Vegas is one of those rappers your friends like to talk about when you mention somebody from New York you think is hot that just happens to be a little too commercial or mainstream for their taste. “Yeah son, but you ain’t know about Ali Vegas! He’s the best rapper out of Queens since Nas. Matter of fact son he’s BETTER than Nas, but you wouldn’t know about that since he’s not on BET and MTV now would you? Ali Vegas is the TRUTH. Sony signed him to a record deal but he was TOO HOT son, he would have EMBARASSED all their rappers, so they couldn’t do SHIT with him. Ali Vegas represents for N.Y. he’s not some cornball flashy motherfucker. Get a mixtape son and get up on Ali Vegas, YOU HEARD?!”

If you want to shut your obnoxious homeboy up MixUnit.com has your hook-up, because you can indeed get yourself an Ali Vegas mixtape from them. In fact I’d dare say you can get at least two because this is the second volume and I’ve never even heard the first. Would you call this an official album? Given Ali has been around since the mid-to-late 1990’s and hasn’t had an “official album” in stores yet this is as close as you’re going to get. MixUnit.com has hooked up with some good PR people who drop me these packages in the mail, which means I get them side by side with in-store releases by artists like the Boot Camp Clik. For all I know this means “The Best of Ali Vegas Volume 2” might even be available at your local Tower Records, but I wouldn’t count on finding it at Best Buy or Target. If at the end of this review you really want the Ali Vegas album stick with MixUnit.com and you’ll be sure to get what you want the way you want it. Vegas is already off to a good start on selling this to the people with the song “You Already Know.” Reminiscent of Jadakiss’ “The Champ Is Here,” largely for the drumming sounds and the background chant of “A-li, bu-ma-ye,” Vegas nonetheless spits a completely different style from ‘Kiss with lyrics and flow largely worthy of his reputation:

“You niggaz is gassed on a full tank, I ain’t gotta pull rank
I’m boss, yeah I’ll wait
‘Til y’all get off your high horse before I floss
Everything y’all tryin to gain, I ain’t lost
Why would I palm a beretta? I’d rather put an army together
It’s death before dishonor, et cetera
Around town I’m known as a don that is clever
No more launderin cheddar; we’ll take it imported
If we make it the fiends’ll take it and snort it
Public apologies to the babies aborted by the ladies I flaunted
Momma used to tell me if you break it you bought it
Fuck it now I buy it to break it, nobody can tell me that I didn’t make it
You better get your diets in order
This year I’m eatin with a side order of vitamin water
Any gang or crew that I didn’t slaughter, last year
I’ll do it this one, make room, nigga here the prince come”

Vegas has definitely been served poorly by the music industry. He fluidly interweaves rhymes and metaphors from one line to the next without losing his place or his passion; striving to make a more complicated rap line in a way that is comparable not only to Nas but on occasion even to Pharoahe Monch. While he does do a lot of bragging in his rap, he says it in a way other cats won’t. What Vegas needs to get over with a mainstream audience is beats and promotion. He’s not liable to get much of the latter outside of mixtape releases like this, but the former he’s got in spades. “Life in the City” is a smooth R&B backdrop with Vegas dropping memorable punchlines like “I never heard a bullet scream checkmate.” The smooth pianoes of “Bloodline” serve as a reminder of why he was “predicted to rule Queens, before I learned how to tie my first pair of shoestrings.” The strangest introduction to any song may be the Spongebob Squarepants samples before “A.V. Theme,” but the lyrics definitely play into him balling better than Jay-Z and the use of children to sing his chorus in the same manner as Spongebob’s theme is hilarious. Beats range from the incredibly hard pounding “Hit the Floor” to the the super slick “Youngstas” to the highly appropriate Nas samples over the soft tinkling ivory keys of “Don’t Hate Me (Hustle Hard).” The organizers of the CD even dig deep in the crates for an Ali Vegas classic and come back with “Specialist”:

“The drama bound to stun you before the gun do
Better have a spot to run to, stash your bundle
Blue and whites come through, look outs warn us
It’s wrong how they had they guns drawn when they run up on us
Perps I’m under, words and bugger, is how they search and slug us
For wearin certain colors on the drug strip”

Ali has a natural flair to his speech and vocabulary that’s hard to quantify without comparing him to other famous Queens rappers like Nas, which has always been both a gift and a curse for this struggling rap artist. Either some people will be dissapointed that he’s not a clone of Nas, or will be mad that he’s too MUCH like Nas and accuse him of being unoriginal. Both would be a mistake. As annoying as it tends to get when people tout Ali Vegas as being the best rapper from New York to never blow up and sell millions of units, it’s CD’s like “The Best of Ali Vegas Volume 2” that prove more often than not it’s actually the truth. He’s probably one record deal and crossover hit away from making it big, but after this long it’s tough to imagine that will ever happen. At least the mixtapes will preserve the truth even if he eventually quits in frustration, and one could hardly blame him if he does.