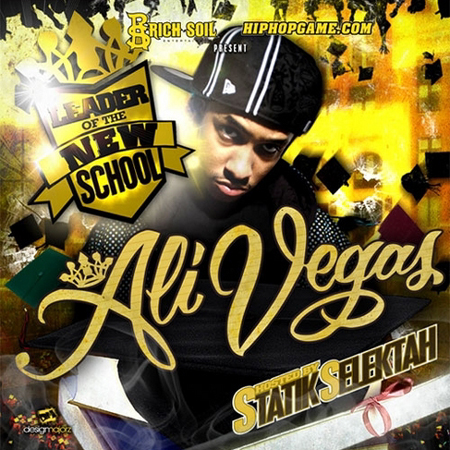 Does the world need another mixtape king? No, that’s probably why Ali Vegas refers to himself as a Prince. Ali Vegas has been on this circuit for more than a minute (“since 92” as he remind us on record). Had he actually ever had a proper album in store he’d almost be pushing veteran status. But label woes dogged the early part of his career meaning that he’s been confined to the mixtape circuit for some time now. None the less he’s got big connections. Static Selektah helms this latest effort while Premo, Scott Storch and Dre (of the “Cool &” variety) all drop by to man the boards at one time or another. The beats are by and large top draw, when there aren’t original cuts for Ali to work his craft over Static selects a variety of true-school styles that suit Ali’s mid nineties schtik perfectly. It’s a very New York orientated affair never straying into un-listenable territory but occasionally a bit unrelenting in its dusty aspirations.

As for Ali himself he makes a few lofty claims in his press material to being the bridge between the new and the old school (the 90s is now considered the old school for those that didn’t get that memo). Certainly he deals in the stock hustler rap that’s coming out the mouths of thirty-something CEOs and young hungry corner dwellers alike. It’s seldom that he deviates from the blueprint for street tales laid out by the masters he’s so keen to invoke. There’s nothing wrong with that and he does it all with the prerequisite swagger and both feet still rooted in the ground; he switches flows with consummate ease; his wordplay is pretty tight but rarely does he make his mark as an individual.

The sad fact is that Ali is clearly a talented rapper but he has created his own cage. By casting himself in the street-hustler role he’s not allowed himself any room for expansion, or perhaps he doesn’t want to expand. For someone who claims to be the leader of the new school, he seems to show a lack of genuine creativity. There isn’t anything on this mixtape you haven’t heard before. There are however glimmers of greatness peppered here and there. As Vegas recalls Biggie’s “Gimmie the Loot” and Jay-Z’ “Coming of Age” on the Premo-helmed “Everyday iz War” as he takes persona of the old and young hustler himself via some pitching up of his vocals.

“What it is
What it’s gonna be
Got me on the corner wit you
Like you tryin’ corner me
It ain’t that but when you pass
You looked at me like I was just another wannabe
And that ain’t never been me
I ain’t trying’ to play you like no son, son
It’s on these same blocks where I got the bullets for my guns from
I see you bulletproofed your whip
That just show me you ain’t forget where you come from”

Moments like this serve to highlight the pedestrian nature of a lot of his freestyles. When he gets all introspective over “Mind Playing Tricks on Me” it’s a whole lot more compelling than the money anthem (and single) “That’s Nothing” produced by Scott Storch.

Is just a whole lot more interesting on every level than:

“I could drop the top
But not on the Benz, on the yacht
The watch that I got
Got Colorado rocks at the top”

The fact that Ali chose this song as the lead off single for his new album seems to demonstrate perfectly his mindset. Back in the blingâ€“era there was plenty of room for rappers putting out inane singles like this to be successful, that’s how we ended up with Fabolous. But right now that’s not the case. Ali is stuck in this blueprint and not moving with the times as hip-hop diversifies. This mixtape is a solid, albeit unspectacular, attempt and it’d be worth checking for his album “Generation Gap 2” this month but for a leader of the new school Vegas is already starting to sound a bit dated.