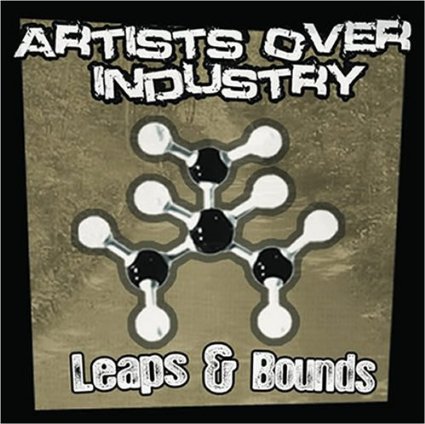 With a name like Artists Over Industry, ambitions are made pretty clear. According to emcees Inkwell the Biologic and Windchill, they are, collectively, intellectually and spiritually beyond the media. This is a popular trend amongst inexperienced and naive underground acts, to simply hate on anything more popular than they; but most of those practicing in this behavior are simply taking from the Underground Rap for Complete and Total Amateurs Handbook. It’s simple, really: download Fruity Loops on your PC, throw together some marginal Premier imitations, and pretend to despise Jay-Z. Sounds easy, doesn’t it?

Anybody can do it, and AOI are living proof. Inkwell and Windchill are those loveable amateurs who honestly think they are the best rappers alive. Essentially, “Leaps & Bounds” consists of two reoccurring themes: the dissing of imaginary rappers, and the whole idea that these guys are pretty much the best thing shy of Jesus Christ. They haven’t proved it yet, not to a single soul on the planet, but they’re determined to let you know just how awesome they are, and what better way than reminding you for eighteen songs straight?

It doesn’t start off as bad as I make it sound; “Bring it Back” is a harmless track with a cheery beat, and although the concept just about destroys a path Jurassic 5 has been smashing the shit out of since ’97, it doesn’t lose. Unfortunately enough, it is from that point on you are bombarded by an onrush of exceptionally cheesy holier-than-thou’s and admonitory counseling. I don’t know which emcee is which, in truth I wouldn’t be able to determine between the two if I did, but it really doesn’t matter; both are megalomaniacal beyond caring. “The wisdom I wield is like the light from the stars in the sky,” says one on “Rhythm & Strings.” First of all, no son, it isn’t, and moreover, WHAT??? He goes on to caution, “if you care for other people you neglect your own health,” essentially advertising… seclusion from society?

Soon enough, Inkwell and Windchill forego any logic they once employed for mindless dribble. “I shun those who can’t make sense with a sentence.” What’s this? Hostility towards the mentally retarded? Moving on: “Is this it? Man it has to be, because I feel like we can defy gravity.” Is that really that awful, or do I just have trouble recognizing genius when I hear it? How about, “even if I change my past, will it take the pain away?” Hold up – dude can travel through time now? Say word!

If there’s one positive on “Leaps & Bounds,” it’s what they’ve dug up from the record collection. Pete Rock would approve of many of the samples used, namely the jazz piano of “Insight” and Spanish guitar of “Throw in the Towel,” but yet I found myself bobbing my head to the beat maybe three or four times due to the lackluster drum loops. Doing his best to make up for this is Q-Sak, who is a menace behind the wheels of steel, cutting and scratching his way to the forefront of the LP.

“Leaps & Bounds” is not a terrible album. It plays out smoother than I give it credit for, and every aspect of the project shows “Potential,” it’s just that seventy minutes of “beware of the abyss” rap is a bit much for any mere mortal to come to grips with. Greater attention to detail would work wonders for AOI. “I walk a thin line between life and death,” they say. That’s great, could you tell us why? Maybe provide an example or five? Artists Over Industry take steps in the right direction, but they knock themselves back a few too many on this release.